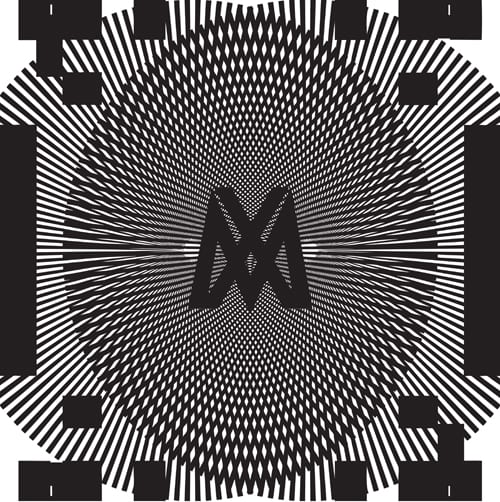 Although his latest album RIP was a more introspective affair, London producer Actress is still primarily associated with the tough, deconstructed workouts that marked the beginning of his career. Despite carving out an utterly original sound for himself: rough, dirty, analogue rollers that confound as often as they amaze, Darren Cunningham has cultivated a group of like-minded producers on his Werk label, where the likes of Lukid, Lone and Zomby have helped him plumb the depths of the UK dance scene’s inverted image. For 2013 Cunningham has found himself a new partner in crime, Moiré (on whom information is very scarce), whose mutilated, fractured sounds fit the Werk aesthetic like a glove.

Details on the producer may be scant, but the moniker’s reference to the Moiré Effect gives us a hint on what to expect: “an interference pattern created…when two grids are overlaid at an angle” (see the cover for an example). Here on the insomnia-inspired Never Sleep the listener is subjected to sudden sonic trickery and aggressive beat patterns, resulting in a disorientating aural illusion that lives up to the producer’s name. These four tracks are all rough edges and hissing atmospherics, sounds at their most potent on opener Lose It, where Moiré enlists the help of Lessons and vocalist Heidi Vogel. Here a monstrous kick thumps into view with a mutated bassline carving a powerful course through Vogel’s perfectly anaesthetised vocals and a host of atmospheric ticks; buzz-saws, whistles and relentless hi-hats all help to place the listener right in the middle of a trippy, deeply threatening soundscape.

On the next track Moiré hits harder: an ominous bass and cavernous hand-claps give way to a brief synth-led respite before that all-consuming bassline returns to drag you right back down into the deep. The pattern recurs; a brighter set of emotive Detroit synth pads shine through the murk but can never quite arrest the track’s unstoppable forward drive. Moiré’s final addition is the digital-only Into, which conjures a deep atmosphere albeit more conventionally than his first two takes. A collage of inverted diva cries, dubbed out beats and a deep ambient wash, a propulsive bass line later enters the fray to take track into moody deep house territory. It’s another impressive offering, but doesn’t quite achieve the heights of originality that can be found on the A-side.

The final piece of the puzzle is Cunningham’s own rework of Lose It, which undeniably rules the B-side of the release. With a generous helping of analogue hiss and distorting the original’s vocals into mere melodic accents, the Werk Discs boss crushes the original’s bass into a three-note refrain that anchors the distorted effects. The end result is a techno roller in typical Actress style, fashioned from warped chrome and making up for with power what it lacks in progression across its 9-minute runtime. Never Sleep is a seductive package indeed, and a tough mission statement for a newcomer with a powerful voice. With his three original tracks, Moiré lays his sonic elements on the table and proceeds to distort, mutilate and destroy them before piecing it all back together, and while the result may not be clean or pleasant, it’s certainly powerful, interesting and, despite the layers of filth that seem to coat each sound, incredibly refreshing.