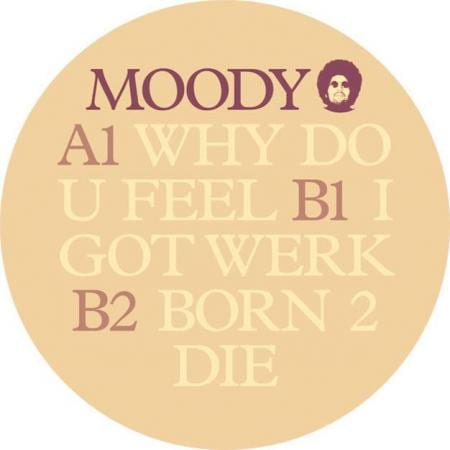 I’d be wasting my time introducing Moodymann to anyone but the most casual observer of dance music, so I’ll cut it short this time. On his hotly-anticipated new release (already sold out pretty much everywhere, would you believe?), Kenny Dixon Junior offers three diverse and predictably on-form tunes of pure groove. The definitive edition of I Got Werk is the most typical Moody track here, a warm array of background sounds create the rich atmosphere of a house party, while searing synths battle for prominence with a spare groove and a funky guitar loop. The track’s simple, but that’s not all it has to offer; you have the big man himself singing the catchy vocal hook and some bristling low-end frequencies in the breakdown that all add up to a potent combination, proving that Moody’s as on form as ever.

The tracks that bookend this central number are a little more unexpected. The closer is a remix of the ubiquitous Lana Del Ray, in the form of Born 2 Die. Guitar loops and subdued kicks deftly surround the neatly-chopped vocals, but your enjoyment of the tune will probably come down to what you already think of the controversy-bating songstress. Either way, the faltering gap at ‘walking through the- streets’ is a heart-in-mouth moment that works brilliantly by dint of its subtlety. These two tracks are well-crafted as could be expected, but it’s the title track that really amazes here. Why Do U Feel is a breathtaking journey of stop-start percussion and sweet nostalgic vocals, and easily ranks among the best tracks of the year so far. The crystal-clear voice creates a unique ambience with soft, filtering synths and clattering beats, before the tune lurches into a beautiful skipping groove two minutes in. Moodymann doesn’t leave it there though, the tune continues to mutate and surprise throughout its course; as the bass emerges and recedes allowing the vocals to shine out with an intense fragility which holds a rare power in its emotive pull, alongside a masterful series of edits towards the close. On this EP, Moodymann not only offers a classic update of his style but also a thorough modernisation in the title track, and in doing so justly holds on to his title as one of the true legends of house music.