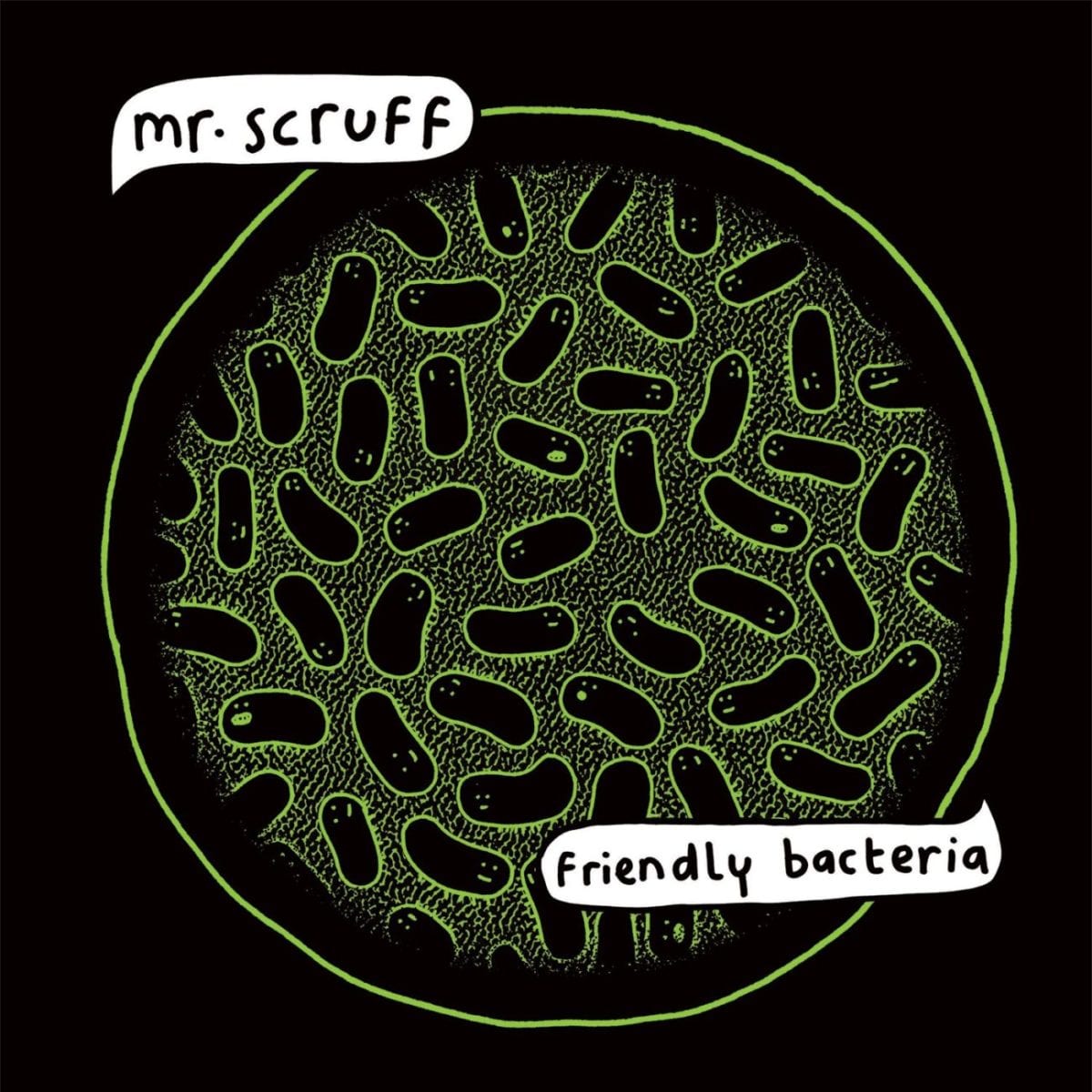 Macclesfield’s Andrew Carthy a.k.a Mr Scruff is a veteran selector, cartoonist and tea merchant who draws from an unfathomable breadth of records and influences during his marathon sets and studio sessions. Steeped in a signature degree of mirth and a definite sense of the absurd, his music is rich with idiosyncrasies while remaining informed and impassioned enough to keep dance floors beguiled for hours.

As a mainstay of the British institution Ninja Tune (as well as releasing on Mark Rae’s Grand Central), Mr Scruff has released 4 LPs and a slew of EPs that have earnt him exaltation and lead him to the release of his 5th album, Friendly Bacteria.

The drunken, whetted bass at the album’s inception makes the shelves wobble in a familiar fashion before Denis Jones’ harmonised vocal lines and flecks of percussion palpably hint towards an evolution in Carthy’s sound and production style. The subsequent Render Me rolls out more of Jones’ muted folk tones and together with Deliverance the notion that things have developed is bolstered. Hats seem sharper and snares falls harder than in his previous material as it becomes clear that this is music more focused on real instrumentation and collaboration.

While Carthy’s technique has certainly developed, a stylistic anchor remains firmly docked in ports reminiscent of Keep It Unreal and Ninja Tuna. Chugging, mid-heavy bass tones remain shadowed by his signature subs as his nifty drum work cracks and clatters through the compositions. This is particularly present throughout Come Find Me, wherein scattered drums flash and a 1-2-3 bass pattern harks back to his Believe contribution to Ninja Tune’s XX compilation, adorned with Vanessa Freeman’s sweet and soulful vocals.

The broad range of styles and tempos throughout Friendly Bacteria work to build a strengthening sense of familiarity as the album reaches a zenith at We Are Coming. A billowing acid bass puffs and hustles under pellucid cracks and vocal snippets before a bout of broken rhythm brings about a tension shift. Gamboling two-handed Rhodes lines emerge and remind the listener of his and Kaidi Tatham’s fantastic Fresh Noodles on Prime Numbers.

What becomes clear is that Friendly Bacteria is an evolution – not a change. New studio techniques and the influence of others have brought about an enlivening sense of maturity in Carthy’s production and have lifted his charming creations to a new level.