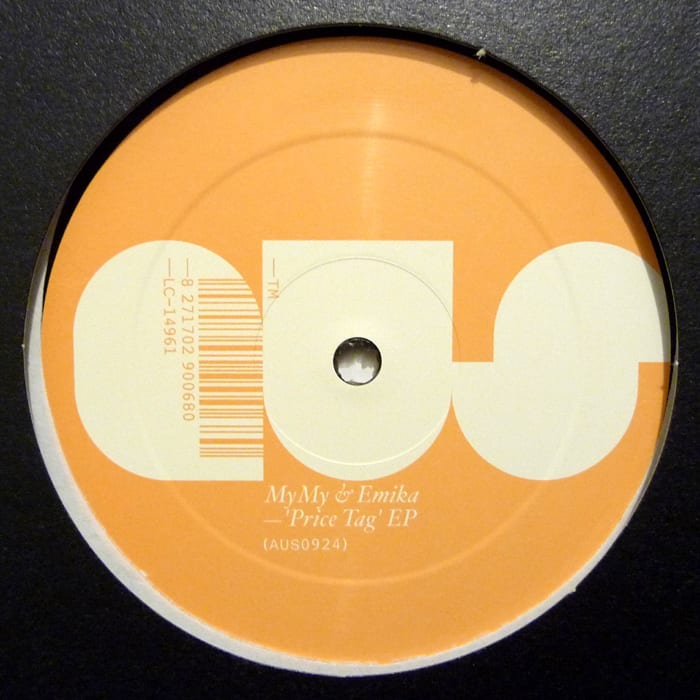 After ‘Fast Freeze’, MyMy could do no wrong in my eyes. The song (and it is a song, not a track, or a tool, or whatever else you choose to call it) was written as a song should be: it had a beginning, a middle and an end. But more than that, it exhibited an attention to melody, to sonic craftsmanship, that more producers would do well to emulate. If subsequent MyMy releases failed to a certain extent, it was only in comparison with the singular grace and nobleness of ‘Fast Freeze’. For their latest release on Will Saul’s Aus Music, MyMy have once again stuck to what they do best – woozy synths, breezy vocals, and that trademark attention to melody – but once again struggled to reach the dizzying heights they have previously set themselves.

Opener ‘Price Tag’ kicks things off with a slap-bass riff that gets yoked to mouth-wide-open vocals from Emika. Spaghetti-western whistling heralds the arrival of more vocals that scream “playful”, but are actually only playful in the way a puppy dropped on his head is playful. ‘Lights Go Down’ exhibits a more dance floor-oriented direction with tribal-not-tribal drums stomping away whilst ascending and descending synths attempt to add an eeriness that quite frankly isn’t there. The real highlight though is the Appleblim and Komonazmuk remix that teleports MyMy into a 90s London garage club, and leaves them sounding all the better for it. Refashioned as a post-garage ode to Mousse T’s ‘I’m Horny’, the vocal snippets work far better in these disorienting 2-step environs, literally dissolving before a Wagnerian doomfest of a breakdown. The digital only Sideshow remix works in the way public transport “works”: better than a horse and cart, but no Mercedes Benz.

The public transport analogy is a good one actually. Much like the thoughts of the bus driver, constantly traveling the same route, there is little here to surprise. Thanks to sterling work from Appleblim and Komonazmuk, this is not quite seen-it-all-before ennui, but it is certainly no ‘Fast Freeze’.