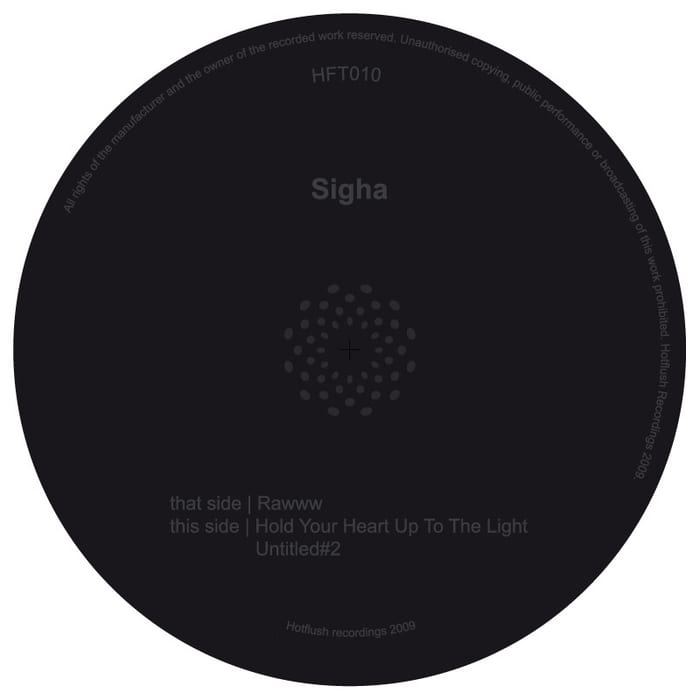 After two 12″s on the consistently brilliant Hotflush label earlier in 2009, Sigha returns with perhaps his most impressive release yet. Sigha’s earlier releases established him, alongside producers such as Pangaea, T++ and Scuba, as a key purveyor of the techy side of the genre previously known as Dubstep. Although this release continues in the same vein as ‘On The Strip’ and ‘Bruised’, it becomes clear that Sigha has well and truly immersed himself in what his earlier productions pointed towards: mesmeric dub techno, but with an injection of garage’s funk and swing.

Opener ‘Rawww’ ripples with infectious, sporadic energy stapled thinly together with a filtered, percussive synth, which runs throughout. The real joy here is the track’s unpredictability: in ten minutes the groove changes almost at will, though always so subtle that it is impossible to tell what is coming next. The drums shift and click, layering over each other, dropping out and dipping back in, shifting from minimal and spacey to a bliss of funk with just a few extra drum hits in Omar S fashion.

The first track on the flip, entitled ‘Hold My Heart Up To The Light’, has a more skippy feel to it, which for the first two and a half minutes leads to a sense of claustrophobia, before being broken by some synth builds, then again being engulfed by the shivers of drum clicks. The occasional synth blocks stop just short of breaking the delicacy of the percussion here, and the result is a track which sounds at breaking point for its entirety, without its minimality ever becoming overwhelmed.

The final track is the closest this 12″ gets to linearity, and is the most obvious on the record to be heard on a dancefloor. This, however, does little to damage the feeling of dread Sigha does so well to establish on the previous two tracks. The drop comes halfway through, doubling the energy without losing any pre-drop subtlety and from here the track continues to a natural, unforced end.

A touch more techy than his previous output, ‘Rawww’ is minimal, groove-laden, ominous and highly recommended.