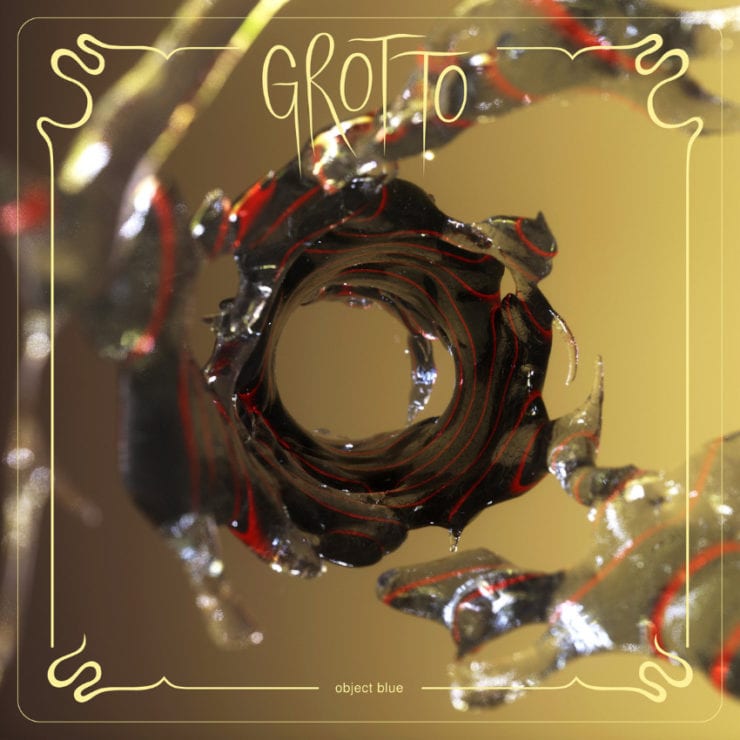 Even with a reasonably discreet back catalogue, object blue has risen to prominence as a fine DJ and live performer in the space of a few years. But while her catalogue may be small it is ultra-modern. Jam-packed with deconstructed clubbing references, canny sampling and palpitating rhythmical arrangements, all made imaginable by an ever-growing control of whatever Ableton has to offer.

On her latest EP, ‘Grotto’, the London-based producer return to TT, the home of her first-ever release, ‘Do You Plan To End A Siege?‘ after a 3-year hiatus. The production skills and sonics have changed but the aesthetic of clinical micro-processing of instruments is alive and well.

In ‘Grotto’, five macabre and theatrical tracks have been stitched together with loose and unconventional programming. Even though her grasp of sound design has matured and she is meticulous about the end product, her workflow and process can still be slightly chaotic. The exploration of sound’s potentials is evident in ‘Opened Close’, which is a frantic opener centring on a 90’s pop piano melody that has undergone a haunting anthemic trance reboot.

As an obsessive R&B and pop fanatic, references from both genres are prominent in many of blue’s past productions. This mischievous attitude of blending samples with precisely engineered beats languidly slithers through most of the EP. On ‘Fugitive’s Flourish’, another orchestral pop-leaning melody is heavy at the front of the mix, tuned with some souped-up overdrive. Bass-heavy rhythmic patterns are given structure by an irregular thunderous kick drum whilst cracking claps, wet with reverb, add percussive punch.

Blue released a “well good” ‘Hyperaesthesia‘ EP last year with buddy TSVI which was kind of like a set of redesigned SND tracks explicitly concocted for the UK bass scene. ‘Grotto’, however, sees blue turn in an otherworldly and euphoric direction. It’s another example of the Chinese producer’s freeform experimentalism, mashing up rattling Raster Noton style clicks and eerie processed woodwinds or strings that might feel at home on an Amnesia Scanner or Arca track.

‘Exorcism of a Self-Help Book’ is delicately assembled and has an unusual sound palette, with elongated anxious Björk-y tones and frequencies derived from a variety of effect riddled instruments. Throbbing bassline, intergalactic modular pings and a thudding 3-step kick recall the essence of the rave but the conforming kick never arrives. Assembled in orderly disarray its reminiscent of SVBKVLT’s nano-tech dancefloor and depth-charge bass music or Príncipe’s avant-garde approach to percussion and rhythm.

At what first listen sounded like an odd interlude, ‘Procession of Healers’ has just as much intensity and depth of timbre as preceding tracks. Frenetic chopped up trance synths and crystallised clicks n’ cuts in an alte-Schule Planet Mu or Mille Plateaux fragrance jostle with a mangle of breathy samples, water droplets and a furious hammering drum roll. The EPs end note is ‘Closed Open’, a playful loopy vocal harmony experiment acting as a sweet contrast to the synthesised fury of the opening track.

To coincide with the release Natalia Podgórska, a London based visual artist and to whom object blue is married, has created accompanying visuals for ‘Grotto’. Given this context, music and AV fused together as a live show, the tracks are easier to consume than as background music to your latest google hangout.

Despite the energy and sonics that may not exactly compliment laidback listening on a Sonntag morgen, ‘Grotto’ is another daring plunge into flexing the boundaries of experimental techno, and object blue has contributed a riotous EP to a blossoming sub-strata of the electronic music scene.

‘Grotto’ is scheduled for release 5 March via TT. Order a copy from Bandcamp.