Twenty years ago, American futurologist Ray Kurzweil predicted an “Age of Spiritual Machines” and a future where artificial intelligence develops consciousness and free will. Over the years, many of Kurzweil’s predictions have come true yet the jury is still out on whether we will create a spiritual being via computation.

On a rainy London evening, we find ourselves contemplating all this at The Roundhouse where Oneohtrix Point Never presents MYRIAD, a live show that spawned “Age Of” – an album themed as a conceptual operatic rendering of the dreams of advanced Ai’s yearning to return to the stupidity of being human.

It was fitting that the show was held at The Roundhouse – an impressive building from the Steam Age, when locomotives couldn’t reverse, so large iron turntable structures were built to facilitate the turning around, servicing and storing of the engines. We’ve certainly advanced since it was built 173 years ago.

Daniel Lopatin sat centre stage encompassed by an array of hardware including eccentricities such as the Daxophone, whilst Kelly Moran, Eli Keszler and Aaron David Ross respectively combine keyboards, percussion, and synths with effects and vocals.

There was something extraordinary about the music that followed. In places it genuinely sounded like music from the future trying to represent our current epoch. “Toys 2” has suspicious echoes of Celine Dion’s Titanic theme tune  – albeit bent out of shape and warped, as if an AI scanned all human audio output and pattern recognised it as representative. 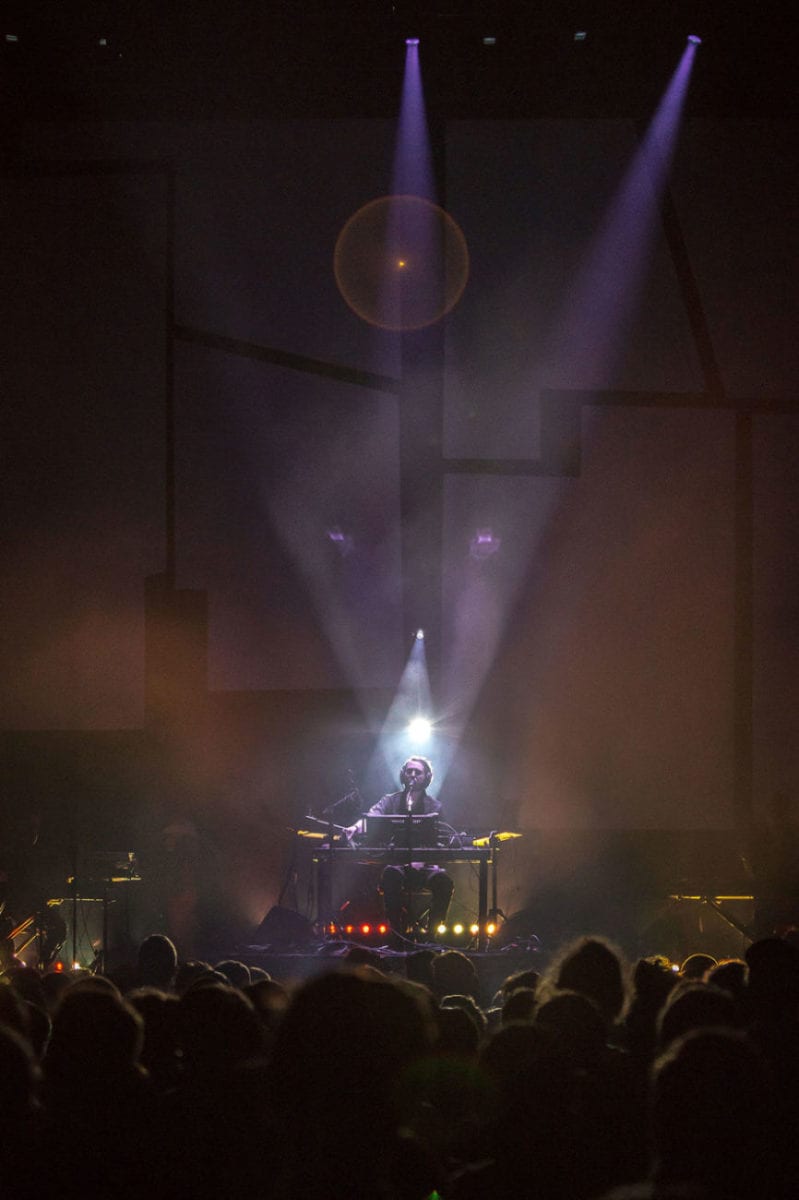 Indeed, it wouldn’t surprise me to find that “Age of” was composed by a futuristic artificial intelligence, feeding itself on numerous musical sources then machine learning a musical outcome – feverishly cycling through baroque harpsichord, folk, horror, psychedelic pop, auto tune R&B, black metal, hints of rave and glitched IDM manipulations.

In many ways perhaps this was the point – a cut and spliced regurgitation of our frenetic digital age, the insanity of humankind flashing before our eyes with the accompanying grotesque imagery of video artist Nate Boyce.

It’s no surprise that Lopatin himself is some kind of obsessive archivist – he has a degree in Library Science and Boyce has previously described him as “the most driven person I know. He basically never stops grinding, voraciously ingesting and indexing all facets of culture.”

At times it felt like these performers might be Ai’s themselves. Keszler’s percussion was unnervingly digital and precise whilst Moran’s handling of complex keyboard parts seemingly effortless and meticulous. Lopatin sang “Black Snow” and “Babylon” through auto tune software, adding to the alien feel of it all. He also never turned it off, lending his voice an otherworldly warble when he spoke to the audience and which sounded especially cracked with tears as he announced it was their last ever gig together.

Rather than robots from the future, the reality is that these are deeply talented musicians delivering a series of highly complex pieces of music flawlessly in the live environment. It feels like it will be a long time before Kurzweil and OPN see their “Ages of” come true and we get a spiritual artificial intelligence capable of making and playing music this good.

All photography by Neil Collins