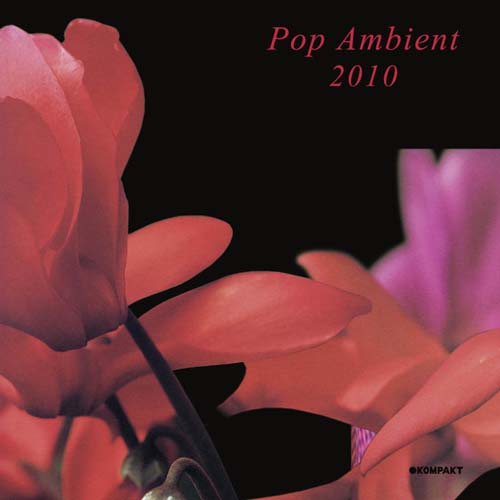 2010 marks the tenth instalment of the Pop Ambient series and before I get stuck into this review, this edition is by far one of the best I’ve heard from the series.

Since the series began 10 years ago it’s been responsible for introducing me to compositions of sound that are unlike anything else. You can describe it however you like but for me I don’t care about the genres it congregates, personally ambient techno just sounds rediculous. Nonetheless year after year each Pop Ambient compilation presents some of the finest ambient music out there, and there’s no doubt that Pop Ambient has become a cornerstone annual release for Kompakt.

The whole ideology of Pop Ambient was conceived by co-owner of Kompakt Records and producer Wolfgang Voigt otherwise known as Love Inc, M:I:5, Mint and Gas. If you want to find out his other aliases head over to his Discogs page. Year after year Voigt personally selects tracks for the compilation, no doubt to pay homage to his own sound projects, most notably his early 90’s project Gas.

The musical context often characterizes densely layered ambient soundscapes that are not concerned with beats, percussion or bass lines. Throughout Pop Ambient’s editions, the music has evolved ever so naturally, almost characterizing the blossoming of the floral arrangements that have graced the series covers year after year.

Over the years the series has been host to Kompakt’s keystone producers, Dettinger, DJ Koze, Wolfgang Voigt, Jurgen Paape, The Orb, Markus Guentner and Triola, the list is endless. This year’s track list is by no doubt a disappointment, most notably the presence of Dettinger. Olaf Dettinger hasn’t released new material on Kompakt since his stunning ‘Oasis’ album in 2000. God knows what he’s been up for the past 10 years, but this year he’s back with a shimmering song ‘Therefore’. According to Kompakt Dettinger will return so stay tuned.

For me there’s an incredible quality to each song on Pop Ambient, something extremely vast and wholesome to them. Jürgen Paape’s ‘864 M’ and Brock Van Wey ‘l You Know Where to Find Me’ are two utterly breathtaking songs. They’ve both become key tracks in my morning commute on London’s deafening Underground network. Trust me; ‘l You Know Where to Find Me’ is the perfect antidote in drowning out those screeches.

2010 also welcomes Brock Wan Wey to the Pop Ambient series. This man has become one of the most important ambient artists over the past few years. His ability to harmonize celestial vocals in ‘l You Know Where to Find Me’ has one of the most profound effects on any listener, instantly triggering emotions from any listener. As a result that primary concern that 17 minutes in length is just plain silly, in fact becomes totally obsolete.

DJ Koze flexes his Swahimi style production once again and as usual provides us with another weird and deranged track ‘Bodenweich’. It begins with a two-part bass stab and a voice manipulated to sound like a passing car before dissolving into quiet piano samples and violin. It’s easily one of my favourite tracks on the entire compilation and is another primary example of DJ Koze’s incredible production capabilities.

The tenth instalment of Pop Ambient is a great addition to anyone’s music library and musical knowledge. It’s extremely private music that you don’t really want to share with anyone else, it’s for you to enjoy during the coldest days of the year. Others may not appreciate it, but what do they know, it’s up to you.