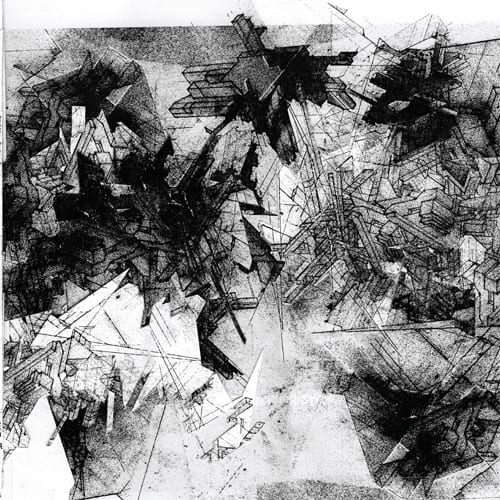 Former Vault Series associate Sawlin drops a solo piece of thick, grainy techno with his debut on Delsin. Techno Dumping is a four track journey through Berlin’s masked underground, with an intentionally enigmatic producer clawing at the helm. Not much is known of Sawlin – as the Vault Series website reflects: “What are letters, signs and words, when the records and the productions speak their own language?”

In the case of Techno Dumping, this language is dark, and swarming with interference. Its opening number, “Boring Feels” features a mechanical tide washing against a steady 4 X 4 thump. Much of the upper percussion is loosely filtered noise, while reclusive pads suggest a central key which is hinted at by swooping, metallic synths. It is a relatively calm intro to the release, a stroll through crackling noise.

The title track bursts through with slightly less subtlety, laced with dirty vocoder and toms that bound along with semi-eroded tribal urgency. At its best moments, the elements glide together and away with a soporific disinterest to one another. Elsewhere, the sounds appear to lack a certain warmth expected from a producer described as an “analog junkie.”

“Datamen Working” retains much of the dark atmosphere of its precursors, albeit with an intricately layered set of new mid-range elements, including synth lines that approach minor-key riffs, and snatches of fairly dry spoken male vocals. Moving from this point, “Neid Auf Vacuum” is easily the most melodic moment of the EP. Swarming interference remains around the occasionally staggering 4/4 kick, along with reverb soaked clicks and claps.

Overall, this is a strong release from a proponent of Berlin’s vibrant underground. Sawlin has stuck with his Vault Series ethos of ‘music before artist,’ also retaining to a large degree the collective’s interest in music that is “raw and industrial with heavy distortion and experimental soundscapes,” and it’s encouraging that Delsin’s profile will bring his sound to a wider audience.