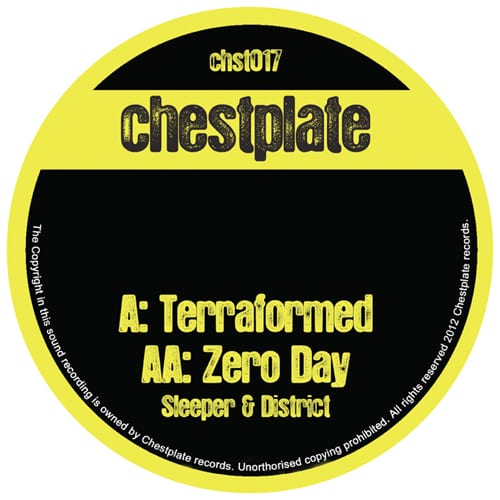 When Sleeper and District first caught our attention with a series of no nonsense, sub-low dubs and later a guest mix featuring on Distance’s Rinse FM show back at the start of 2011, suspicions were raised that the Chestplate Records imprint were on the lookout for fresh talent. With the label head and one of dubstep’s perennially consistent performers Distance having already added long-time friends and production peers Cyrus and Tunnidge to the roster, when it was announced the previously unheard of Sleeper and District would also be releasing on the seminal imprint it was met with much intrigue and interest.

Retrospectively, it was a move that has proved to be particularly fruitful for both the label and the two talented Coventry producers, with both District’s 3.5 Grams/ Haymaker plate and Sleeper’s Scanners/ Zombies release and countless other exclusives garnering support from everyone from Youngsta to Joe Nice. Their respective releases marked their arrival with aplomb, and helped continue to solidify Chestplate’s position as one of the more exciting driving forces within the 140bpm scene.

March brings us the much anticipated debut collaborative release between the two, and whilst both more than hold their own individually, it’s the combination of their powers that has yielded arguably the strongest effort yet, a typically unforgiving pair of beats featuring on the vinyl release and a couple more in the digital bundle. The A Side Terraformed is the strongest cut on the wax, and sees them switching up from halfstep rhythms and utilising a pounding four-by-four kick line to devastating effect. A heavily processed snarl dances on top wickedly and provides incisive detail to the faint murmured synths hollowly echoing in the backdrop to form an awesomely cagey and deep club demolisher. Zero Day occupies the flip, and is about as bleak as anything these guys have put together, conjuring churning swirls of menacing synth engineering and thunderous kick snare combinations emphasising the jolting pulse of the beat.

Colony and Transitions make up the digital bundle with the latter a real highlight of the release. Tranisitons, recently making an appearance on Rob Booth’s Electronic Explorations segment, is a slab of introspective and timeless sounding dubstep, evoking all sorts of brutally cold and rain-soaked imagery in the same way that many classics do, a ruminative piece of music built for night-time. The low frequencies on all four of these tracks are ridiculous, throat strangling bass in accordance with the physicality of the sound we have come to expect from the Chestplate label, and best appreciated on sound systems with appropriate frequency response.