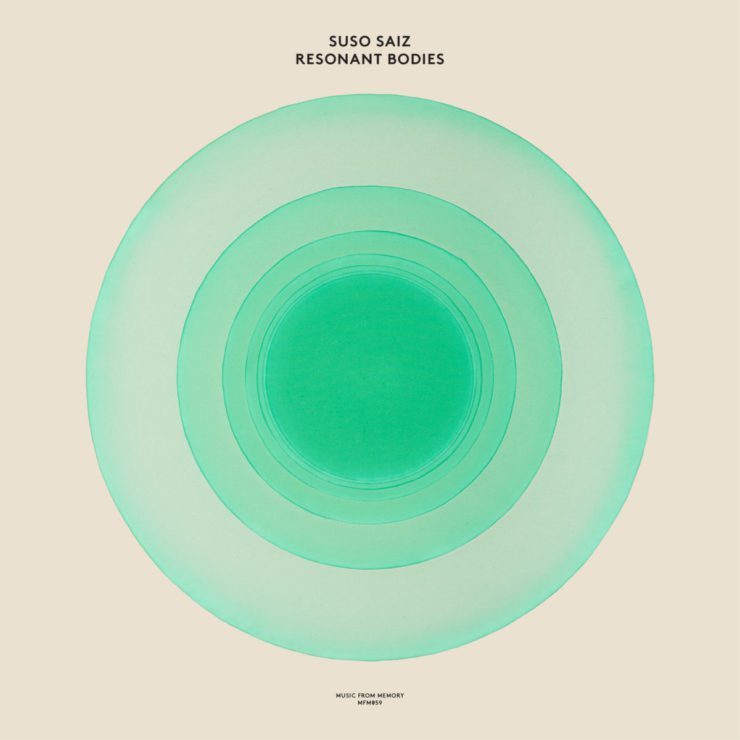 For someone who has been creating music for over 40 years, Suso Sáiz has done a great job at staying relevant. Known in his home country of Spain as a pioneer of ambient music and with a stellar reputation amongst his peers worldwide as collaborations with Steve Roach, Glen Velez and more saw this as a given.

Since 2017, he has become known outside of industry circles globally, thanks to his releases on seminal Dutch label, Music From Memory. Unerring fondness for building timbre upon timbre, he has built a reputation for creating simmering soundscapes and relaxing ambience. His seventh album ‘Resonant Bodies‘ sees him staying true to form.

The album opens gently with the somewhat comforting affirmation that nothing has changed from Sáiz. Onto the second track ‘Tarde de Agosto,’ panning drone sounds slightly ominous as it roves, sine wave-like across the aural landscape, searching and waiting before heading back into the depths for track three.

I’ll throw in a phrase that is used too often in ambient music but yes – ‘Sweet Instability‘ boasts *shimmering pads*. As an ambient pioneer I guess it’s okay to use a cliche on this, as Saiz was one of the first. A personal favourite is ‘El Espejo’ – arguably the most defined and melodic as the twinkling textures brush softly against the listener… I am ready to go to sleep.

On the B side ‘Brushed Thoughts’ paints a vast, windy soundscape as booming pads smooth out any rough edges, a fitting flow from the previous track. ‘Looking You in Silence’ – is this a typo? Anyhow, ‘looking at you in silence’ definitely fits the track well as a candid selection of timbre and thought.

‘Floating Into the Avalanche’ does what it says on the tin: an understated avalanche of all-encompassing, dissonant noise wraps its arms around you like a blanket before passing on, to…’Abrazo 2020’ and ‘Resonance Necklace’ are basically the same song pitched at different tones – was ‘Abrazo 2020’ the off-cut of ‘RN^’ we wonder, as both sound like unchanging Hakobune tracks.

Skip a few which pass by uneventfully – if this was any other genre than ambient then this would probably be a bad thing – and ‘Vertidos & Songs’ paints a wonderful picture of ambience. Through textures of field recording and melodies, the track shimmers into angelic tones to close off. ‘Purple Trains’ is the most dramatic of the album, with a multitude of textures; twanging pads come speeding down the centre of the track, passed by higher tones in the understated violin section before bowing down into a droney finish.

I once bought a compilation album of 87 tracks by Headphone Commute, every single one of them marked dark ambient. ‘When I Sleep’ can easily fit in here. The second track ‘Paseando el Encierro’ contains those sweet, twinkly tones for which I am always a sucker, like a Catherine Christer Hennix Marimba track, layered over a typical Suso Sáiz.

The finale ‘Outskirts’ is a strange choice to close the album, but telling: a sombre, somewhat melancholy close. Droning textures overlay droning textures, guitar pedals are prominent in sharing a rare glimpse of Sáiz’s process. We can almost see him lightly pressing the pedals.

For previous fans of Suso Sáiz, ‘Resonant Bodies’ is a continuation of a tried and tested formula. Nothing new but everything comforting and soothing. Maybe on his first album it was groundbreaking but by album number seven this newness is lost and just becomes a blanket of nostalgia – as aforementioned, not necessarily a bad thing. Just like a cup of tea – no matter how many you drink each day you’ll never get bored of that comforting drink. For fans of #ambient.

‘Resonant Bodies’ is out now via Music From Memory. Order a copy.

A1. Inside The Egg
A2. Tarde De Agosto 2019
A3. Sweet Instability
A4. Two Souls
A5. El Espejo
B1. Brushed Thoughts
B2. Looking You In Silence
B3. Floating Into The Avalanche
B4. Abrazo 2020
B5. Resonance Necklace
C1. Vertidos & Songs
C2. If I Close My Eyes
C3. Purple Trains
C4. When I Sleep
D1. Changes And Reality
D2. Watching Walk
D3. Paseando El Encierro
D4. Outskirts