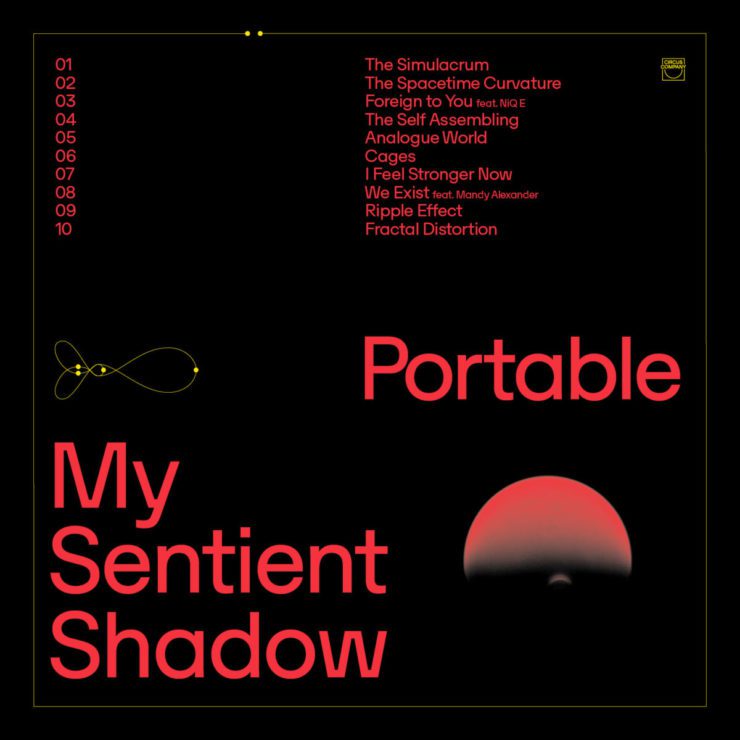 ‘My Sentient Shadow‘ marks Alan Abrahams latest long player as Portable, and his first for Circus Company. Over the years, Abrahams has had a presence on some of the most identifiable imprints associated with the explosion of turn of the millennium minimal house music that crossed into the mainstream – Perlon, Krause Musik, ~scape, Süd Electronic and Live At Robert Johnson. This was a time when scene had meandered into a cul-de-sac dearth of creativity and the fresh wave of intriguing ideas from Europe rang the death knell for the Global Underground prog-tribal jet set.

Where minimal eventually suffered the same fate, often ending up sounding like a couple of competing Atari playing Missile Command being flung around in a tumble dryer, Abraham’s work was always distinctive and evergreen. Just try it – put any of his work into a mix, record it, and your ears will always perk up when his strain of bittersweet house music weaves in.

There is a certain mood to his Portable project. The tracks have a hidden melancholy, like that incredibly British way of burying sadness deep inside to reply “yeah, not bad, you?” when casually asked “how are you feeling?” even when your day is feeling particularly cataclysmic.

Take the opener ‘The Simulacrum‘ as an example – the chords and melodies are right out of the smooth, jazzy house playbook. Yet there is a discordant nature to them, as if the fingers are Freudian slipping a single note in a major chord into minor. Of course there is also Abrahams’ distinctive vocal delivery at play here too, low and mournful, even when reciting the mantra on ‘I Feel Stronger Now‘, a tearful piano anthem for those who cry on the inside.

Being distinct is an incredibly potent tool in house music, where there are often some fairly rigidly defined lines in terms of structure and tone. ‘We Exist‘ is an acid house track run through the mechanism of madcap invention, perpetually chugging and grinding, peak basement material for when a crowd has been completely synchronised.

As a counterpoint to this, ‘Foreign To You‘ feels like the 303 has taken a diversion on the way home after the gig to guest as part of a lounge soul ensemble. Delicate acid arpeggios pair with crunchy analogue percussion – that occasionally has delusions of grandeur and has decides it wants to play scales – with the hushed vocals of NiQ E and accompanying pianissimo keys wandering around in the background.

‘My Sentient Shadow‘ weaves these threads like an angler looking to hook a fish. You’ll suddenly find yourself paused, perhaps caught on the rising swells that creep up in ‘Fractal Distortion‘ or the shadow echoes that appear in the right ear on ‘The Self Assembling‘. If you’ve somehow managed to miss the prolific Abrahams over the years, this is a superb point to jump in, his creativity and potency remaining undiminished.

‘My Sentient Shadow’ is out now via Circus Company. Order a copy from Bandcamp.

A1. The Simulacrum
A2. The Spacetime Curvature
A3. Foreign to You (feat. NiQ E)
B1. The Self Assembling
B2. Analogue World
B3. Cages
C1. I Feel Stronger Now
C2. We Exist (feat. Mandy Alexander)
D1. Ripple Effect
D2. Fractal Distortion