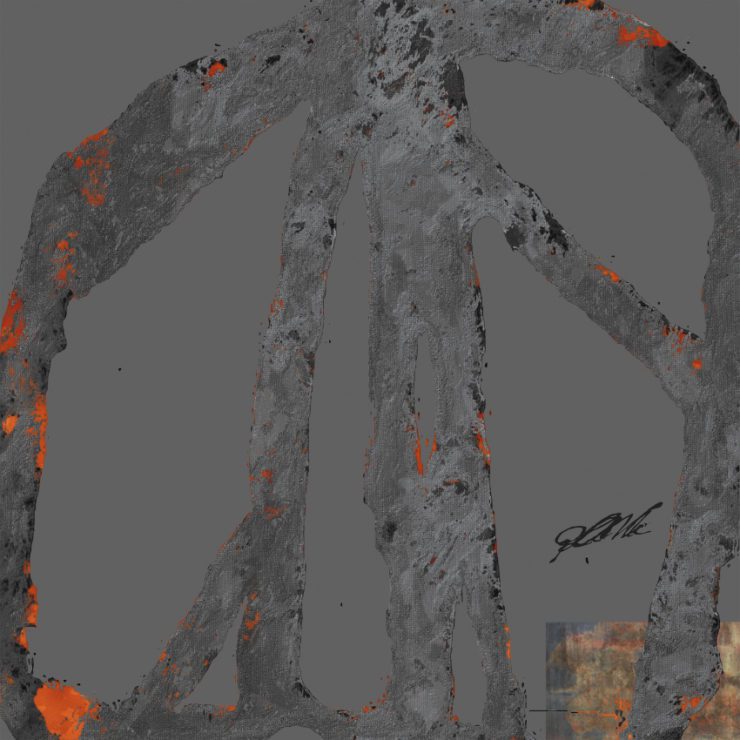 Outdoing your own ace card is something which every musician who enjoys the limelight has to confront. It’s a nasty game, when listeners are able to simultaneously demand more of the same as well as something inventive and new. When your former album — the frame of reference to your listeners — was one so ingrained into a collective mentality, the pressure is only stronger. Such is the position Huerco S is in with his latest album for Incienso, ‘Plonk‘.

It’s kind of hard to think of  ‘For Those Of You Who Have Never (And Also Those Who Have)‘ (hereon ‘FTOY…’ for brevity) by Brian Leeds (A.K.A Huerco S & Pendant) being anything other than the gateway drug for ambient music since its release in 2016 — popping up on YouTube recommended playlists, and shelved out in just about every record store on the planet, Leeds’ most popular effort tapped the collective vein at just the right time, and it continues to be a hugely relevant album in the genre.

Perhaps as a result of its popularity, there’s also a fair amount of lording over the successes on the album, and with it a certain gatekeeping of ambient music’s supposed principal offering: a generalised sound constructed from interestingly synthesised “aaahs” and “ooohs”, hearkening back to the genre’s birthplace as building a vision of a calmer world.

None of this dialogue comes from Leeds, whose work with developing the catalogue of West Mineral Ltd, and the profile of its artists, has placed the label teetering forever over the leading edge of the genre in a steady progression towards more extreme and interesting sounds — sounds which, as they reach further away from Eno’s cradle, appear more and more relevant or applicable to the modern “ambient” listener. In fact, despite ‘FTOY…‘ being heralded as an ambient album of the age, it defined itself most distinctly in moments of brittle sensitivity and anxious malaise, rather than the spiritual or soothing typecast.

Artists like Huerco, but perhaps even more so those populating the catalogue of 3XL and adjacent labels, such as the likes of Ben Bondy on his last West Mineral album ‘Glans Intercum‘, attack the notion that ‘ambient’ is exclusively for gentle moments, instead weaving in the fraught nature of modern living into their music. Combined with the proliferation of club/drug culture, it’s not surprising that we’re finding an increase in overlapping areas where hardcore breaks meet warming and gentle synth backdrops.

What could be driving this change in the ambient paradigm? Some answers feel reasonably natural – back in the 80’s the future was still glossed by elysian imaginings, an optimism which has receded with each passing year. Simultaneously, the world feels to have filled up and flattened out, thanks to globalisation and the era of wholesale connectivity, global themes that were imagined as boons to society before the eventual realisation kicked in.

Despite this, discourse around the subject of ambient music has, on the whole, remained 30 years in the past, with most producers carrying the banner unable to escape parallel comparison with the formative musicians who led to its rise. The very term “ambient music” itself has lost much meaning, signified in this review by its reference in inverted commas.

As the techniques and practices of the current forerunning artists distance themselves from the original pathfinders, still false-comparisons are all-too frequently made, references which serve to keep the discussion thoroughly stuck in a mire, such as this tone-deaf post from Pitchfork promoting a West Mineral article using a picture of Brian Eno for almost no discernible reason.

‘Plonk‘, then, just as with “FTOY…“, arrives at just the right time, showing the global music community how to look forward in this genre while still recognising its development from the self-same starting point that it began with. How? Both artistically and musically, ‘Plonk‘ showcases a more refined sound than any Huerco S album to date, a record that finds Huerco transcending the rather looming spectre of his own reputation.

Of these developments, perhaps the most pervasive is the introduction of space within the music. The principal chords of ‘FOTY…‘ were, on the whole, held down long in grand stretches of encompassing sound that spanned the spectral range and filled the ears with sound. From the get-go, ‘Plonk‘ conversely wields pregnant pauses with decisiveness and tact.

‘Plonk II‘ demonstrates the point: scarcely rising above the high-water mark of the first phrase, the track lingers long in empty realms, the gaps between notes scraping out a sound that is both full and embodied, and also transient and complex to predict. ‘II”s sister, ‘Plonk III‘, takes this lesson and runs with it, furnishing itself with moments further nimble articulation and stuttering electronics, all while still riding the same wave.

At this point it feels pertinent to describe one significant element of Leeds’ musical refinement mentioned earlier, namely the development of a compositional narrative: scrambling through the weed fog of ‘FOTY…‘, and then through the cavernous, omnidirectional mists of his Pendant album of last year (‘To All Sides They Stretch Out Their Hands‘), Plonk sees Leeds direct himself much more intentionally, using the innate components of each track to develop a clear curve across the album.

‘IV‘ flickers out with pointilist minimal break energy, using a foregrounded melody with passing reminiscence to older grime synth leads, the likes of which is almost entirely absent from his prior releases. Although ‘V‘ might be considered by the cynical the “interlude throwaway” track of the album, it also marks a watershed moment in the album, reflected also in ‘VI”s eddying ripples that remind a listener of more familiar turf.

However, as much as these tracks carry more than their fair share of similarities to older Huerco, it’s also a feint: the final three tracks of the album include some of Huerco’s best ever music, and earn that title by dint of being his most original, most distant from the past.

‘VII‘ sees Huerco wielding ambient music like the weaponry heard on West Mineral’s trailblazing repertoire, liquid rhythms streaming by in half- and -double-time at once, slotting this track much closer to slowly building rave music than a Rothko-esque wall of sound to get lost in, but in its restraint still undeniably part of whatever ‘ambient music’ refers to.

In some ways, ‘Plonk‘ as a whole feels like a warm-up for its penultimate manoeuvre, ‘Plonk IX‘. In Leeds’ first released track featuring vocal talents SIR E.U’s piecemeal exploration of a stoned mindset, and its bondedness to the illogical pace of the instrumental, is a definitive highlight of Leeds’ entire repertoire.

The fact that this track reflects Leeds’ avoidance of the circling ‘ambient’ vultures only makes more stark the developments in his production since we last heard a new Huerco S album. Here we find an artist looking to escape the rumour of his own shadow by stepping away from the light. In standalone phrases that combine towards some kind of uncertain optimistic outlook, the pair deliver an ingenious blend in a “contextually ambigious” flow-of-consciousness style that certainly wears the album’s crown.

Although ‘IX’ leads into the peak-ambience closure of ‘X‘ — a track that alone satisfies the yearning for the phased states of ‘FOTY…‘ — it is the more experimental development of ‘IX‘ that really makes this album worth the listen.

On ‘Plonk‘, Huerco S achieves many things — a return to crystal clear form, a new path forged, and a new spell cast, all while staging itself as an affront to the contemporary ‘muzak’ being disseminated under the ambient title. The often contradictory nature of these merits (including the sometimes tangible struggle in the juggling of the older and the new) might see division amongst his fanbase, but in chief Huerco’s victories outweigh the faults.

Of all the achievements the one which stands up the most is his challenge to the listenership of ‘ambient’ music, and also the very definition of the term. For years West Mineral has been mining this particular vein, and now Huerco S adds his own chapter to a book that sees a genre develop from “ignorable” music to something far more culturally significant, a genre of music that sees itself traced by every other with increasing rapidity.

‘Plonk‘ perhaps doesn’t push at this boundary as much as it could, or as much as Leeds’ contemporaries do, and that’s also fine. You don’t have to do much reading of interviews with Huerco S to realise that he doesn’t give much of a fuck about the commercial success of this album, or about how listenable it is deemed by press or fans alike. ‘Plonk‘ is as much a therapy record to its maker as it is for the open-minded. Just remember this: that therapy is rarely an entirely peaceful process.

‘Plonk’ is out now via Incienso. Order a copy on Bandcamp.