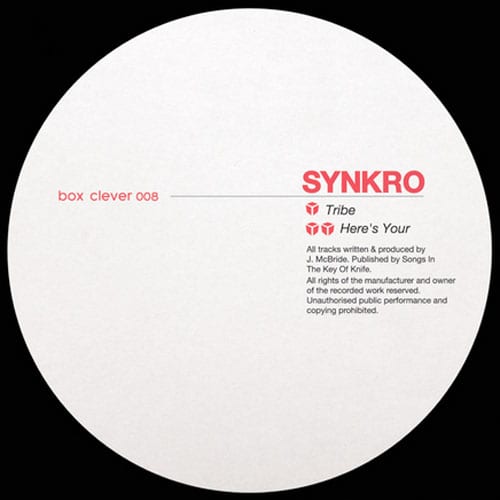 For those in the know, Synkro AKA Joe McBride has always been a guy. Whether engorged in rainy, left-leaning garage, deep halfsteppers or drum and bass, he’s worked quietly and fervently over several years to reach where he’s at.

Initially cutting his teeth on Smokin’ Sessions, he’s long moved on from the Burial worship of 2008 and progressed in leaps and bounds. Recent times have seen him rise to wider prominence, as productions on Mindset, Box Clever, and Exit Records have all dropped to solid fanfare.  His relationship with the dBridge hasn’t hurt either.

After providing Box Clever’s innaugural release, ‘Reservoir’/’Just Say’, last year, ‘Tribe’/’Here’s Your’ marks the label’s eighth installment. It’s a percussive bout that straddles the line between the damp and the colourful; showcasing Synkro’s versatility on both sides of the equation.

‘Tribes’ jitters over a low-reaching bassline and otherworldly aesthetics, swiftly veering into several percussive nooks and crannies. It’s rhythmic chatter is tidy and hypnotising, and melds well with its mystical vibe.

However, the pick of the two is ‘Here’s Your’. Coming off as a giddy companion to the recent works of Arkist and Kahn, it works through a busy yet accessible garage mantra. Dabs of arpeggiated watercolour fills in a wide organ dynamic, as crispy hats and snares shuffle in classic Synkro style. Synkro’s well-known ability to splice R&B syllabics into vibrant melody is also continued here, as this lover’s riddim sways from side to side.  A very pretty cut, indeed.

Another nod to Synkro and Box Clever for this one.