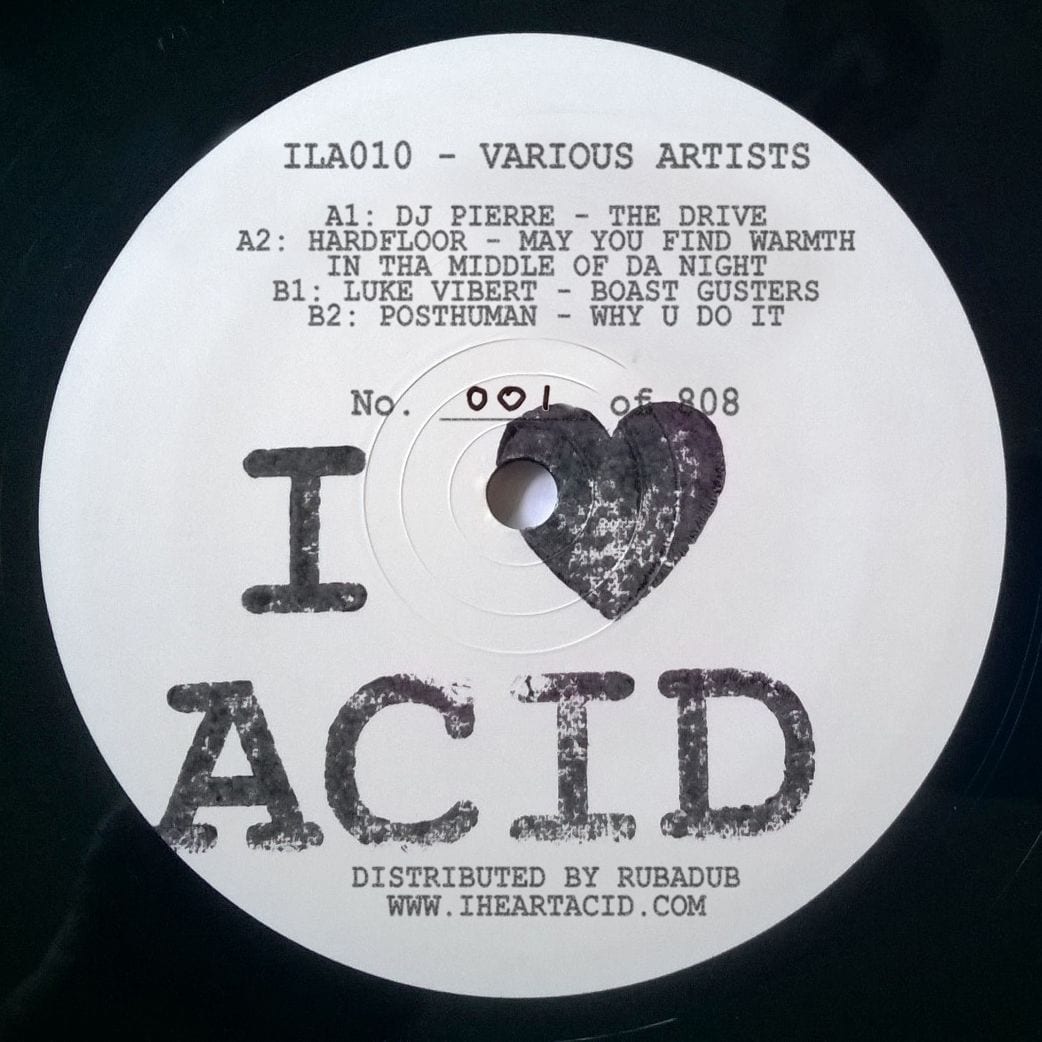 2015 was pure fire for Posthuman. When not DJing underneath a scale replica of an X-Wing Fighter for Secret Cinema’s Star Wars afterparties, the I Love Acid imprint really kicked into gear. Named after their series of parties, it is a love letter to all things acid. Those invited into the fold read like a who’s who of expert 303 manipulators; Luke Vibert, Global Goon, Perseus Traxx and DMX Krew to mention but a few.

The tenth release is a bit of a blowout; a various artists EP with Luke Vibert returning, acid pioneer DJ Pierre, career acid experts Hardfloor and curators Posthuman making up the contents. Across the four there is a distinct stamp to each track and it’s a testament to the surprising versatility of Roland’s little box of tricks.

Luke Vibert brings a suite of various Roland boxes to the table in his usual playful style on ‘Boast Gusters‘ and it is tangibly hardware in its execution. It skittishly skips between patterns as you mentally work the controls in tandem with Vibert; cutting the beats, working the resonance and suddenly stepping into swing time. Phuture303 man DJ Pierre goes wild pitch on his aptly named ‘The Drive‘. The airy 606 tones of Vibert’s effort are swapped for a meaty thunk of a kick which lets a simple a simple 303 sequence wander through pitches and resonance.

The key to Hardfloor’s success has always been in the careful release of their 303 elements. Progressive rather than tweak happy, a pattern gets a lengthy workout before adding in another complimentary layer of acid to continue building momentum. In some ways ‘May You Find Warmth In Da Middle Of The Night‘ is the early evening and groovier sibling to their legendary Blue Monday rework, building with their signature portamento flourishes but going for maintained energy rather than a dramatic euphoric peak time drop.

Rounding things off, Posthuman showcase how they give the 303 punky snarl on ‘Why U Do It’. It’s fat, dominates the frequencies and frequently grows into a menacing snarl. Some simple chord drops release the tension, preparing you for another savaging at the teeth of the pit-bull.

Some might question the legs of running with a pure acid theme. Swap over to the I Love Acid Facebook page and you’ll find 1,885 (at the time of writing and counting) examples as to why that misconception can be utterly blown away. With previous entries easily selling out their appropriate quantity of 808 copies, this isn’t so much a place to jump in to get acquainted, more a place to get on before you are left behind completely.