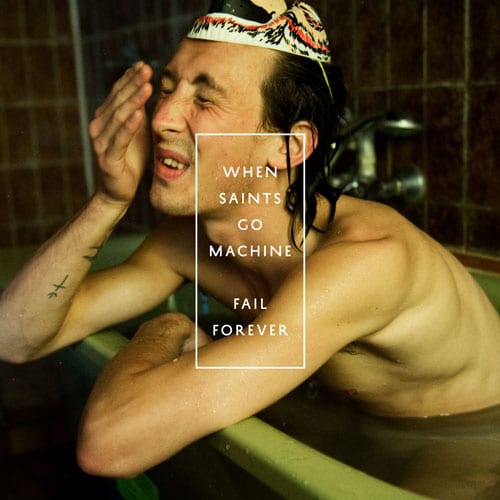 If you were at last years Rockslide Festival you might have witnessed Denmark’s latest premium export ‘When Saints Go Machine’. If you didn’t, don’t worry about it because they have an exceptional five track CD on !K7 for you to wrap your ears around.

‘When Saints Go Machine’ is made up of four band members, Silas Moldenhawer on drums, Jonas Kenton on synth and vocals, Simon Muschinsky on keys and Nikolaj Manuel Vonsild who’s voice has a close resemblance to Anthony Hegarty singer from Anthony and the Johnsons.

They’ve known each other since childhood, thanks to their parents living near Copenhagen. Together they formed the band in 2007 with the aim to make music that would work in club environments. They eventually got bored producing the whole four on the floor sound, so they decided to focus their efforts on electronic pop that would eventually transcend their music from the borders of Denmark.

The Berlin based record label !K7 is principally known for releasing electronic dance music and bass music. In 2010 they released an array of music from some of the industries heavyweights such as Cobblestone Jazz, James Holden, Jimmy Edgar, Kode 9, Brackles and Apparat.

As the label approached the end of the year they released ‘You Make Me Real’ by ‘Brandt Brauer Frick’ aka the German trio behind one of my favorite music videos of 2010 ‘Bop’. It appears that the label is branching out from the confines of electronic dance, with the intention to push new sounds and pioneering bands. Some critics have commented that this strategy is similar to what Warp Records did in 2005 when they added Maximo Park to their respected roster, except for in this case !K7 have selected a far more superior band who offer so much more than the latter.

The first track ‘Fail Forever’ is an avant-garde pop gem worthy of note. It’s a fast moving multi-layered song fusing exquisite lyrics with a gorgeous backdrop of somber cellos. Throughout the song Nikolaj demonstrates how flexible his voice can be, as he effortlessly fluctuates from highs to lows.

Nikolaj is responsible for the bands lyrics and melodies. He says ‘Fail Forever’ is about how people never say what they think. “When you meet someone and they say, ‘How are you doing?’, you always say, ‘I’m fine.’ It’s never OK to say, I’m depressed. But the most human thing is failure. Everyone pretends to be superhuman, but they’re not.”

Behind every great lyric there is meaning and in most cases it’s due to personal experiences. Despite his efforts in hiding his emotions, they clearly come out in their songs. ‘Pinned’ expresses one of his life experiences with utmost efficacy. The song is about his father’s instance whilst he was in hospital. He says ‘It’s about lying in a hospital with tubes coming out of your body, like you’re pinned there.” It’s heart wrenching, yet beautiful too.

‘You or the Gang’ is the bands most dramatic and ethereal song. It begins with an organ; similar to the type you’d hear at the circus, and bounces along until you find yourself enthralled within a crescendo of violins, synths and ethereal vocals. This has to be my favorite song on the CD.

Overall ‘Fail Forever’ is an excellent example of this bands potential. I am adamant that their popularity will grow from strength to strength throughout 2011 and I hope to see them perform throughout Europe this summer.Finally they plan to release a full album later in the year. Until then, you’ll just have to make do.