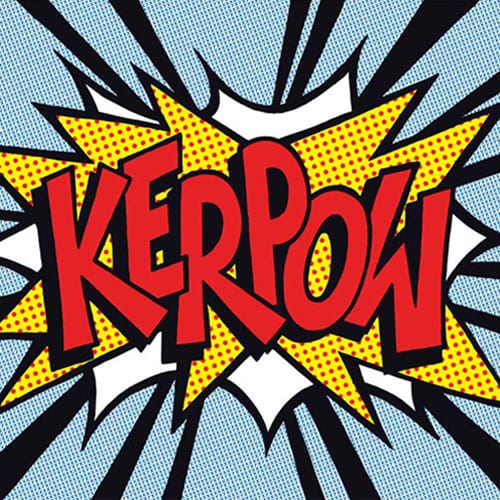 Out of the dark crevices previously inhabited by dubstep, genres such as footwork, garage, 2-step and bass are gaining reborn dancefloor momentum and notoriety as swiftly as they are acquiring press coverage. As such, there’s been many a producer all too eager to hop on the bandwagon, saturating the market with sterile and predictable bass music. One of the scene’s frontrunners, clearly not guilty of this, is a certain XXXY.

Restraint is not a word that appears to exist in this Manchester based producer’s vocabulary. Tracks such as ‘Ordinary Things’ and ‘Open Your Eyes’ are fantastically bombastic demonstrations of funky house with a generous helping of hard bass that keeps them chugging along. It is credit to XXXY that he has moulded such a recognisable and wheaty niche for himself amongst all the bass chaff; a breathless, no holes barred sonic exploration of various BPMs with a wit and joy reflected throughout.

His latest twelve inch, ‘Kerpow/ Down Wit U’ rather fittingly arrives with pop art as its artwork. Looking closely you can see the similarities that Lichtenstein and XXXY both share; a tongue-in-cheek approach to their work, deliberate amplification while retaining a soul deep beneath the layers of embellishment. Yet while the pop art movement may have been parodying earlier art forms, XXXY’s homage to jungle and techno here is emphasised more with a sense of sincerity and respect.

Title track ‘Kerpow’ bleeds soulful spirituality, if only from the fragmented vocal looped throughout. While dense, the soft synths that emerge through the cracks in sound is one of XXY’s most characteristic and laudable stylistic touches. The clapping beats, the short breaks before leaping back into the bouncy bass-laden heart; this may all seem contrived coming from another producer, but XXXY somehow makes it work.  ‘Down Wit U’ features all of the signature XXXY sounds, gradual looped build ups before breaking into a bass-heavy, propulsive mix of beats and snares. In his traditional style, this insistently uplifting mélange does not let up and throbs for another four minutes. Overpowering.

While perhaps not as catchy as his previous tracks, ‘Kerpow’ and ‘Down Wit U’ can be counted as solid additions to XXXY’s growing back catalogue. He hasn’t re-invented the wheel with this twelve inch by any means – his sound is evolving and becoming more defined though, proving once again that he is worth catching. High praise in itself.