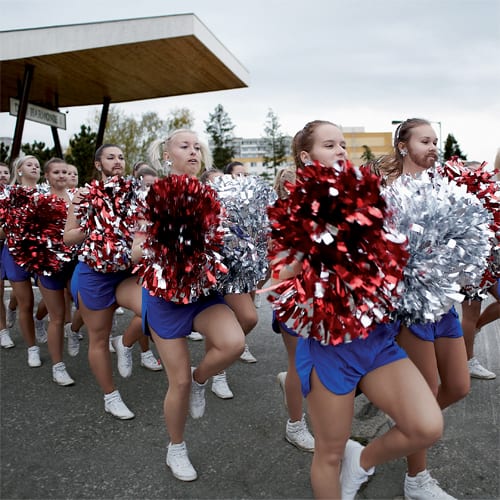 Under the irreverent gaze of two bearded lady cheerleaders, Sonar threw open its doors this June for the 20th time. It was a landmark year for Barcelona’s esteemed International Festival of Advanced Music and Multimedia Art, and pressure had been mounting for its preceding weeks and months, for various reasons; the unforgivable presence of EDM big-wigs in its line up, an heretic venue change… IA was there (in spite of what genuinely seemed like a conspiracy against electronic music led by French air traffic controllers…) for the full vicentennial Sonar experience, to hear music, explore technological offerings, and ask: at this symbolic juncture, is the oft-disputed jewel of electronic music still balanced, however precariously, on the cutting edge?

Caveat: Normally at IA we go to reasonable lengths to avoid the use of the first person, in an effort to support whatever objectivity is possible when commenting on music. But get this straight folks: Sonar is BIG. We couldn’t be everywhere at once. So, things were missed, hangovers may have tainted the earlier portions of the festival days, and the opinions below obviously don’t speak for each of the 121,000 people from 102 countries that got a bit too much sun while having a bit too much fun. So, with that in mind, here’s our take on Sonar 20.

The first challenge faced by the event was a pretty fundamental one: its location. Moving Sonar by Day from Barcelona’s Centre of Contemporary Culture (CCCB), its Museum of Contemporary Art (MACBA), and the surrounding grounds in En Ravel, to Fira Montjuic in Placa d’Espanya. While many of Sonar’s previous and repeating visitors seemed nonplussed at this choice, we were pleased with the new venue. It might, arguably, have lacked the cultural history and character of El Ravel, Fira Montjuic was a well conceived astroturf oasis that was pretty entrancing, if one could avoid the site’s occasional resemblance to a shopping centre. Sonar has never been too concerned with sentimentality or nostalgia, though, and most of the venue-related complaints we heard were suspended in one or both. Sonar by Day ‘redux’, while now resembling something more like a ‘traditional’ festival, was more spacious than ever before, amply accommodating the huge volume of daily visitors, and still leaving space at the bar.

The sound quality suffered little issue, aside from the occasional interception of audio limiters outside in SonarVillage; but enveloped in the cavernous darkness of SonarHall, the sensation wasn’t far from being in one of Europe’s foremost clubs. This couldn’t necessarily be said of the RBMA-curated SonarDome, which drew unfortunate comparisons to an enormous concrete alcove; it somehow couldn’t quite support the atmosphere of Red Bull’s previous efforts. Online listeners (who tuned in to the live stream on RBMA Radio) wouldn’t have been concerned with this, though, and the programme had its intrigue.

Perhaps as a favourable response to the venue, and its stages, our personal Sonar by Day highlights were all elevated in part by their individual placements within Fira Montjuic. Anenon, who played early on Friday afternoon to a fairly sparse crowd sat in reverie (or recovery) on SonarDome’s artificical turf, treated prudent RBMA radio listeners as well to detailed electronica, with the occasional flare of ambience; by contrast, the same space seemed to grow impatient even in the face of predictability, as JJ Doom were a calm half hour late. I admit I didn’t stick around too long after the masked duo’s arrival, so I may be disputed on this, but SonarDome somehow seemed ill-equipped to carry the Villain and Janerio Janel in all their infamy…

SonarVillage catered well to the sun-drenched outdoor arena of Sonar by Day, with a very well-received Thursday closing set from Lindstrom and Todd Terje; the next day, Barcelona’s own BeGun offered smooth, ethereal hip-hop, with elements of softened trap – their visuals were entrancing, a melody of saturated pastel-palette abstractions, with VHS video-nasty interludes occasionally invaded by comparably harsh geometric forms. Warp Records’ Jamie Lidell was electric, with his deep beat serenade infecting a near-capacity outdoor crowd. Lidell followed Matthew Herbert, who in spite of his masterfully precise techno set, somehow felt jarringly out of place in the sun.

An overall highlight for Sonar by Day was Jackson and his Computer Band, who debuted his futuristic, flamboyant, and frankly gripping new live show in SonarHall on Saturday. Moving eccentrically in a grey boiler suit, and periodically lifting a disembodied chrome forearm (what was that thing? It can’t have been just a crowd-pleaser? Is it some kind of controller?), the Parisian thundered through cuts from his 2005 Warp debut ‘Smash’, and tested tracks from his forthcoming sophomore, ‘Glow’, also on the cult British label. He was followed by a compelling set from Warp cohorts Darkstar, as well as the brutalist cerebral techno of Vatican Shadow, who signed off on Sonar by Day’s first tenancy in Fira Montjuic.

Read Sonar 2013: Part 2 focussing on our take on Sonar+D, Sonar by Night, and the festival’s coming prospects.