The subject of royalties for electronic music artists has been an increasingly hot topic of recent. The main thread has been spurred on by the Spotify’s heavy investment in non-music related activities – such as military AI and celebrity podcasters – at the detriment to artists – who are often racking up hundreds of hours of playtime for very little return.

Although there is a much bigger picture, one of how the cut of a $7 billion industry is not being reflected in a majority of artists, whose work is devalued into a marketing tool in the hope of gaining mindshare for the more lucrative touring schedules, an activity seriously curtailed since the advent of the global pandemic.

However, there are other avenues for artists to earn money in a relatively unexploited fashion. Entities like the Performing Rights Organisation (PRO) and the UK’s PRS have pools of money specifically set aside for digital, broadcast and public performance. However, there is a gap between artist and payment which is twofold.

First is an issue of awareness. Artists are not often aware of these organisations and the benefit of registering with them. This is partially due to the lowering of barriers to the market that the web brought to digital music. Traditionally the process of dealing with savvy labels – both indie and major – meant that those presented with the opportunity of breaking through were very well schooled in the nature of contracts, licensing, and royalties. This learning is now lost with the barrier to market being so low that artists and labels can hit the market with relatively little industry knowledge.

Second is that the process is frictional. Currently, PRS and PRO submissions require artists to manually handwrite and submit playlists of the music they have been spinning – something that is possibly not the first thing on a DJ’s mind at 4am after a 3 hour stint at the controls. It is a frictional process in a frictionless world. While we do have an initiative for music recognition software being present in the venues and festivals, in reality it is something that has only had a light take up outside of big the bigger names in the scene, and something the artistic community has relatively little agency over.

Looking to disrupt the market, Zak Khutoretsky – aka DVS1 – is launching a low friction tech solution named Aslice, a company he founded in 2020, with the platform currently in public beta. As a long standing veteran of the scene, he is a respected name to have fronting the solution and, to add weight to the company, he also recruited Ethan Holben, former Head of Red Bull Radio and Vice President of the global music community fostering agency Yadastar, to act as CEO. 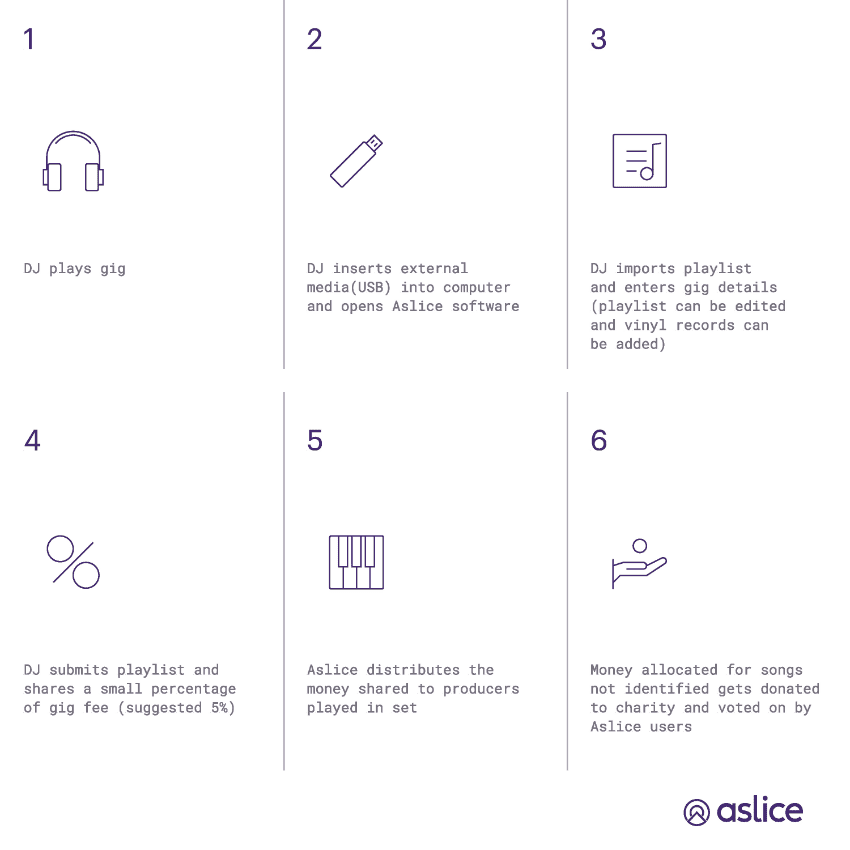 Aslice’s approach is to take inspiration from to the foundations of dance music – the scenes and the communities – and extrapolating spirit that across the modern connected world. The concept is simple – a DJ takes a fee for a performance, the DJ then splits a cut evenly between the artists whose music was played.

NFT’s and other smart contract based technologies have made a play for the community run principle, but web3 has so far introduced layers of friction. Opaque entry points to the technology are caused through nests of convoluted platform rules and token economic models that are mandatory learnings. Also, the insecure nature of the currencies that are also at perpetual risk of devaluation through someone offhandedly shitposting on social media hardly inspire confidence in the solution.

On the flip, Aslice keeps it simple – import your gig details and playlist directly into the software, correct any idiosyncrasies and add in vinyl tracks, set a fee and then Aslice handles the submission and artist payments with any unallocated funds being donated to charity. Most importantly, the platform will use machine learning to scan public databases to assist with metadata matching, plus will also allow for allocation of promo and pre-release materials to ensure completeness. That means less work for the DJ and the  software bearing the brunt of securing maximum amount of effort in securing the funds for the artists.

Rather than leave the experience right there as a raw metadata submission platform, Aslice has ambitions of becoming a community platform, where the “ID?” crowd can follow DJs, products, clubs and cities to find out what’s being played, by who, and where, with the option to then click to purchase. Producers can also see the impact of their track as it spreads out to venues worldwide. It is a joined up process from artist to DJ to fan, all working together for mutual benefit, distancing the scene from the corporate treadmill towards more of a “we’re all in it together” mindset. Plus, if you are the enterprising combination DJ/Producer type, there is a wonderful circular rhythm of giving and receiving with Aslice.

The private beta showed encouraging statistics: 110 playlists uploaded between 50 working DJs between November 2021 and March 2022, bringing in an average of around $61 per playlist. The upshot of this was a total 5291 matched tracks earning an average of $1.40 per track, but often individual tracks earnt $10 or $20. It is evident the platform can give a fair slice of the pie for the hard working artists worldwide whose music the scene is built upon.