Tim Hecker has been sculpting sounds to give birth to some of the most important compositions of this century. After being enchanted by Apex Twin’s ‘Selected Ambient Works 82-95’ during his teenage years, he dropped his rock band project and started to produce techno under the name Jetone. He then turned his attention to ambient and glitch music, entering that aerial and nocturnal world to eventually become one of its leading pioneers.

A master in blending sounds from diverse backgrounds and playing organs in churches. His 2001 album ‘Ravedeath, 1972‘, is arguably one of his most famous celebrated albums, which was recorded with Ben Frost in Iceland; Tim Hecker often brought the public to tears, his music being described as spiritual. 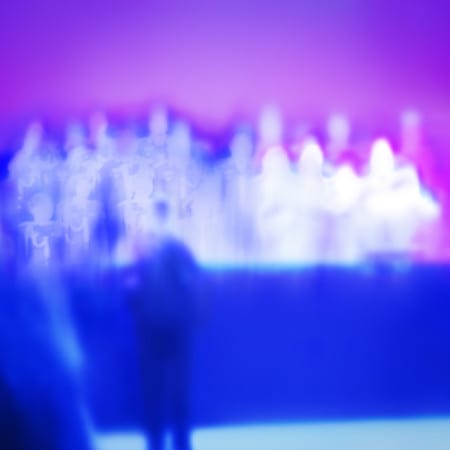 ‘Love Streams’ brings its listener deeper into melancholic lands than his previous album ‘Virgin’, recorded in 2013, which saw Tim Hecker working with live players for the first time. Inspired by 15th century choirs especially the ones by Josquin Desprez, considered one of the most iconic composers of the French-Flemish Renaissance, he turned this to an “artificial intelligence-era language of digital resonance”, succeeding once again in forwarding our ancestors’ sounds legacy.

Calling it “a riff on the ubiquity and nihilism of streaming of all forms of life”, the album was recorded between 2014 and 2015 in Iceland where both ‘Virgins’ and ‘Ravedeath 1972’ came to life and its release will be supported by a world tour, starting in Los Angeles on 7th April, with dates in London, New York, Krems and Durham.

Discover more about Tim Hecker and 4AD on Inverted Audio.