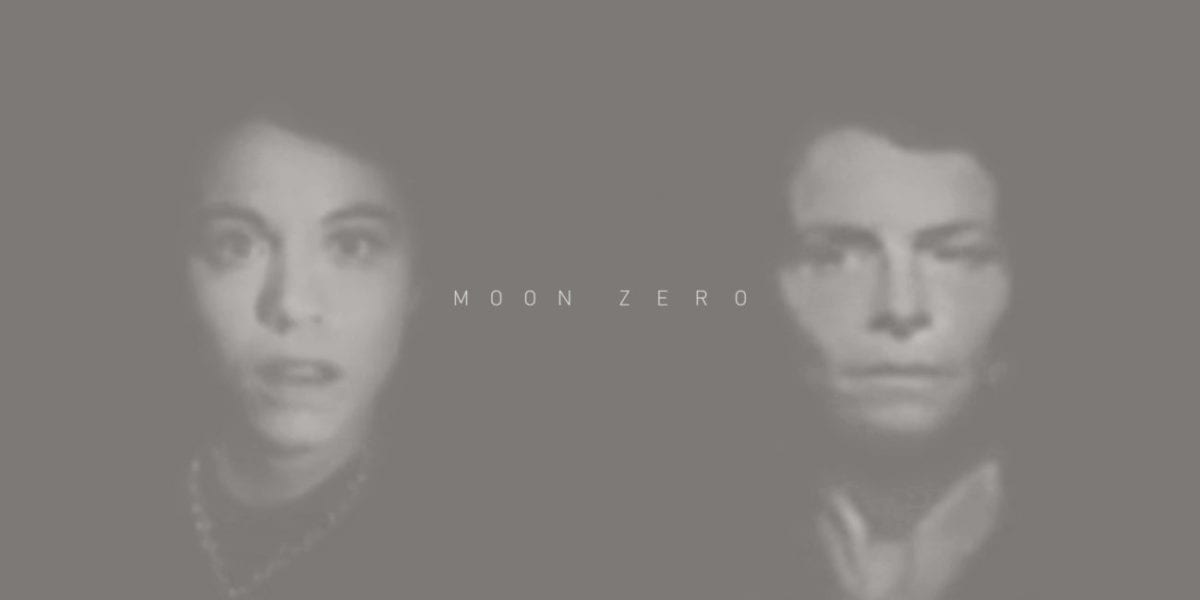 Following the release of his latest ‘Loss’ EP, London-based Tim Garratt premieres the video for lead track ‘Lara Witchcraft‘ from his Moon Zero project. Both haunting and compelling, the compositions are unique in their symbiotic relationship with churches, the environments of their inception. Inverted Audio asked Garratt about sonic experimentation, the significance of acoustics and the trade-off between the conceptual and the pragmatic in his creative process.

How did you get to the kind of music that you make today from that starting point?

I moved to London a few years later and fell into producing electronic music on a laptop alongside playing guitar and drums in rock bands. But I’ve always felt more at home with an instrument and could never get on with using a computer to compose. Everything seemed to come out a bit lifeless. So it was only when I began using primarily ‘hands on’, analogue equipment and guitar pedals that things started to make sense. Moon Zero came about as a sort of antithesis to the overly traditional arrangements and sound palette of a lot of music I was making at the time.

Do you think there is a freedom in the framework of ‘beatless’ music in comparison to its alternative?

In some ways yes. For me, the idea of ‘beatless’ music provides more scope for movement sonically and structurally. My experience of using beats in my music is that the loops become too rigid and I lose a sense of spontaneity. But the biggest draw to ‘beatless’ music is that it forces me to work harder to make the soundscape engaging. I still use rhythm in my music, just it sounds like an organ pulsing rather than a kick drum. So you get the propulsion, but sonically it moves as one with the drone rather than fighting it. Drum sounds are distracting to the ear and demand too much attention on an individual basis.

Your music seems intricately linked to its environment. Could you tell us more about how and why this is?

It’s mainly about capturing an atmosphere. Before I wrote the Tombs EP I spent some time in Turkey and throughout the day there would be these huge calls to prayer blasting out of cranky speakers and resonating around the hills and in the town. The combination of the heat and this sound struck something overwhelmingly physical in me and I knew I wanted to try to recreate this feeling in my music. The first track on Tombs, Dalyan, is based around a field recording from my trip out there.

It’s also to do with the idea popularised by people like John Cage that the environment is as important as the musical instruments, so I like to record in spaces that aren’t sterile. In the EPs you can hear children playing outside, wind blowing through gaps. Some bass frequencies would cause parts of the church to vibrate wildly, becoming an instrument in its own right. I’m attracted to the life it gives to the music.

Is the decision to conduct your compositions in churches primarily a pragmatic or a conceptual one?

Mainly conceptual I think, although in reality a bit of both. By recording alone in a large reverberant room for hours on end there is a sense of isolation that creeps in. I’m attracted to the grandeur of religious iconography, but coupled with my atheist outlook I feel in an alien, uneasy situation. So in this way the setting is directly influencing the composition.

The idea of using the church acoustics to add richness to a drone isn’t a new one, but it is an important aspect of my sound. I record in churches for this character; the authentic space and depth, the harmonic chaos of competing frequencies bouncing around the room. It also adds as a sort of finaliser to the composition. It’s quite easy to get lost in a sea of experimentation but by recording live and on location it pins the composition down to a time and place.

What was the physical process like for the realisation of the EP?

Both EPs were recorded at St George in The East church in Shadwell, East London, around about a year apart from each other. Basically I transferred my studio to the church and took it over for a couple of days. I had a PA setup at one end and my live rig at the other and recorded the room. The instrumentation was drawbar organ, bass synth, vocals, fx processors and guitar pedals. Edgar Smith played double bass on Lara Witchcraft. Apart from the occasional church tour I was left to my own devices, it’s quite interesting to me the idea of these grand buildings that sit there empty for most of the time. ‘Loss’ was recorded on the day of the St Jude storm last year. Although it didn’t really hit London at its fullest I remember there being this palpable tension in the air.

How well do you think your music can translate to a live setting and performance?

It’s been something that I’ve been working on a fair bit recently, I’ve been inspired by photos of bands like Cluster who had loads of gear on stage and were working live. I like the idea of a live performance containing an element of risk, so for this reason I steer clear of pre-recorded samples and laptops. It makes things more interesting to me as an artist but also to the audience I hope. I use a lot of improvisation within set parameters which means that each show has a uniqueness to it. The part that interests me most with live performance though is the ability to present the music in a very physical way with the added volume and bass response.

What kind of emotions do you think the EP conveys?

The main themes are a sense of dimming nostalgia, old memories and the inevitability of decay. Whereas ‘Tombs’ was meant more of an opaque relic, in an attempt to humanise the music of the follow-up I decided to lay it on quite thick with the emotional imagery, hence the title ‘Loss’. But the good thing about instrumental music is the lack of lyrics to give the game away too much and so although each track evokes a response in me, I think it can be open to interpretation.

Do you have a favourite track? Perhaps one that is connected to a particularly poignant experience?

At the moment I’d say ‘Nosema Ceranae‘, the second track on ‘Loss’. It is emotionally tied to the decay of nature and the finality of life cycles.

Can you tell us about your relationship with the remixers featured on Tombs?

The remixes were originally for a tape release on Futuresequence records last year. Some like Bruised Skies and the Cyclist came about via conversations on the internet, some like Zvuku and Sun Hammer were on the Futuresequence roster. Due to the live overdubbed nature of the recordings I had hardly any stems to give them, but each artist turned in something uniquely them. A couple of these connections have led onto further collaboration which has been the best thing to come from it.

Who is behind the artwork of Loss and Tombs? What’s the context behind the photographs?

The photographs are stills from 2 videos that Ben Moon made for ‘Endless Palms’ and ‘Lara Witchcraft’ and both featured these two haunted women from forgotten psychological horror films with lots of repetition. It seemed a natural fit to use these faces for the artwork. I think the older, more haggard face of ‘Loss’ is an apt expression of development between the two EPs.

“I like to think there is a narrative to all the works, but like to think they are very much open to interpretation. Personally I feel like they are ‘hidden’ stories, I’ve always had a fascination with old industry which is a running theme, I’ve always felt there’s a million hidden stories down an old mine. But it’s very much how I interpret the music, it’s go that quality of depth and texture with a sense of something being hidden, obviously both titles are very open but conjure up something in everyone. The footage I use is a combination of stuff from my own archive and archive video which is free to use that would otherwise remain hidden and lost” – Ben Moon

Does the Moon Zero project take up all of your time or do you have other projects we can look out for?

I like to keep busy with different projects. I play drums in a band called Niqab which has been described as a “maximal psychedelic ensemble”. I’m currently working on a series of collaborations with Coventry based producer Bruised Skies, one of the things that came about from the remix project. I also run a studio in Limehouse, London called The Moriaki Skyway. It’s where all the Moon Zero material is mixed but I also record bands and produce other artists and remixes.

Tell us about your connection with London. How has the city helped shape your musical outlook?

There seems to be a growing mood of creativity and openness in London at the moment. I’m lucky to be surrounded by people who are willing to push things and take risks with their music. Running the studio has shaped my outlook a lot, watching other peoples working methods and exchanging ideas as for me, as a solo artist, I need a sense of collaboration to stay sane.

Moon Zero’s ‘Loss’ and ‘Tombs’ EP are both out now on Denovali Records. Order a copy from their web store.