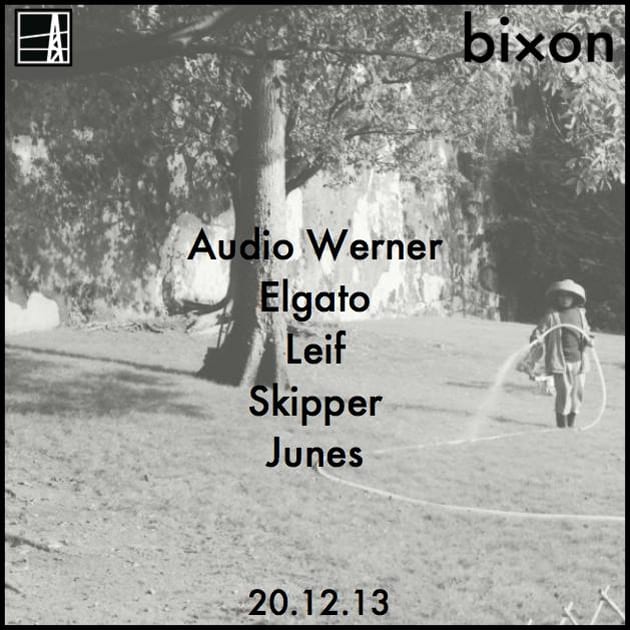 On Friday 20th December Bixon team up with Galdoors Records to celebrate Bixon’s 25th party in the capital with Audio Werner, Elgato, Leif and Galdoors label heads Skipper and Junes at Bar A Bar in Dalston.

2013 has seen the realisation of years of work for label heads Junes and Skipper: Galdoors took on the same name as their late grandparents’ Gateshead-based garage door fitting company that began in 1979, and the two have kept the family-run mentality of the business. Finding common ground between the work of revered artists and exciting newcomers who are all close friends they’ve gained over the last ten years through mutual mindsets.

Audio Werner’s masterfully crafted sound has seen a careful and considered output of unforgettable releases over the last ten years on a few select labels such as Perlon, Minibar, his own Hartchef Discos imprint, and this year the first release for Galdoors. Both his tracks and his DJ sets showcase his range of influences: an unlikely but captivating combination of Jazz, German minimalism and Chicago-style grooves.

Elgato has established himself as an innovator in the dance music scene with barely a handful of releases. His two Hessle Audio EPs and his self-released ‘Dunkel Jam’ output have had clubbers and critics craving for more from this elusive figure, but it takes a project as distinguished as Galdoors to entice him from the shadows. His GAL003 release this November will showcase his housier sensibilities, and as an esteemed selector for years with the Bristol-born Bruk club night and radio show, he will play a pivotal role in proceedings.

Bixon’s November guest in Edinburgh, Leif’s stock rises in the deep house scene year after year. Along with his impressive remix of Junes’ Colours EP on Galdoors earlier in the year, he has released high profile hits on Sudden Drop and Ornate Music in 2013. His appearance on the Rinse FM Hessle Audio show and a forthcoming debut album on Fear of Flying are testament to a producer who continues to develop his sound and gain more and more admirers.

Label bosses Junes and Skipper are delivering the GAL002 and the forthcoming GAL004 release with a mixture of broken hypnotic house cuts and freaky acid groovers. Originally from Newcastle, the lads have been playing music, promoting parties and carefully preparing the Galdoors project for years. Now with consistent and exciting signings until next summer, the label is flourishing and they are looking forward to showcasing their artists for the first time at a party.