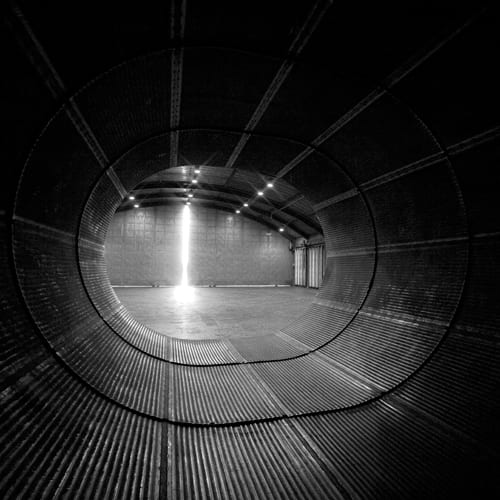 Derelicht celebrate their second event this Saturday with James Zabiela, Tom Demac and ThermalBear in a former US jet engine testing facility near Ipswich, Suffolk. Ahead of the event Gavin Mee, founder and director of Derelicht, has provided us with a playlist of tracks have inspired him to put on the series of Derelicht events. He also shares his reasonings behind hosting the event in a former jet engine facility.

For Derelicht 02 we’ve shifted up from second gear into fourth I think! The noticeable leap in artists, lighting and architecture is very dramatic having chosen a former cold war jet engine test facility out at RAF Bentwaters, Woodbridge. For me choosing this site was a no-brainer as it ticked every box and (given my aerospace background) gives me a very rare chance to play with some amazing architecture in a way that distorts its original purpose.

In terms of construction, the space acts like an anechoic chamber (which can be quite strangely disorientating) as it was designed to suppress the noise from jet engines, so our audience are going to be treated to an acoustic experience that will surpass any club experience once the sound is further tailored to the venue by our Funktion One sound system. And for those that are visual stimulated we have Balint Bolygo providing unique light installations courtesy of Kinetica Museum.

James Zabiela is primed to provide that immersive experience and endless infectious energy Derelicht have grown to love. “I’m definitely more confident about my music and studio expertise,” says James, who confirms his new single “The Healing” is deeper, more melodic and more JZ than ever. Having just launched his own Born Electric label, there’s definitely something new about James, he continues to engage with each single member of the crowd, delivering overpowering emotion and a rich tapestry of musical ability incomparable to any other artist.

Supporting James Zabiela is a firm welsh favourite of ours from the Hypercolour stable Mr Tom Demac. Having evolved from raving at free parties in the woods, experimenting with four-tracks and bi-weekly pilgrimages to The Orbit and Atomic Jam, Tom Demac is now a much revered artist and producer on the electronic scene. No wonder Seth Troxler recently credited Tom’s track “Critical Distance Pt 2” as the “only track i wish i had personally signed this year”. Tom Demac seems to have this innate ability to lay down kinked grooves, slaying bass lines and rich analogue textures. Having ripped apart Fabric, The Warehouse Project and Boiler Room Derelicht are proud to present Toms unique sound, part house, part techno but always exhibiting a serious and well designed underground nature.

Finally fresh from his UK tour promoting the Involv3r release ThermalBear is back again to educate, manipulate and lay down another 3hr lesson in breaks, techno & electronica. If you haven’t already, check out ThermalBears Inverted Audio mix and interview.

Kinetica Artist Balint Bolygo will be showing his ‘Sky Loupe’ laser installations within the tunnel and across the spectacular architecture of the hangar building itself, an ideal location for his projected forms reminiscent of distant cosmic bodies that encapsulate the viewer before disappearing and morphing into another shape.