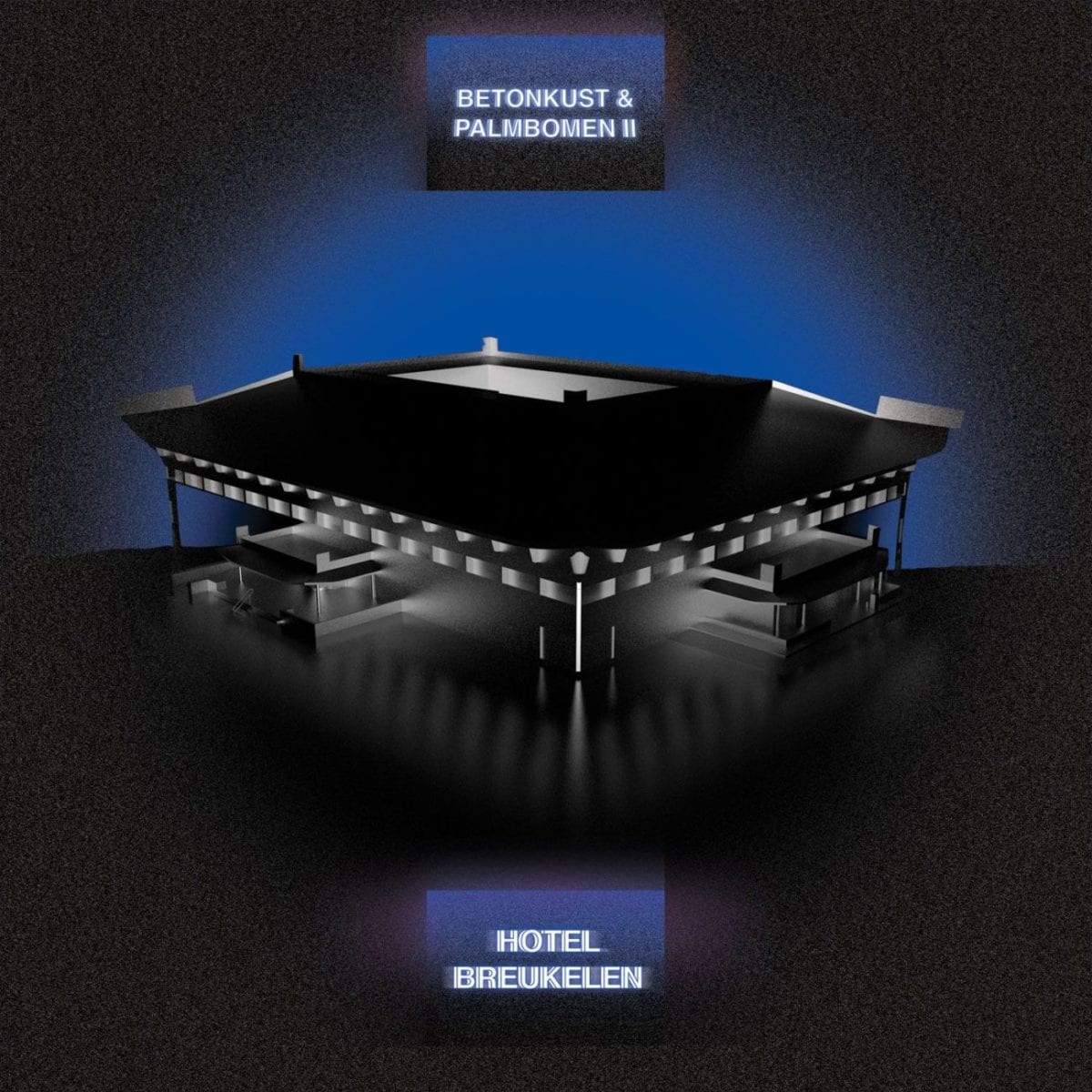 Even though he had already dropped a pair of releases on his friend Bear Damen’s NON Records imprint a couple of years ago, 2015 has been the real year of breakthrough for Amsterdam-born, Los Angeles-based Kai Hugo, an upward trajectory validated by his stunning eponymous album ‘Palmbomen II‘ on Tim Sweeney’s Beats In Space.

Earlier this year, Kai started a new project with longtime friend Betonkust, with whom he already used to regularly grace Red Light Radio’s airwaves, resulting in the excellent ‘The Center Parcs EP’ for Vancouver imprint 1080p.

The Dutch duo are back today with the piping hot ‘Hotel Breukelen‘ for Marsman’s royal-blue-clad label Pinkman, an epic six-tracker ready to drape the dancefloors in its scopious post-industrial lo-fi sonics. We caught up with the pair to find out more about the mysterious place from which the EP draws its title, the influence of environment on their work and studio mechanics. Stream the break-y banger ‘Boven De Wet’ in full below. 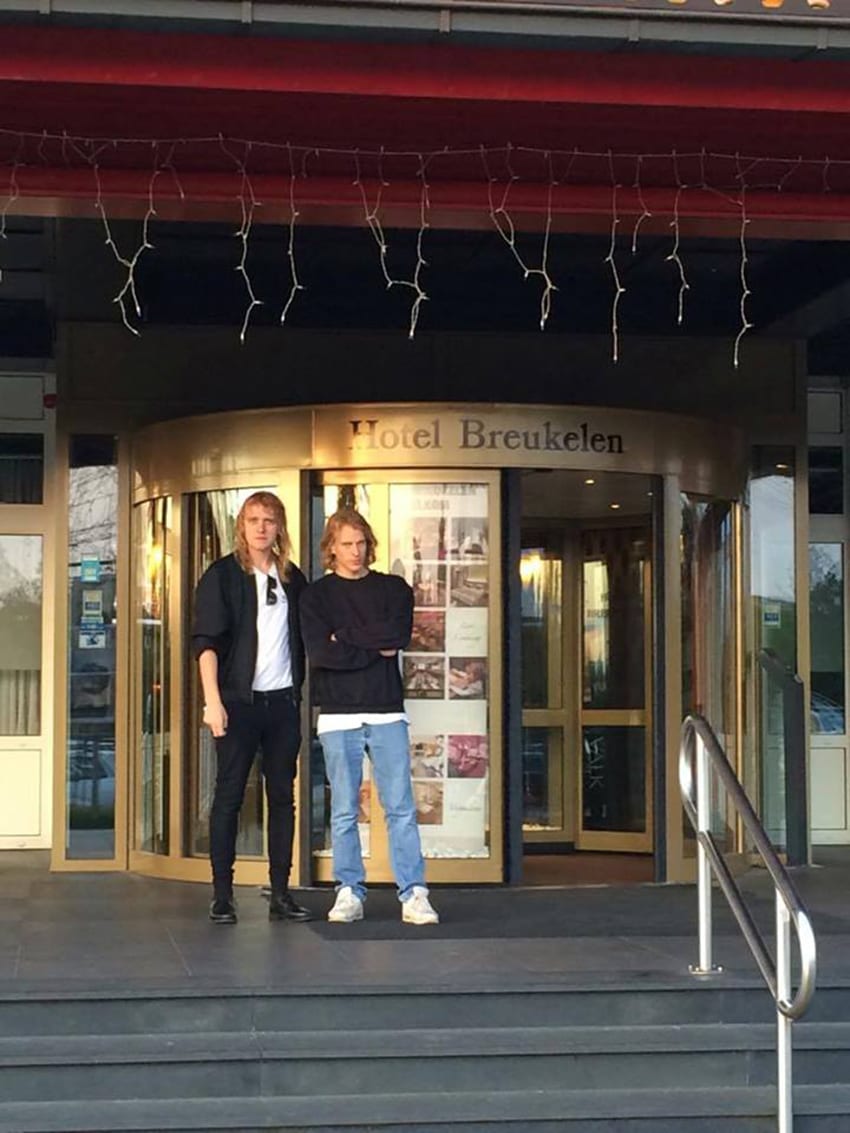 Hotel Breukelen is your second collaborative effort following the release of the ‘Center Parcs EP’ on 1080p earlier this year. How did the idea of collaborating first emerge?

Betonkust & Palmbomen II: Well actually we’ve been working together for years. Betonkust did some additional arrangements and production on the ‘Palmbomen II’ LP, and we always give each other musical advice. Antenna is also involved in this ‘circle of feedback’.

When we were both in Holland with some time off we just decided to do a 50/50 collaboration. This resulted in the ‘Center Parcs EP‘. Some months later the same situation emerged. We made more tracks, and that became the ‘Hotel Breukelen’ record.

How long have you known each other?

Just as Center Parcs was themed around an off-peak getaway in Center Parcs De Eemhof, a holiday park near Amsterdam, this new release takes its name from a rather unique hotel sitting on the road between Amsterdam and Utrecht and whose style evokes the architecture of pagodas. What kind of inspiration did you find there?

Betonkust & Palmbomen II: It’s a very inspiring environment with electricity pylons, a highway, a train station, a bridge, but also trees and a channel with huge container ships. A typically flat Dutch landscape. Some people think it’s ugly and depressing.

When you talk about ‘Hotel Breukelen’ they tend to laugh, or they like it ironically. I think we find beauty in sadness and tragedy or something like that. It’s hard to explain. It’s just so easy to think of a scenario that suits this location. Corrupt politicians who go there to conspire, businessmen with escorts, drug dealers with suitcases and sunglasses, and at the same time very ordinary Dutch families are having dinner at the next table. 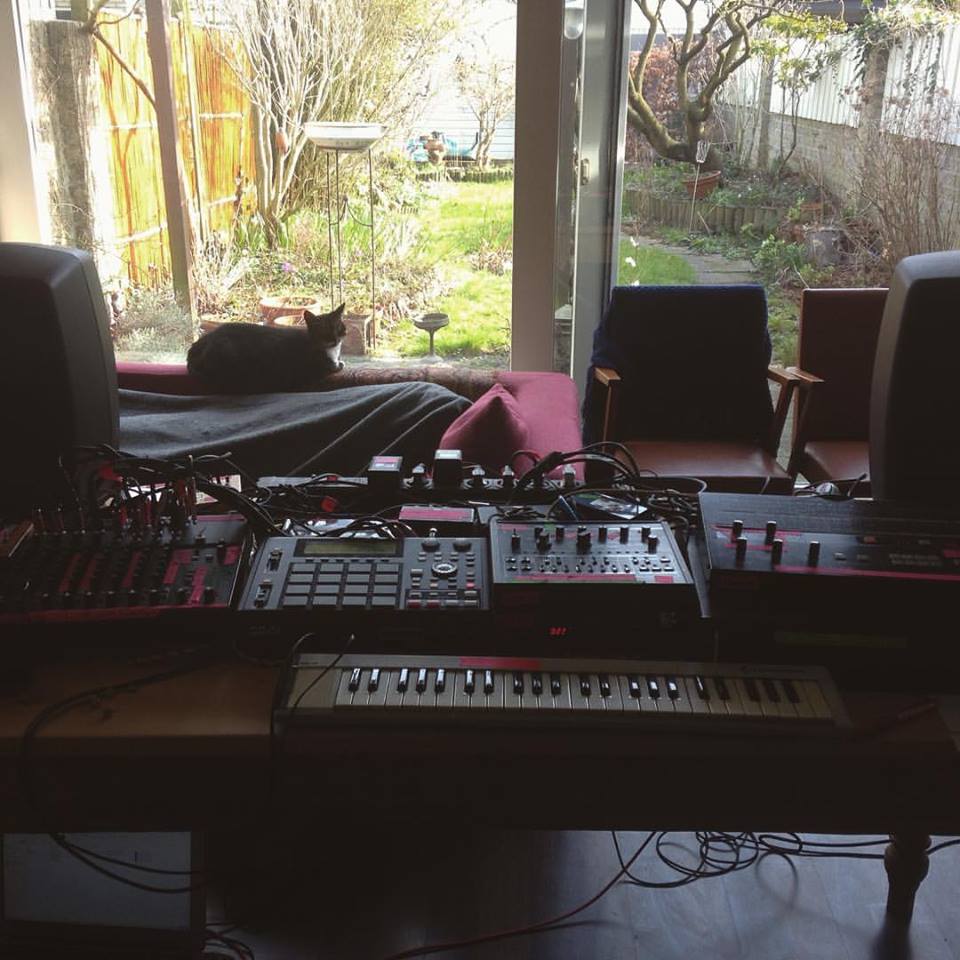 What impact do environment, places, architecture have on your work? Do your surroundings influence the way you produce?

Betonkust: You can’t make depressing music when you’re in the sun next to a pool with your girlfriend. On the other hand, you can lock yourself in an empty room with some equipment (ok not completely empty) anywhere in the world and just get into a certain mood. It’s all in your mind. So yes, your surroundings will probably have some impact on your music, but you can also choose to shut the world off and go more introspective. This question is kind of hard because a lot of stuff goes on in one’s subconscious.

Palmbomen II: I don’t think it changes me at all. To me it’s all practical. I can make very dark tracks here in sunny LA or the other way around. It’s just a nice thing to change locations and to shut off from the world. That’s why we go to remote locations for me. It’s almost as if it gives more of an influence to the listener, imagining that we made the records there, than it does to us. So it’s all marketing in the end :v (intended smiley)

When did you first come into contact with Marsman? How did he approach you for this release?

Betonkust: Marsman liked my artist name for some reason. He asked me for demos. We were communicating online for a couple of months before we actually met in person. I think it was in a club in Rotterdam. After that we went to a pub and ended up listening to vapourware in someone’s living room. Marsman was very enthusiastic about a number of tracks that Palmbomen II and I had recorded and wanted to put them out.

Palmbomen II: Well he’s also just a friend of Sasha/Antenna and we got in touch through Sasha. I helped Sasha move two years ago and me and Marsman carried a washing machine upstairs together. Because Sasha is so close to us we’ve always been following what he did with his Antenna releases there on the Pinkman label and with his sleeve designs for the label. So we were always aware and stuff, Marsman sometimes seems like a cranky ‘peat digger’ from the east of Holland but he was quite enthusiastic through our whole journey to do something. Coming up to us when we play a new song and demanding to release it. 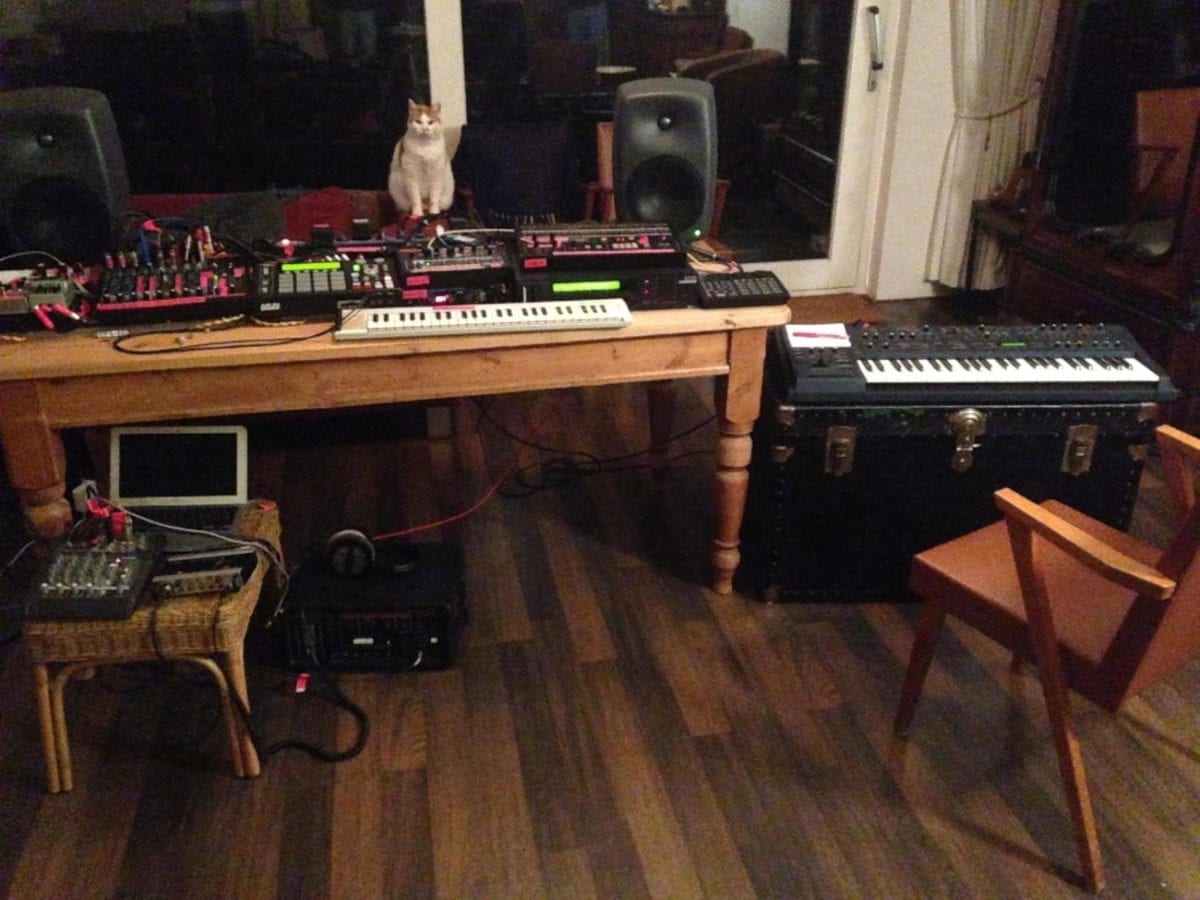 What’s your favourite release on Pinkman and why?

Betonkust: Probably ‘Odessa‘ by Antenna. His tracks have atmosphere, strange but beautiful melodies and nice dusty drums that sound great in any club. Good for both listening and dancing.

Palmbomen II: Yeah it sounds like stupid or like internal politics but I really love all Sasha’s releases on Pinkman. But also that Creta Kano with the Legowelt remix.

What gear did you use the most on this release?

Betonkust & Palmbomen II: For this project we bought a Roland JP-8000 on Marktplaats (the Dutch eBay). It’s the classic trance SUPER SAW synthesizer. Palmbomen II had to pick it up at a guy named Ferry in Rotterdam, and for a moment we thought we were going to buy a synth from the legendary Ferry Corsten.

That would have been a good story. Of course, it wasn’t Mr Corsten who opened the door. So yeah, we used the JP-8000 as a main synth on a lot of tracks. Boss DR-660 for drums, x0xb0x for acid, some romplers and a very basic 8-channel mixer. We also put the whole mix through a nearly broken tape device.

How do you split up the workload? Do you have an assigned role in the studio – one making the drums, the other doing the bass… for instance?

Betonkust & Palmbomen II: We don’t really think about it like that. Someone just starts making a drum pattern or a melody and you work from there. Before you know it there’s a new track. Don’t think about it too much. Make a bunch of tracks and keep the good ones.

What records have you been rinsing lately?

Betonkust: I’ve been going through I-F’s discography again and the amount of beautiful music that that man has made is just incredible. Can’t say enough good things about it. I’m also heavily into Ministry at the moment. This track by a Belgian band gets played a lot too.

Palmbomen II: I am listening right now to an album from Book Of Love, but new stuff drips in slowly. I don’t think we’re such ‘diggers’. We like to create new things ourselves better. I DJ so much stuff that’s just from our little circle. (Antenna / Betonkust / Palmbomen). We rehash a lot of old stuff too.

Betonkust just introduced me a month ago or so to this old gabber track called ‘Lost Minds‘ (listen to it at 2:16, that’s the good part) and he found this on an old Thunderdome compilation, and I then made an edit of this to DJ. I’m crazy about this thing.

The original had an Aphex Twin sample in the drums if you can hear it. The changes of the original are just too crazy and it’s all too fast. All that was totally normal back then. So I don’t know, we’re quite not aware of what is happening really in the hot and happening vinyl world.

What will you be up to over the few next weeks?

Betonkust: Playing some live shows at Magneet Festival and Brigant Festival, a DJ set in Groningen and a live show in Madrid (together with Palmbomen II). It’s a pretty busy month.

Palmbomen II: I’m now back home in the US finishing some music videos in LA after having spent all summer in Europe. At the end of this month I’m going to play a lot of shows again like the Madrid one with Betonkust.

“Hotel Breukelen” is scheduled for release 12th October 2016, order a copy from Bandcamp.