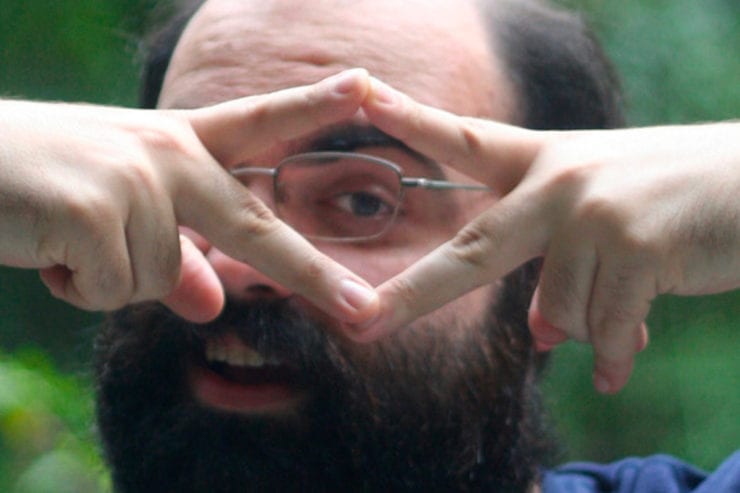 One of the many projects and side-ventures of Andrew Field-Pickering, alias Max D – deadeye vibe merchant and half of Washington flagship duo Beautiful Swimmers along with fellow sidekick Ari Goldman, Dolo Percussion is – as its name suggests – a bespoke drum-luvin’ affair, fully geared towards exploring the broad spectrum of potentialities offered by perc-splattered DJ tools and even bolder poly-riddims.

Shaped and fitted to jibe the diverse moods and tempi of the bounciest sets out there, Dolo’s back-catalogue has now been gathered into one single release, ‘Dolo 4‘, which spans the entirety of the first three volumes originally issued on L.I.E.S., Future Times and The Trilogy Tapes, plus three unreleased jams to top it all on a fresh note. You can now stream ‘Dolo 16‘ from our channels down below.

To celebrate the release of the album, we asked Andrew to list some of his all-time percussive favs and inspirational drum-related videos off the YouTube vortex.

These two tracks (and a ton of other PJ and Relief stuff) is a huge influence on Dolo Percussion, as I’m sure mad people can tell. Chicago stuff like this, as a DJ, always struck me as the swing middle-ground for going in between genres. If you need to get out of some UGK, or some very swangin NY Garage shit, there’s def a corresponding PJ drum track that can set you up to go into Chicago or Detroit tunes, with the right swing and everything. I think of Paul Johnson as the drum machine master. He def has about one million tunes that are just perfect drums for about 4 minutes. What a G. I need the Baby Pop 12″ so bad.

This is the dude to listen to if you want to hear complete tornado power. Rest in peace. He does that wild drum roll (another tornado) they sampled to kick off Beastie Boys ‘Paul’s Boutique‘. There’s a lot of amazing 70s/80s Weather Report and Jaco P vids where Mr. Mouzon just goes ballistic. OOF!

I watch the Pocket Queen’s channel and videos a lot (I watch a lot of drum videos on YouTube) because she is sick at drums and just seems to also have such a good time playing too, as evidenced best in the George Kranz cover.

This is one of my favourite videos that I watch pretty often. On some nerd shit I actually love the way the video recording sharpens up the sides of go-go drums, really reduces it to just like rhythm data or something. Plus this video offers a little vignette of the city (DC) too, that’s the basketball stadium those dudes are in front of. I love how the cameraman tells her to get out the way and she won’t, it’s super cute.

I watch this video an awful lot. There’s other videos of his that I watch a lot too. I actually find this one super relaxing, despite all of the clusters of frantic stuff, its not that frantic. I don’t know to go as untethered as this type of thing just using samples and machines, but I think about it a lot.

LATIN RASCALS – IT MUST BE YOU

This isn’t purely drums or anything but Latin Rascals are so deeply amazing, and a definite influence on how I program drums. I was always drawn to the chopped up bonus beats and LR were sort of the first cosmic next-level choppers. I always think of drums as the thing that can push forward the psychedelic edges of any music type, like the hi-hats on trap beats, or this old era where pop tunes were getting micro’d and macro’d by the choppers. That sound is always in my head.