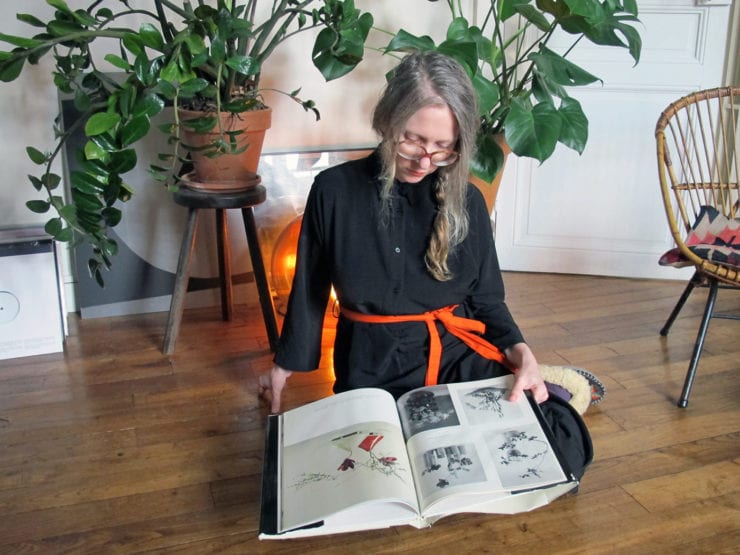 Navigating her way across ASMR reflexivity, vaporous atmospherics, spoken word, neo-classical and some prog-rock-infused sense of spacious abstraction, French producer Félicia Atkinson has been laying the foundations to a body of work unlike any other in the current landscape of electronic music, distinguished by its unique approach to melodies and textures, as much as its vivid interdisciplinarity.

Félicia just recently resurfaced with her tenth album, ‘The Flower And The Vessel‘, issued like all her latest long-players via Shelter Press – the multi-faceted label she co-operates alongside her life and art alter-ego Bartolomé Sanson. Keen to learn more about the roots and shoots of her subtle craft, recording methods and matters such as the sacred in art, we caught up with Félicia for an in-depth chat. 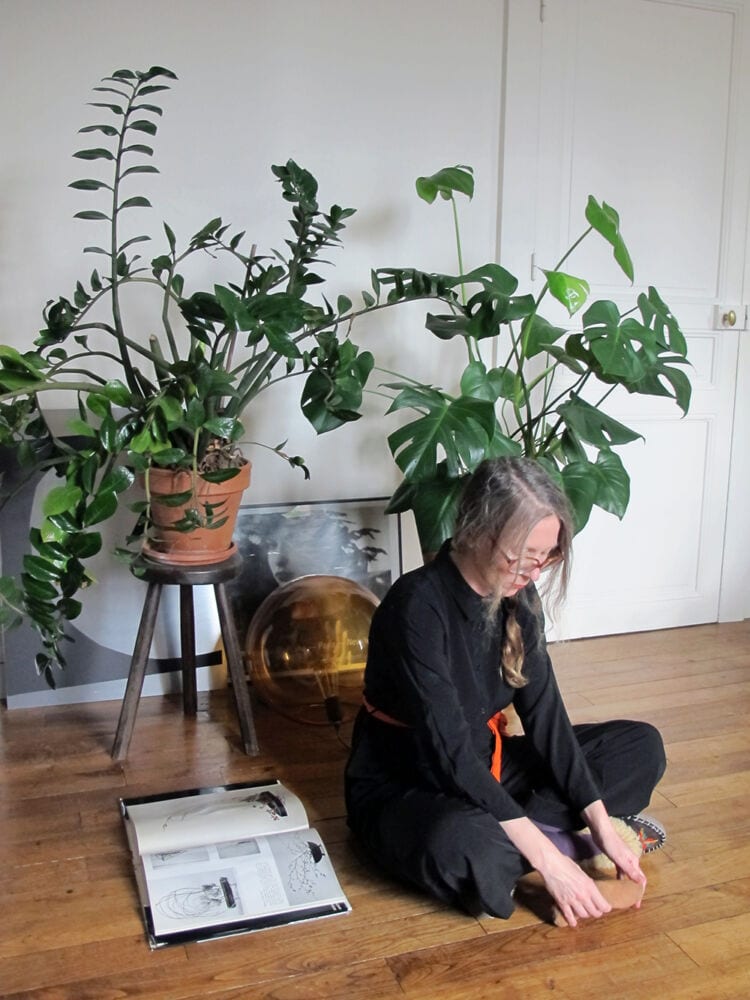 Your tenth album ‘The Flower And The Vessel’ is due for release imminently. It was recorded during a particular period for you, as you were pregnant and on tour. How did this pregnancy effect your creative and existential vision of things?

I was feeling happy and never felt lonely during that time. I enjoyed recording whilst travelling a lot, it was a conscious choice. I felt I was playing for my baby. All three of us were travelling together; Bartolomé, me and the baby in my belly and the way we were traveling was very contemplative and mellow.

The way I am touring is also a bit special: a book fair, a couple of exhibitions, research time in a library, a few shows. It’s not a typical way to tour. We can allow ourselves to stay a few days in the same place. Visit national parks. It’s not very interesting economically wise but I always have a lot of work done through those journeys.

For example we were in the Olympic National Park in April 2018 and I would record lying in the bed while watching the rain falling on the Douglas Fir. The smell was incredible. I love to use smells as possible scores. I wrote poetry there as well and made some drawings. Those travelling moments are very creative.

In an act of creation, be it ceramics, flower arrangement, philosophy or painting there is always this dialogue between idea and form, between support and surface, or even, if you dance or sing, between the breath and the body…

Ten albums in 10 years is quite the accomplishment. What would you say is the biggest difference between the 2008 version of you and your contemporary self, both as an artist and person?

I feel I know a bit more what I am looking for, and therefore how to surround myself with people, places and things that give me joy and inspiration. I feel thankful for that. I also feel more confident with my tools in a way. But on the other hand, I feel I have much more to discover and work for. The journey is not over!

Music seems to be a means for you to question the idea of belonging and connection to the natural order. Is the inclusion of field recordings and organic samples for you the way to re-connect musically; to maintain that subtle balance between your imaginary world and the reality of our surroundings?

Maybe… field recordings are a way to sketch what is surrounding me in everyday life, but it also brings me in an everyday state of deep listening. I spend a lot of time listening without recording. I feel touched by those sounds, and recording them sometimes is a way to acknowledge them and archive them, get into a relationship with them. Care about them.

They become part of an imaginary community of sounds. Right now the sound of the rain in the Swiss Jura is melting with the sound of a shower and little noises of my baby sleeping but also the keyboard of my computer. It’s already music! You said you managed connect yourself to the world “with small gestures: recording my voice, recording birds, a simple melody”. It all feels like delimitating a territory through repetition, a concept such as the one Deleuze explored in his interpretation of the lullaby. Was it this kind of process you went through?

“La Ritournelle” is a beautiful concept. I enjoy reading Deleuze for his way of drawing space inside concepts, in making philosophical ideas more visual. In my case, I am not sure I am using repetitions that much, I never use loops, only delays, my time is pretty linear, rather than circular in the way I am building music.

Layers of linearities, like different layers of perspective in a painting. But I think and hear music as a space indeed, as a territory. I hear distances, levels, depths, volumes.

Actually, I am interested in lullabies nowadays also because I deal with the fact of putting my child to sleep and it’s always a challenge and a knowledge to get there, but I learn a lot from him. I learn about repetition, rhythm and how to draw a space with sound that he feels comfortable enough to fall asleep in.

I am very interested in another Deleuzian concept which is the one of “becoming” (“Devenir” in French). The ability to shift, evolve, transform and acknowledge that stage of transformation as something itself.

Music is also about time and time moves things, makes them different, makes them shrink or get bigger. It’s interesting in a sound perspective. Nothing is permanent. Some people say that time doesn’t exist though. It’s a vast question.

The press release speaks of your interest in exploring the gap between micro and macro-cosmic scales, and throughout the album there’s indeed moments of intense focus and sudden distancing, acute close-ups and ample zoom-outs. How do you create this effect of space-time distortion?

As I stated previously, I think sound as a matter, the same way I do a sculpture for a painting or an installation. I use Logic Pro and basically cut, paste and stretch my sound like it was something flexible and soft.

I had “revelations” about micro and macro while living in the Alps surrounded by the mountains, wayyy older and bigger than me, and also after visiting the desert in Arizona several times, California, Utah and New Mexico.

I am fascinated by the Petrified Forest in Arizona and this gigantic delay it offers: a tree turned into a stone, gently washed by years of time. It makes me dizzy and happy at the same time.

You seem to have used a wealth of instruments on this album, both emulated and not. How large was your palette?

I wanted to bring in the same “real” instruments and digital instruments, so I went into two studios and recorded there, and also used midi instruments. Each time it’s an encounter.

The instruments are kind of a friend with whom you are playing ball and try to find a harmony between what you want to make and what the instrument can offer. I enjoy very much this dialectic. And also, I have a strong sentimental relationship with Fender Rhodes, vibraphones and Wurlitzer. They are good with me.

Your  new album gives further space to silence and pauses, allowing more magnitude to listening appropriation I think. Whilst Satie, Ravel and Debussy are quoted as influences, I also felt some artistic lineage with the more minimal side of Arvö Part’s work. Is it something you relate to?

Thank you for mentioning it. I really admire his work and his relationship to the sacred. His music could totally play a fatherly role to me even it’s not. And of course his piano pieces are important for me. But his music has a total absence of humour, which makes sense with his music of course and the context he writes it in, but it also shows that we are not addressing the same kind of contexts.

My music is more “minor” and less serious in a way. Maybe more feminine and pagan also? Animistic? I don’t know… I have a personal relationship with the sacred and the invisible and for sure it infuses in my compositions. But also, I feel I am way more superficial.

I wish my music could be be played in a supermarket or in a dive bar. You know, in the daytime I listen mostly to Neil Young or Springsteen’s Nebraska. 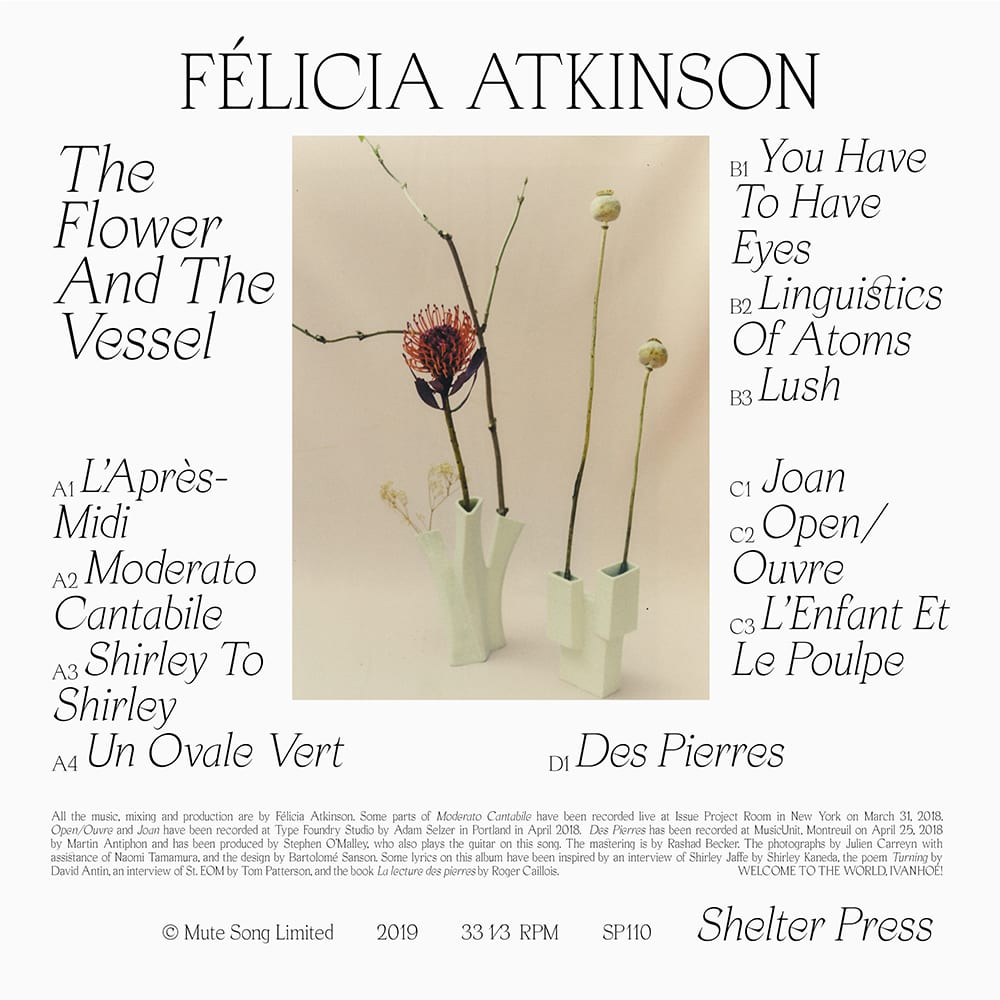 On ‘Des Pierres’ you collaborated with SUNN O))) guitarist Stephen O’Malley. Can you tell us more about the making of this track in particular?

Stephen invited me to do a session for his radio show Acid Quarry at Music Unit Studio. We recorded a whole day and he produced and mixed the track with Martin Antiphon. He just brought this book by Roger Caillois that is actually one of my favourite books and we used it a score, full of serendipity. I played different keyboards and used my voice and Stephen played the guitar. It was very natural, spontaneous and “à propos”.

You co-run Shelter Press with your partner Bartolomé Sanson, a label that doesn’t only release music but also books, zines and more. How important is this interdisciplinary format to you?

I guess it’s natural since I am a visual artist and a musician and we have a lot of books and records in the house. It’s a bit crazy also because it means it’s way much more work to do.

Is it safe to say self-releasing your music makes the making-to-issuing process “purer” and less of a hassle?

My music was shaped by the fact that I would release it on Shelter Press. It’s an everyday dialogue with Bartolomé. I can talk and think about what I want to do for my releases all the time, it allows me so much comfort, support and care that it’s difficult to imagine leaving this kind of super fitted context.

What’s coming up next on the label?

What values do you particularly cherish?

Care, freedom, positive energy, peace. I believe we have to care about the nature that surrounds us, the animals; the people and the variety of ideas. I believe in the power of imagination and I don’t think poetry or abstraction are superficial.

I believe in education and I feel children and babies should be more at the center of society because they give us a lot to think about through their new eyes; and because they are the future.

What faults do you least forgive?

This is a very strange question. I feel it’s a bit too moral and personal at the same time. I would ask to yourself in return: what faults do you least forgive?

I am playing at Musica Sanae Festival in Sokolowsko in Poland and at Atonal in Berlin with two new commission works. Right now I am in a mountain in Switzerland looking at the clouds, after having played in Bern two days ago at Damfzentral (great people) and on my way to play a show at Ooor Records in Zurich (great people as well). We’re gonna take a walk in the forest under the rain in a few.

‘The Flower And The Vessel’ is out now via Shelter Press. Order a copy from Bandcamp.