Over the past decade, Italian born producer Franz Scala has been operating the consistently on-point Italo centric imprint Slow Motion Records together with Fabrizio Mammarella and Federico Scala out of Berlin and Italy. They also operate Wrong Era – an international sister-imprint releasing non-Italian born Italo disco and new wave music.

To coincide with the release of the seventh and eight edition of the Italian Dance Wave Disco compilation, we paid a visit to Francesco’s studio situated within the Sameheads Studio complex in the heart of Neukölln in Berlin to learn more about his record label and studio antics. 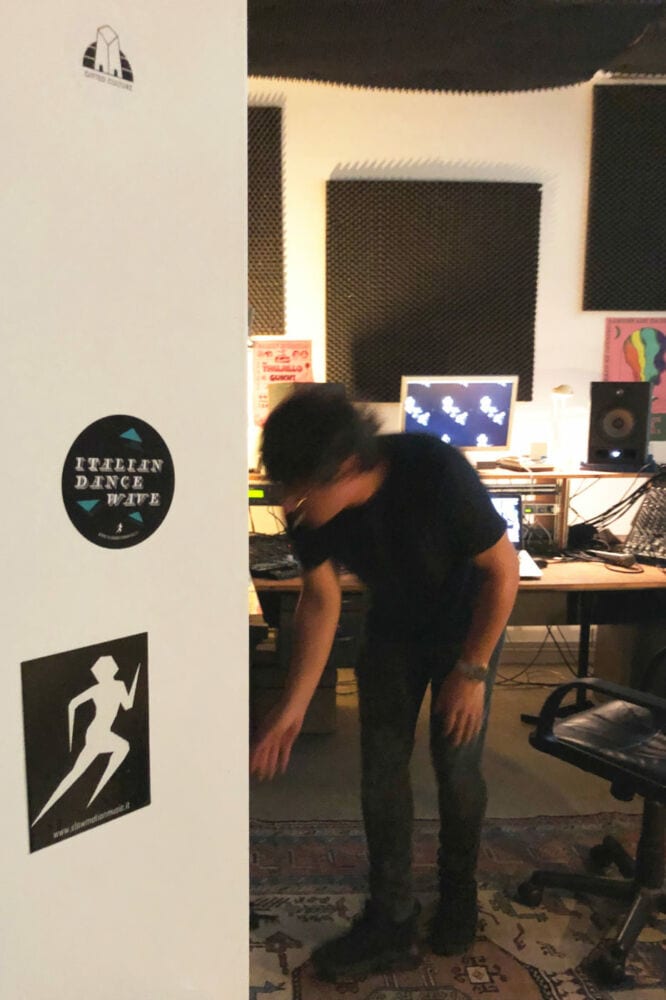 Hi Franz, thank you for showing us around your studio – first up, how long have you had your studio here and what provoked you to settle here at Sameheads?

Ciao Tom, I’ve been here at Sameheads for the past seven years. This is my first and only studio I have ever had. Before that I had the classic home studio basic set up, but since having a proper studio it has changed my way I make music. Since I moved in Berlin I was always involved with Sameheads and when the space was made available, it was the perfect spot to create music.

How did you first encounter Sameheads co-founders Nathan and Harry?

In the beginning there was Nathan, Harry and Leo – but now Leo is taking some time off. I met the Sameheads brothers 12 years ago at their first Birthday party a few days after I moved to Berlin (pretty lucky). At the time they didn’t have the club, instead they had a shop close by at Bergmannstraße selling independent fashion and organising amazing one night disco raves in off locations all around the city.

Cast us back to when you first moved in and what the space was used for back then – have you had to do any modifications and improvements to make the studio suited to your needs?

The studio used to be a storage room for a shop in the building located opposite to Sameheads on Karl-Marx-Straße. When the space was made available I was offered to rent it, because you could not really use that space for anything – apart from making music.

At that time rent was still pretty cheap in Neukölln, and you could get a very good deal. It was just an open space and we got offered it by the landlord, so we proposed him a plan that how we would like to use it as studio spaces so that he could renovate it before we would moved in. The workers built everything from scratch and Sameheads Studios was born.

Who or what provoked you to start experimenting with producing music?

Ever since I have been into dance music I’ve always felt the need to make my own. So when I moved to Berlin I decided to give it a try. I finished University in Italy and I had a lot of free time. The original plan was to study German and then find some type of job related to my studies…but things changed.

What was the first instrument you bought to make music with and so you remember where you bought it?

It was a Korg R3 purchased from Thomann. It’s a great pice of kit to start making music and to play live with. I made all my first productions using that, plus  a few plugins. It gives you a wide range of sounds and you can treat sounds very easily by making your own. It has an arpeggiator, sequencer, internal effects and vocoder. 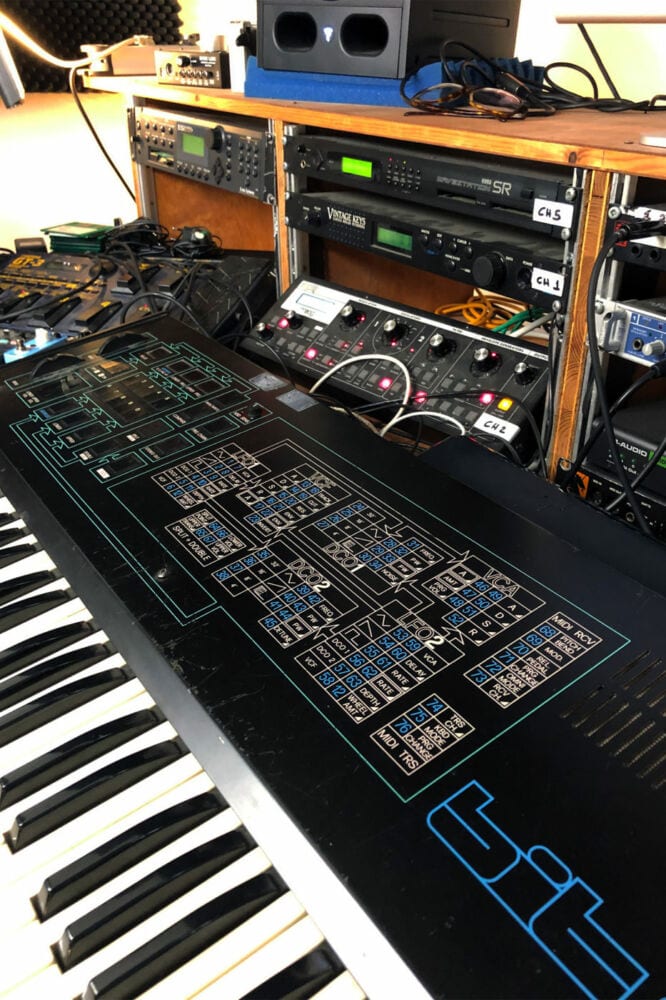 Cast us back to your early teenage years – what music (bands and producers) were you into and what made you fall in love specifically to Italo dance music?

When I was 14 years old I had a band called Miasma in my hometown of Chieti, Abruzzo in Central Italy. We were a pretty decent young band playing our own interpretation of sonic noise rock and we managed to have many concerts. My main influence at that time were Melvins, Ministry, NIN, Sonic Youth, Einstürzende Neubauten, New Order and Depeche Mode…I could go on and on, but I think you got it.

The Italo related thing came in the Summer of 1998 when I went on a one month holiday to Berlin. It blew my mind, especially at that time when I was thinking about rock band related music – dance DJs were a different word. Berlin showed me that everything is related and there are no borders or divisions within music. Back in Italy I started to dig into electronic dance music and discover all the sub genres, then I focused on Italian 80´s music as it was part of my background.

From what you have in your studio – what is the most obscure or rare instrument that you have?

I don’t know if you can list it as obscure or rare, but my Bit 99 is the one synth that I feel fits this category as not so many people have it. It is cheep and is pretty underrated in my opinion. I bought it six years ago in Berlin and payed €250 for it. Now the price of the synth has gone up and costs around €800. The Bit 99 is one of the best looking synths around and it is Italian. Most importantly it sounds totally different.

Crumar is one of the traditional Italian synth manufacturers that was established to compete against Moog, Arp, Roland and Korg. The Bit 99 is one of the first synths without knobs using a button control interface with the parameters printed on the front.

Editing is pretty easy and straight-forward to do. It has digital controlled circuitry and oscillators, but its signal path is analog. You can compare it with Roland’s JX8P or Korg’s Poly800 but it never found as big audience as those synths did. I think this is why it sounds more original as it has not been over used in dance music production.

I’ve noticed that you have a selection of floppy discs on your desk – what instrument do you use these with and why do you continue to use this format?

Tell me about this artwork placed above your Korg Poly-61? Who is it painted by and what does it mean to you?

This is a pice of art from my Wife, she made it after coming back from Australia. For me it is like a portrait of Aborigine robots getting together. I like to hang out in the studio and listen to all of the records that I brought with me to Berlin and all of my records from the 80’s and the back catalogue of my record labels. I like to be in a comfy and cozy studio with just the machines, this artwork makes the space less cold and more like home.

Can you describe your usual workflow is for making a track – do you start with the beat first or the melody or pads?

Yes I usually start out with a beat. I record the midi part first with a nice bass line and then I will try laying different sounds on top of that. If I find nice parts then maybe I record some more parts on top of that.

I don’t think I have ever started a new track knowing in what direction it will go in…I just go with the flow. Sometimes I record directly from real instrumental musicians. I don’t do this often but I am thinking of doing this on a more regular basis. I’m getting to the point that you cannot always be good at everything. There is an abundance of amazing musicians here in Berlin that can play a lot better than me. 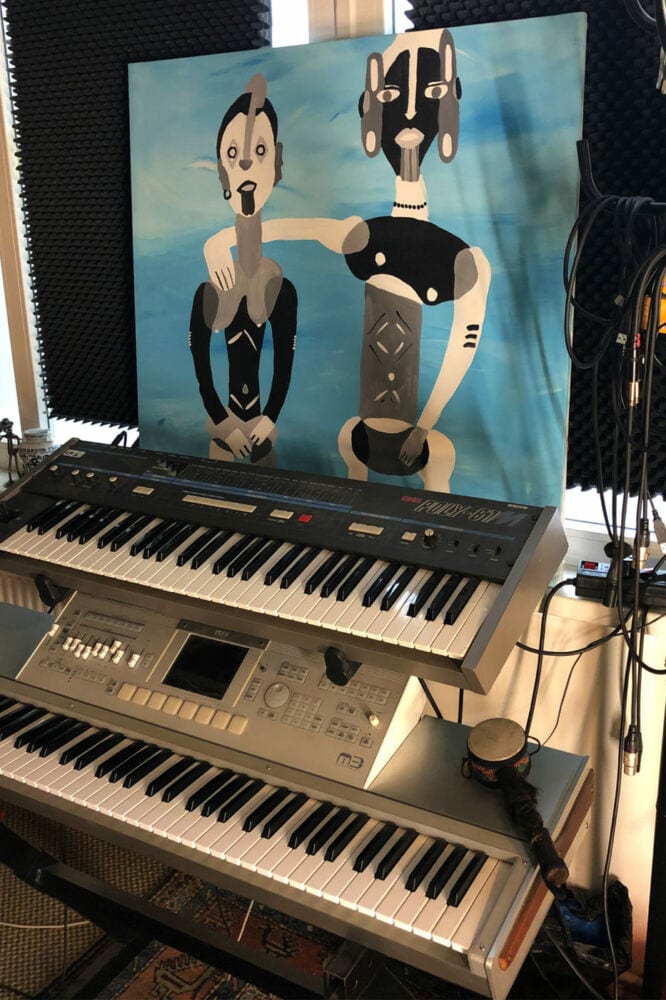 You run Slow Motion Records, focusing specifically on releasing Italian produced music. What spurred you to set the record label?

Releasing specifically Italian-born producers is the concept for the label. Essentially it is modern dance music inspired by the 80´s Italian musical heritage of disco, Italo, new wave and soundtracks. We aim to make modern synth music that can be played with recent house or electro as with the originals from the 80´s.

What has been your proudest moment since setting up the label?

Proudest is hard to define, let’s just say I am proud when an artist or people I value point to us as a reference for the Italian dance sound.

Apart from yourself there are other producers with studio spaces here at Sameheads – tell us about your neighbours and how you interact with one another in terms of music, collaborations or simply troubleshooting problems.

My Sameheads Studio mates are Telephones, Mat from Junior Boys, Pellegrino and Tornado Wallace. We have five studio here and since the beginning no one has left beside the ones that moved out of Berlin like Hunee, Luca Lozano and Milo Smee (Kruton).

We collaborate a lot, some make records together and of course we swap pieces of gear between us and ask for suggestions. We all work in a different musical field, but you can still feel the connection between our music.

What’s coming up next for you and Slow Motion?

Currently we have a long term plan with releases. We have a mini album from Armonics and System Olympia, plus 12″s from Ma Spaventi, Fabrizio Mammarella, Filippo Diana and Heinrich Dressel.

There is also the last two parts of the Italian Dance Wave to be released, these will be part 9 and 10. I also need to mention our international sister label Wrong Era, which will release records from Marching Machines (Spacid from Radius Records), Aphonia (Inhalt) and Rambal Cochet (Volta Cab). Let’s just say that we are safe until next year!