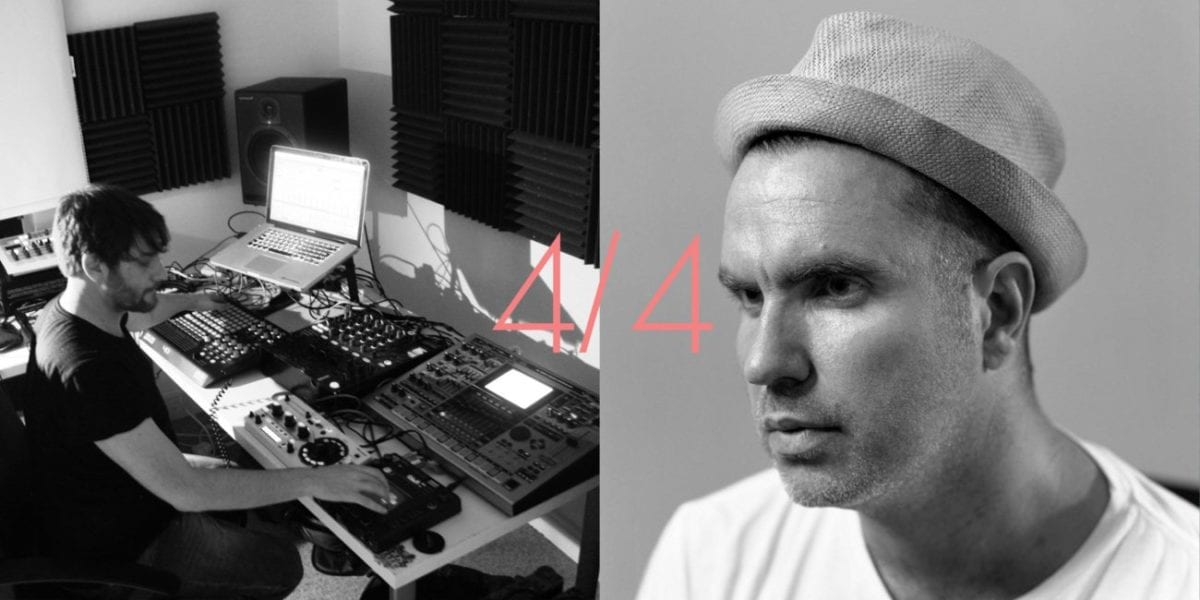 Continuing on from Sunday’s piece. Inverted Audio’s Simon Whight looks into the impact of fatherhood and children on some familiar names within the scene. Moving on from the lead-up and first manic moments in charge of a newborn, this piece looks at the journey through childhood.

There is a vicious irony in the collective amount of merde immediately thrown at you from all directions when you are presented with sole control of your infant. As you edge past those tentative first few weeks, with a sharp intake of air and a little mental steeling, this eases off and life regains some semblance of normality as endurance gradually returns to existence. Concepts such as your daytime garb being different to what you were wearing when you crawled into bed the previous night, an evening meal that hasn’t been brought to you by a man knocking on your front door with a bag’o’filth, or a holy and revered six hours of uninterrupted sleep, all gradually start to slip back into every day life.

Sitting at the end of a year in charge of a little one, Joseph Keevill – the marathon production machine behind the moniker Saytek – looks back with sage experience: “It was quite difficult at first,” he remembers, “lots of sleepless nights in the week and very late nights on the weekend when I was touring. My life now consists of family and music, with no time for anything else. It’s my work so have to make time no matter how tired I am, just like other job.”

Having a child has in turn provided focus, showing that the touring career, one that can mistakenly be perceived as a worldwide sequence of hangovers and debauchery, can suit the family life as easy as a PC bound job spending a third of your day sat under strip lighting: “It’s made me even more serious about my career,” he concludes, “everything has changed. My whole life is now based around my family. I think of him and my fiancé first.” Something that is evident in his studio work, with releases being paired to design work by his fiancé and a track dedicated to his son Jacob, which drew out a more emotional side to his usual rolling party time fare.

Obviously relishing the entire experience, Joseph has opened himself up for further punishment after recently announcing that another Keevill is on the way. Have there been any lessons learnt ready to ease through the experience a second time? “We will have to see,” says Joseph, effectively confirming that, despite the outwards illusion of competence, every parent is effectively winging it. “The next one is due in September,” he continues, “everyone says your second is easier but the first 6 months with Jacob were such a blur.”

With the blur comes the unforeseen challenges, which, in my particular instance, took the form of a now abandoned attempt at bottle training. Despite the best efforts of creating a soothing soundtrack of Aphex Twin’s Selected Ambient Works 2, a variety of Boards Of Canada playlists, the ambient landmark in KLF’s Chill Out and a scattering of The Orb’s early works, evening nummies with daddy pretty much transpired to a small baby futilely tonguing a bottle round his mouth while making assorted sounds of frustration. It’s something you laugh at out of context, but in real world terms this process is fraught as you are haunted by a collection of concerns.

These concerns stem from a grand vision is the need to give poor old mum a break from debilitating tiredness, general aches and the freaky experience of afterpains. The latter of those is a particularly nasty phenomenon that kicks in as child cries and feeds in the early days, where your body releases a load of hormones that cause debilitating contractions. As session after session passed with the young pupil taking in scant millilitres in nourishment, an awareness grew of dwindling monetary reserves.

Then, dwindling in equal measures, are the hours spent in the evening on this and a variety of other essential child maintenance duties. Time spent on this meant time not sat in front of a laptop in my scant out of work hours, with Gmail folders showing unread emails in double figures, every one representing a crop of promo company emails begging attention. Each release date that passed became another albatross to hang around the neck, ruefully missing the opportunity for income through writing copy, further highlighting the need to get the little bundle up and independent for nursery days to come.

A need to provide is a point touched upon when speaking to Classic Music Company main man Luke Solomon: “The initial impact is pretty major and is so time consuming, everything else takes second place,” he says, “so it does have quite a large affect on your career initially, especially when you are self employed.” Yet there are no excuses, no thoughts of giving up: “I know that I have to put food on the table and help pay the bills.”

Still, even with  the looming storm clouds of everyday finances, the dedicated father can only see the sun shining through the breaks in-between. Your offspring evolves from an endearing noise blob into a constantly suprising young being. It’s impossible not to laugh every time the little man emits an adult magnitude fart, or how heartening it is returning home from work to a person who displays uncomplicated glee at seeing you step through the door, or becoming mesmerised by his vigorously thrashing limbs as he lies in his play gym – stimulated by its strangely Tevo Howard-esque soundtrack and flashing multi coloured lights – while displaying a grim lipped determination in a fashion usually reserved for 4am Fabric warriors. Something that Joseph Keevill, himself accustomed to rocking Fabric until the early hours, can agree with: “Coming back from a weekend away touring knowing that he is going to be there makes me so happy.” Pure and uncomplicated.

Strangely, you feel a certain regret at the passing of these early days, even before they have played out, looking back over family anecdotes as if they are already committed to dusty archives. Usually the highlights are slapstick, often at the expense of Dad as a latent bumbling gene activates on attaining fatherhood status: “I recently went out with him really and played in the park for a couple of hours,” recalled Joseph Keevill, “I was so happy that I managed to dress him well and quickly, with him kicking a ball around, that it wasn’t till I met my fiancé she told me I had put his shoes on the wrong feet. Jacob and I where both blissfully unaware the whole time.”

At this point there is a confession to make: this isn’t quite my first taste of fatherhood.

My delightful lady came complete with a three year old lad, giving me the pre-packed ready meal heads up of what is to come once my firstborn grasps concepts such as basic motor functions and solid food. A child that progresses from a passive sponge into an active participator, still requiring the environment of stability but exhibiting a curiousness and evolving individuality.

These are the rewards for all those months of earnest parenting that we dream of, something that, on one hand, Luke Solomon agrees with: “They inspire me on a daily basis in everything I do, not just my job,” which all but sounds like the oncoming light at the end of the tunnel. Although he interjects a wry titbit: “They also annoy the shit out of me, you have that to look forward to.”

Something that rings all too true. When dealing with someone who has a basic grasp of English, you somehow forget that they lack a logic centre and a significant portion of life experience. It’s not uncommon to spend minutes asking a child to put something in the corner of a room before realising that they don’t actually know what a corner is, as are the delightful experiences when they decide that perhaps going to the toilet was something that should have taken priority over becoming engrossed in an iPad. Indeed, as children progress from malleable mounds of DNA, the efforts in looking after them layer rather than lessen: “Every single day is a challenge, both great and hard,” agrees Luke, “it’s a lesson in child psychology and how to be a good person and parent. All you do helps shape their future.”

Undoubtedly, the environment you create helps mould the growth of your children. In-between bouts of Minecraft, my inherited eldest jabs away at a Novation Launchpad app and a variety of random iOS synths while I sit on the side-lines and watch much loved parts of my life melt together in harmony. Something that Joseph Keevill has experienced as his son has grown older: “He loves my studio, he can jam for ages on my machines,” says Joseph, musing about the ghost producing potential of his little feller.

Making steps into the musical world is also something that has been happening in the household of Luke Solomon. Specifically when speaking about picking up the baton of DJing: “My youngest shows a greater interest and I have been teaching him bits and bobs, he gets the concept,” which then stretches into a grander appreciation of music as a whole: “Both boys learn the piano and are in the choir through choice. Also my oldest plays clarinet, again through choice. I have never forced anything on them and they have just grown up with it as part of their lives,” something that he wanted to foster based on his own childhood experiences: “I was never encouraged to explore music, due to family circumstance I guess, but art was a big thing in my family… families. I kind of fell into it, although I wish that I had learnt instruments as a kid. I want to give the boys that opportunity.”

Like for everyone else, managing the demands of the career and of the children never goes away: “Being away a lot at the weekend is hard,” he says, “I have made the decision not to do that so much now they are at school. Being passing ships is no fun as a Dad, you miss all the good stuff.”

As those time pressures remain steadfast, the rewards being to grow in magnitude. You see your children absorb your influence and you in turn begin to draw inspiration from them. Any follower of Luke on social media will know of his playful enthusiasm and love of the ‘ninjas’ are one of three common themes, the others being repeated disdain at people mistaking him for DiYnamic’s Solomun and hats.

Apart from heading up labels such as Acid, Music For Freaks and Classic, 2012’s vinyl only offshoot Little Creatures is a rather obvious inspiration. When asked, this is something he backs up: “My youngest son has cerebral palsy,” he says, “that has taught me to realise how fortunate we are compared to those with serious disabilities. It has also made me realise that through children’s eyes, nothing is impossible. It’s only adults that cast doubt.”

Running with the theme of inspiration, our final piece later in the week looks at what your children can inspire you to do. Thanks to Saytek, who will be issuing a third part of his Live On Cubism series later this year – the existing entries being for download here, and to Luke Solomon, who is embarking on a series of vibrant singles – starting with next month’s Stop The Riot, on Classic. May your precious valuables remain unbroken.