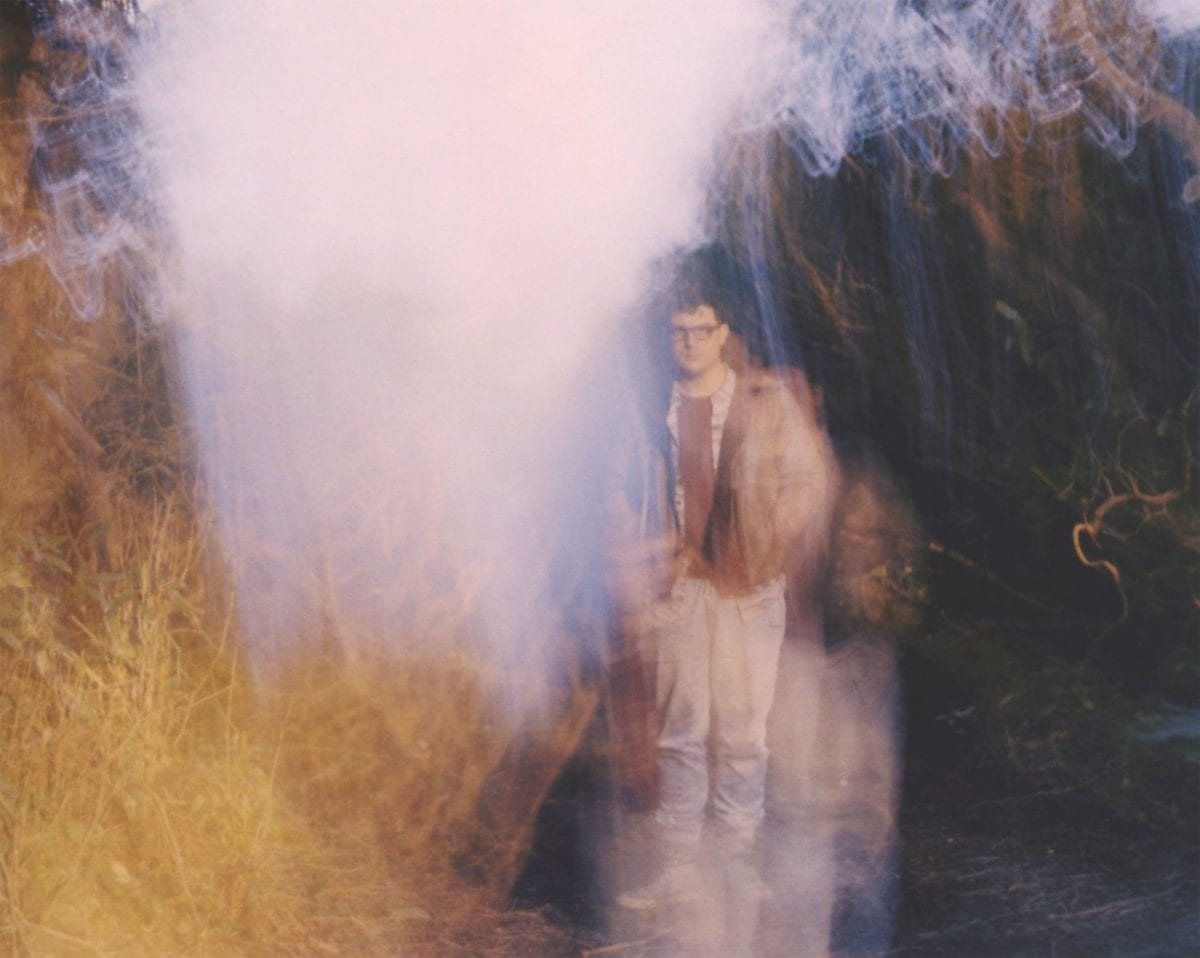 We’ve been fans of Luke Abbott’s warm and effervescent analogue arrangements for a while now. In 2010 we spoke to him about his top modular synths. We also invited him to play live in London at our events in 2012 and 2013 at The Waiting Room and Elektrowerkz. When we heard about his new album ‘Wysing Forest‘, we immediately jumped at the opportunity to speak to Luke about the makings of his most experimental album to date, as well as the six month in-house artist residency he attended in 2012 at the Wysing Arts Centre in Cambridge, which ultimately created the basis for his new album.

When did you first get involved with the Wysing Arts Centre in Cambridge?

I can’t remember exactly when they approached me about doing the residency, but it would have been sometime in 2012.  I was aware of them before that though because a few of my music making and art world friends around Norwich had done things there in the past.

Can you explain what the original brief was for the 6 week long in-house residency?

There wasn’t a brief, that’s the wrong word for it; there was a theme, but it was very open to interpretation.

There wasn’t any really direction given, just space. The people at Wysing are very keen to let people develop their ideas as freely as possible, I suppose they kind of choose some artists to work with and then just give them some help and support.

What was your interpretation of the theme, how did you originally envisage yourself using the space and surrounding environment as well as incorporating the various elements into your music?

The theme was ‘The Forest’, which really appealed to me because I’ve long been fascinated with the idea of forests. They have a kind of majesty and magic about them. I grew up quite close to a pine forest, and at this moment I live walking distance from a large woodland area, so trees have always been a feature in my life. I often go for walks in the woods when I need to think, it’s a good place to reflect.

I didn’t really have a plan as to exactly how I was going to interpret this theme, I had a few ideas about what I wanted to do, but mostly I just wanted to let something develop with a bit of distance away from where I was at that point, try to make a fresh start on some old ideas.

What provoked you to take this experiment and develop it into your new album?

I hadn’t made it thinking it would be an album, I didn’t even know if anyone would want to release it.  It’s a very personal record, I really made it just for myself. I make a lot of music, a lot more than actually gets released, and I actually had a whole other set of about 20 to 30 tracks I thought would become an album. But through talking about release plans with James and Gemma at Border Community, we all kind of decided that the Wysing recordings were the best and most complete body I’d done; the music just felt fresher and more enigmatic.

I don’t expect everyone to get it, it’s not the most accessible thing I’ve made. But I think it’s probably the most ambitious thing I’ve ever made.  I suppose it’s for the people who can get into that lost-in-space kind of vibe, people who have got a bit of patience and don’t need things simplifying for them.

Is the album made up of ideas and compositions created whilst at Wysing Arts Centre or is it composed of further works?

It’s all made up of recordings I made during my residency at Wysing, all except one gong in ‘Tree Spirit‘, which I added afterwards because I thought that section of the record needed a signpost.  Mostly all I have done is to edit some different takes together so that there is a flow between tracks, and some tracks are made up of two parts that were recorded separately, but not a lot.

I was limited in the editing by the fact that it had mostly been recorded as single take stereo files with a couple of the tracks also having room mic’s as well as stereo line recording (‘Amphis‘, ‘Free Migration‘ and part of ‘Tree Spirit’).  So those tracks are just mixed between the room and the line, but there was pretty much no mixing done other than that cos there was pretty much no multi-track recording to deal with.

This way of working was strategic though, as it was about capturing the moment, so I didn’t want to leave myself the possibility of changing very much. Most of it is first / only takes, so the recordings are like a document of activity.

Did you work / stay inside this wooden hut you shared a picture of on your website? Who else did you hang out with in the hut?

That wooden hut is called Amphis. It was built by two German artists; Folke Köbberling and Martin Kaltwasser.  But no, I didn’t stay in it, it’s bloody freezing in there in the winter.  I stayed in a farm house on the grounds and work in a small straw-bale barn across the field from the Amphis building. I go in there pretty much every day with a cup or coffee or something just to chill out, it’s a really cool space. I did a gig there last summer too, as part of the Wysing Arts Music Festival, that was a lot of fun.

How long have you been working on the album? Was it a stop-start process, or did you shut yourself away for a period of time to focus on it?

I don’t really know how I’m suppose to measure how long I’ve been working on something, all my ideas seem to continue and develop from one thing to the next, so where do you draw the line?  I don’t even feel like I’ve finished this album yet because right now I’m redeveloping it for gigs, making it something I can tour, and it’s still developing and changing.

If you had to compare your two albums, what would you say you’ve achieved with Wysing Forest?

It’s just a different thing in so many ways. My first album ‘Holkham Drones‘ was written from a totally different perspective.  This new album, the whole thing is an experiment, it’s grown out of a way of working and it’s ended up being something I couldn’t have planned.  I think there’s been some changes to my sonic aesthetics, if anything the new record sounds older than the old one.

Tell me about the album artwork designed by Jack Featherstone? Did you work together on it?

The photos for the album artwork were taken by my partner Katherine.  We went into the woods with our friend Paul and decorated a tree with holi powder; tree decoration, like something that might happen in some kind of forest prayer ritual.

I gave Jack the photos as a starting point for the album artwork and he took it from there.  There’s also some drawings on the inside of the record / CD which are scans from the notebook I had while I was at Wysing.  I usually keep a Moleskine notebook about my person.

Talk me through your selection of analogue hardware used to make the album?

There’s a lot of focus put on music technology at the moment, I’m starting to think it’s having a negative effect on people’s perception of music, electronic music specifically.  I think it’s important to say that the tools you use are not as important as the ideas you have.  So I’ve really gone off answering questions about synths because I think that all it does is shift the focus onto the less interesting side of what music is about.

For your live shows, will you be incorporating visuals? If so, will they be provided by Dan Tombs or Jack Featherstone? What can people expect?

I don’t have any plans for visuals at the moment.  I’m more into doing small intimate gigs where you can see what’s happening on the table, or just listen or whatever.  Visuals in clubs can often feel like you’re watching TV, I’ve always preferred light shows, lasers and smoke machines, that kind of stuff.  Ideally I’d have a liquid light show in the vein of Jefferson Airplane / Pink Floyd, but it would be a luxury.  And also I don’t know anyone who’s doing that kind of thing.

Following news that fellow label mate Nathan Fake has set up Cambria, do you envision opening up your own imprint?

I’ve got no plans to, but I suppose it could happen some day.  I’d probably want to do a tape cassette label though, I’ve been buying a lot more tapes than vinyl recently.

Also, can we expect more EP’s from you on NOTOWN?

I don’t have any plans to release another Notown EP, but never say never.

Wysing Forest is released on 23rd June 2014 on Border Community. Order a copy from Bleep, iTunes or Amazon.