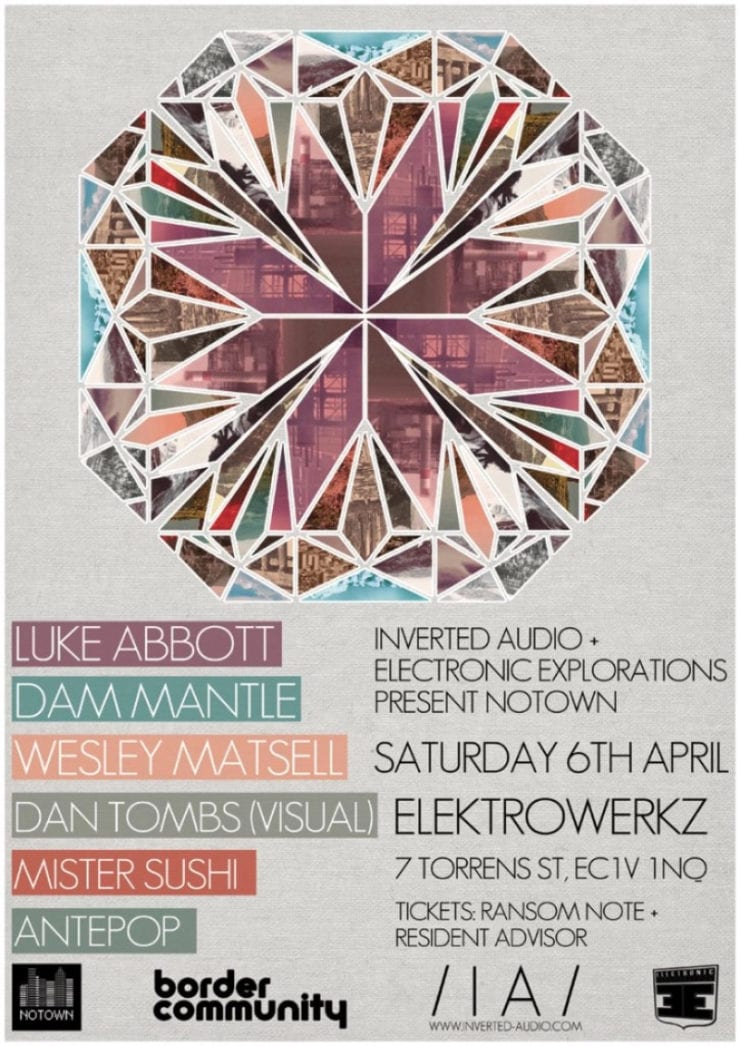 Following our weekend take over at The Waiting Room for Ulrich Schnauss’s ‘A Long Way To Fall’ album launch, Inverted Audio and Electronic Explorations collaborate again to present a NOTOWN Records label showcase at Elektrowerkz in Angel, London on Saturday 6th April 2013.

*All Visuals by Dan Tombs

>>VIEW PHOTOS OF THIS EVENT

With a heavy leaning towards other worldly strands of techno and house, self-styled ambassador of art school electronica Luke Abbott made waves with his Border Community debut album ‘Holkham Drones’ in 2011. Strengthening his credentials last year with two EP releases ‘Modern Driveway’ and ‘Object Is A Navigator’ on NOTOWN Records, the former of which found proud place on the likes of The Wire and Time Out stereos.

As much at home on stage as in the studio, on April 6th Luke Abbott will perform a live audio-visual show alongside video artist Dan Tombs.

Over the past three years Glaswegian producer Dam Mantle has refined his distinctive approach to ambient electronica, jazz and hip hop by effortlessly blending the nostalgic warmth of J Dilla and the skittish eclecticism of Daedalus and Debruit with a brooding, noir sensibility.

When not recording and performing his own work, Dam Mantle has crafted inimitable and frequently astonishing remixes for labels such as Warp Records, Ninja Tune, Planet Mu, Ghostly International and a wide variety of other artists.

Since releasing his second album ‘Brother Fowl’ on NOTOWN, Dam Mantle has toured both the US and Europe with his ally Gold Panda. On 6th April Dam Mantle will perform live alongside video artist Dan Tombs.

Dan Tombs’ video explorations have led him to become an integral component in experiencing the music of Luke Abbott, Jon Hopkins, Walls and Factory Floor.

Recently he has delved in the media of radio, hosting a monthly show ‘Synthesize’ on Radio Cómeme, exploring his passion for the synthesizer and it’s journey down the futuristic highway of electronic music.