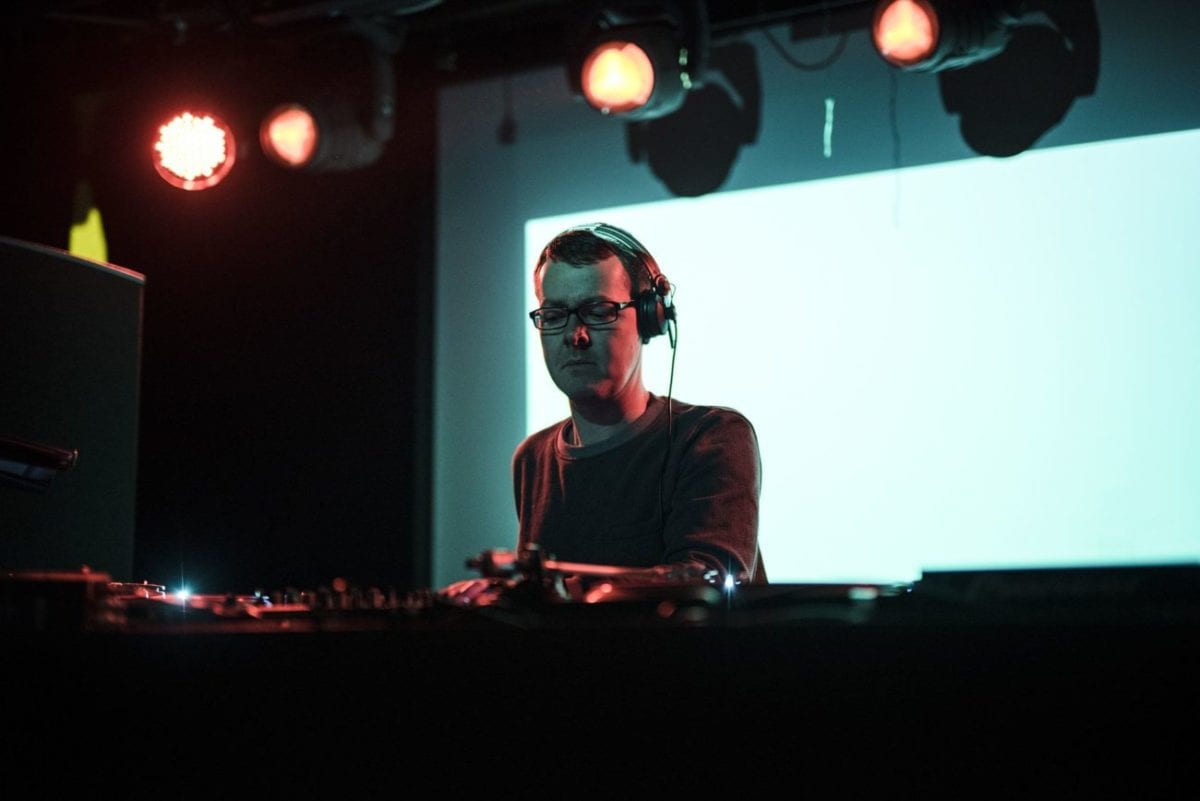 Ahead of Make Me’s party at Corsica Studios on Saturday 20th February with DJ Bone, Pearson Sound, Jane Fitz and Nick Craddock, we caught up with the Gateway To Zen co-founder to pick his brain about his journey into electronic music, becoming a respected DJ and the coining of the South London club night Gateway To Zen. He also selected 10 tracks for a meditative mixtape featuring Steve Reich, John Beltran, Alvin Aronson, GAS, Vril and more.

Please tell us about your track selection for the mixtape – What do these tracks mean to you, when did you first discover them and how did you come across them?

It’s a mix of absolute all-time favourites and more recent music that I really like, but they’re all tracks which I think carry real atmospheric or emotional weight.

Whether it’s lush, heartstrings kind of stuff or just being super, super deep, it’s all music that I find really engaging. It’s not really a clubby selection, even though I do play these tracks occasionally, but I think they are quite well-suited for more meditative listening.

Tell me about your first steps into discovering and exploring electronic music, the labels you looked up to, the artists and albums that helped shape your musical taste and the people, friends or colleagues that have helped pave the way?

That’s a big question. A long story. It would be great to do a Daft Punk ‘Teachers’-style shout-out track one day. Actually, quite a lot of the people they namecheck would feature in mine too.

The internet was very young when I got into things, so the channels were fewer. You went to clubs, you hung out in record shops, you listened to the radio. But this is a mixtape feature, and mixtapes were incredibly important to me in honing my tastes and laying a foundation of knowledge.

How do you discover new music these days?

I spend a fair bit of time browsing new releases at online record shops – I prefer physical record shops for secondhand stuff, then for digital I’ll check Hardwax and then also Bandcamp.

The latter I find really good for discovering new artists and labels. I don’t tend to spend that long doing the whole Discogs / YouTube trawl thing any more, but every once in a while I’ll go down the wormhole.

Listening to online radio is also really good for hearing new, great music, but I feel a bit of a cheat for cribbing that stuff so I try and keep quite ‘heads down’ about it. I’ve always been a bit like that, for better or worse. I like to do my own thing.

There are a couple of friends who I have a “have you heard this?” back and forth with but I don’t chat music with people all that much. 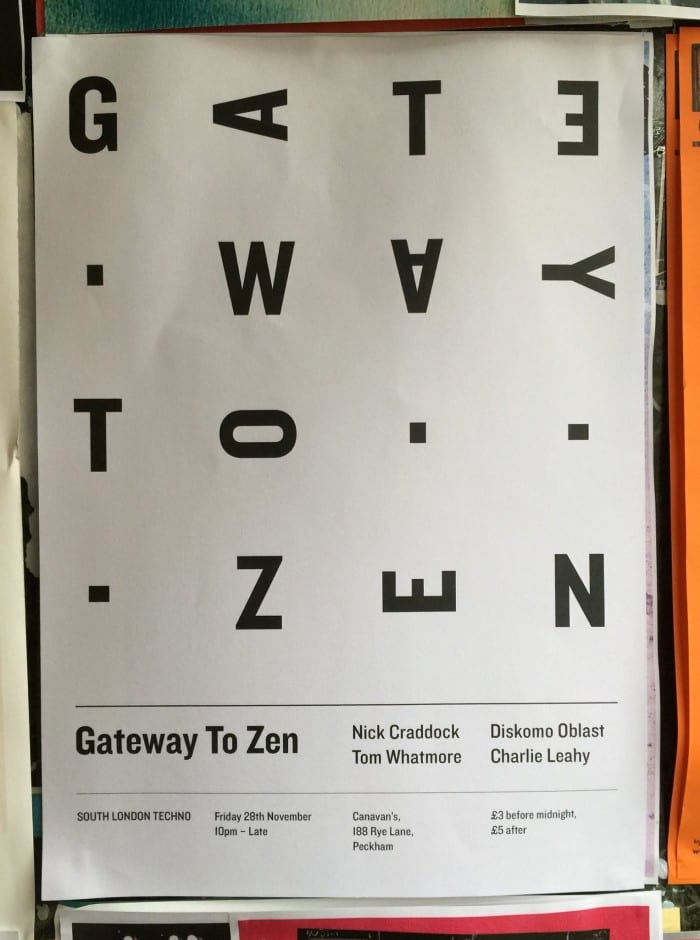 Gateway To Zen is a collective of friends hosting techno focussed events in South London. Tell me about the coining of GTZ, the crew behind the collective and what provoked you to start it up?

The guys from GTZ are people who’d I’d go clubbing with a lot, and we had similar ideas about what was good and what was crap about club nights – what we’d do differently and what was missing.

There was one particular occasion at my house where this all came into focus and we had the idea that we should have a crack at putting it into practise. It was quite idealistic, but I think we all felt quite confident in those ideals.

It came together reasonably organically after that. Albeit with quite a lot of discussion. The name was remarkably easy to decide upon – it just came to me and we all liked it. ‘Gateway To Zen’ is the name of a Jeff Mills track.

I liked that it sounded quite grand and mysterious but not very traditionally techno, and it has a sort of cosmic feel which is a complete red herring, which I liked.

Is there a plan behind GTZ? What do you hope to achieve with it?

Not really a plan, but we try and stay true to the original ideals. We were keen to do a techno night that was inclusive and quite grassroots and intimate and one of the things that we discussed a lot at the start was that a lot of nights seem hung-up on booking name guests because they think that’s what draws people to your party, but we felt strongly that we could present something that was good without having to resort to that, and try and keep it quite simple – good music, decent space, sound, nice people = great atmosphere.

I think if you provide that, it’s far more important than booking a big name. It’s about cultivating something. I should say that we do book guests, but I don’t think that it’s the crux of our parties. We can do unannounced things or book people who haven’t got particularly massive profile but who we know will rock it, and people will still turn up, which is pretty much all I could have hoped for, personally.

We’re at a point where we have some interesting options for the future, but I think our ethos will remain close to what it was.

This weekend you were in Ireland playing at an event – tell me about your journey into becoming an ‘Underrated DJ (according to FACT)’ and how you progressed from a bedroom DJ to being represented by a bookings agency?

I feel like it’s about catching the tide and staying on the wave, if you’ll excuse the crap surfing analogy. I’ve DJed for quite a long time, and had success at various points, but things came together a few years ago to give me some elevated attention.

I don’t really feel like I’ve changed my approach that much. I’m still working my way up, but I’m lucky to be quite busy with it at the moment. Hopefully I’ll get to travel more and play to some more nice crowds. 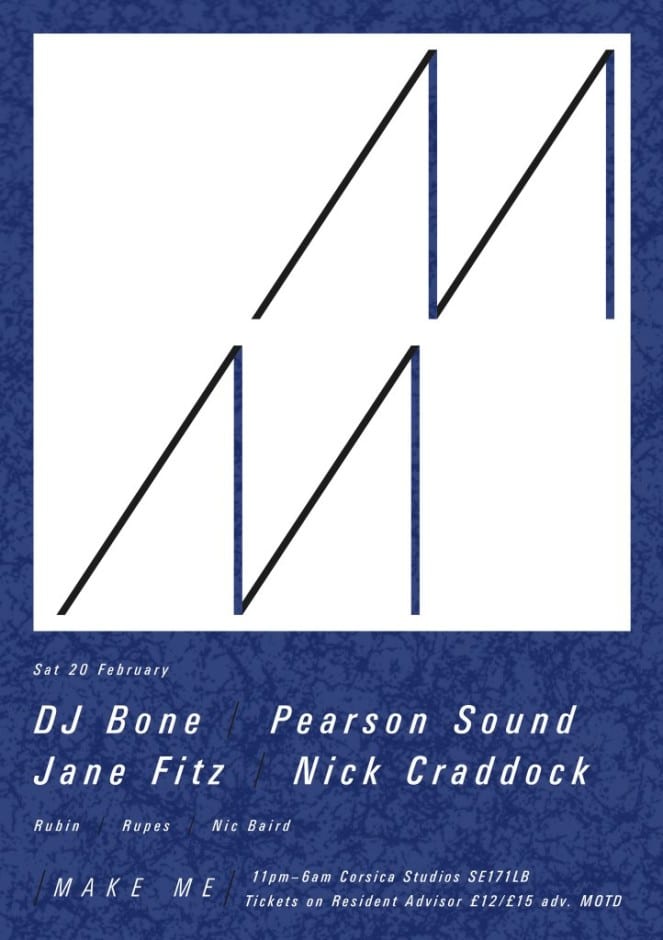 You’re next playing at Corsica Studios for our friends ‘Make Me’ on Feb 20th alongside DJ Bone, Pearson Sound, Jane Fitz – An eclectic lineup! Tell me about how you prepare for a set and if you have a particular routine before playing?

It’s a great line-up! All people who I feel a connection with, musically and personally. I treat every set differently, in terms of the music that I take, so it’s really just a case of pulling music that I think will work, being conscious of where I may start and end up, and then leaving enough room to try and go a few places in between. It’s not too pre-determined beyond that. No pre-gig rituals!

Finally what are you most looking forward to this month / quarter / year?

We’ve got Bloc coming up with GTZ which should be a riot, and some solo gigs I’m looking forward to. I’m starting a new monthly radio show on KMAH at the end of Feb, which I’m enjoying planning for.

Then really just seeing what falls into place for the Summer and beyond. Feels like it’s going to be a good one.