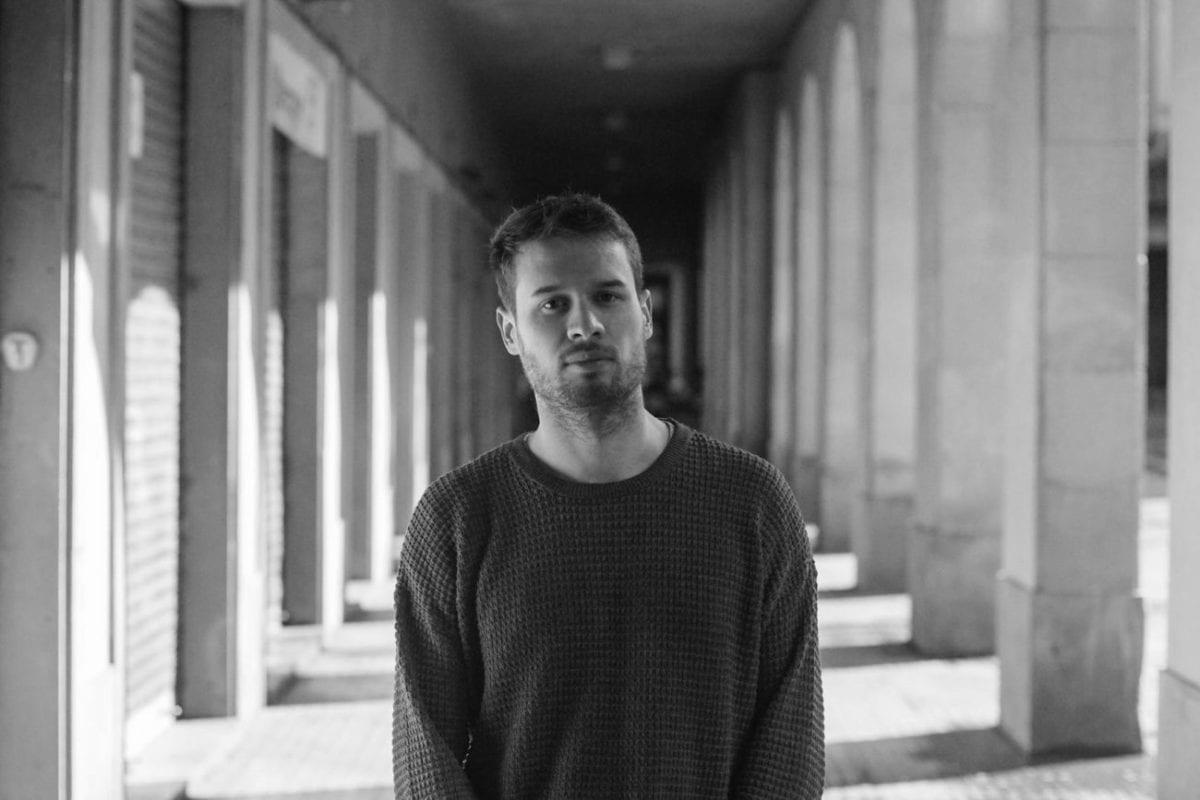 Rob Clouth was someone that everyone kept an ear on a few years back. Two killer EPs on Berlin’s Leisure System label and a sound that was uniquely his own, the Barcelona-based artist all but vanished up until recently with the announcement of his tantalising ‘Transition‘ EP on Max Cooper’s Mesh imprint.

In this feature Rob Clouth opens up with an online algorithmic summary of his musical output since 2003, baring his inner creativity for the masses. Between putting out his latest material and shedding the layers of his near-fifteen year output, he found time to chat with Inverted Audio, whilst delivering a sensational mix for our sister mix series Newtype Rhythms. 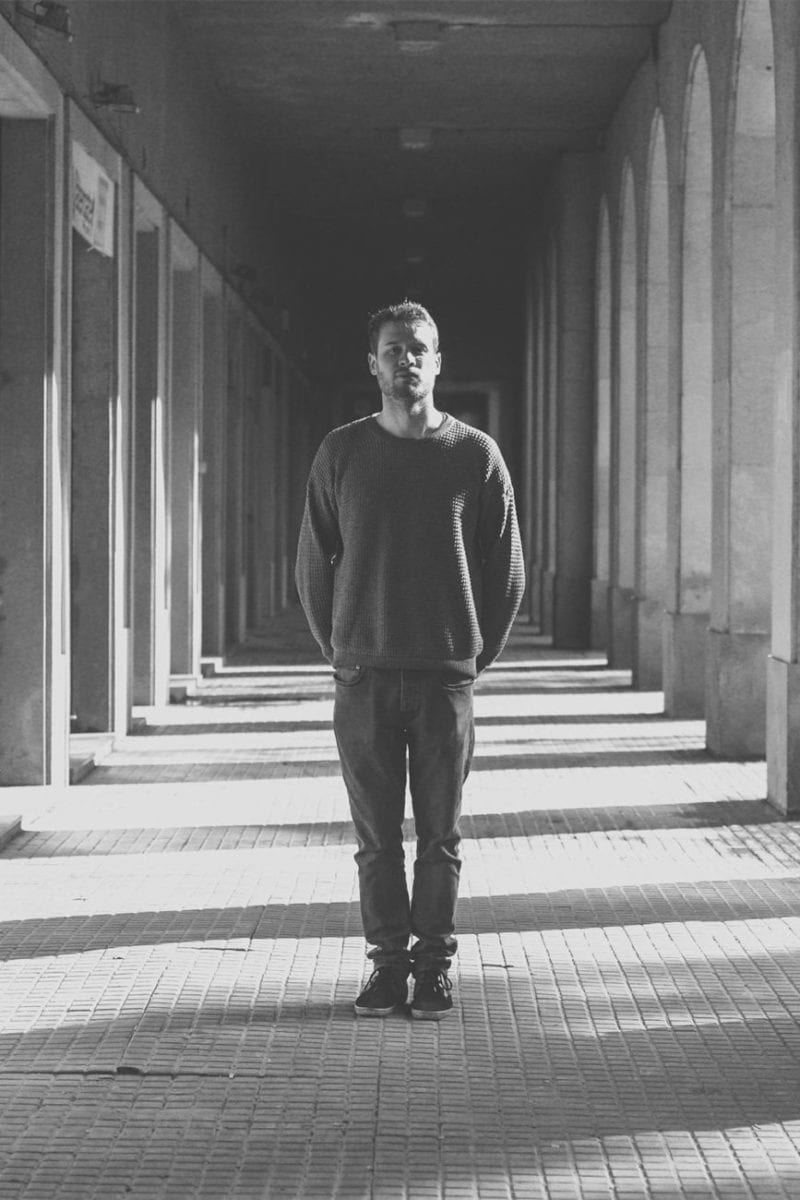 Congratulations on your new EP – it’s a stirring return to a world that you singularly invite listeners to experience time and time again. It has been some time since we’d last heard from you. Can you tell us what you’ve been up to since your previous release up until now?

Thank you! Well, I actually have been focusing a lot on other not-strictly-musical projects – software mostly – I’ve made a couple of apps. I spent about a year making a synthesis app for a now-dead company.

I was a bit upset that it didn’t go anywhere but I learned a lot; a lot about writing apps, synthesis algorithms…and how not to run a business, all of which will at some point be useful in the future.

In fact, I’m already using the synthesis skills I picked up there in other projects; and eventually I’d like to start a business, so there we go.

Hmm…what else. I’ve been doing some sound design for some installations with Kyle McDonald. I’ve been making some music obviously and have started on an album! I’m doing that full-time now. I’ve been making a bunch of tools to make the album with.

The funnest one by far is the RECONSTRUCTOR (shit name). It’s an algorithm that automatically slices up any sound file, and figures out the best way to rearrange and overlay the pieces so that it sounds like another sound. It’s like an audio version of the deep-learning powered style transfer algorithms.

I’m gonna be using it in the album to reconstruct my beatboxing (which I suck at) with real, designed, high quality sounds. That way you can get the flow and seamless transitions of beatboxing, but with actually good, non-human sounds. 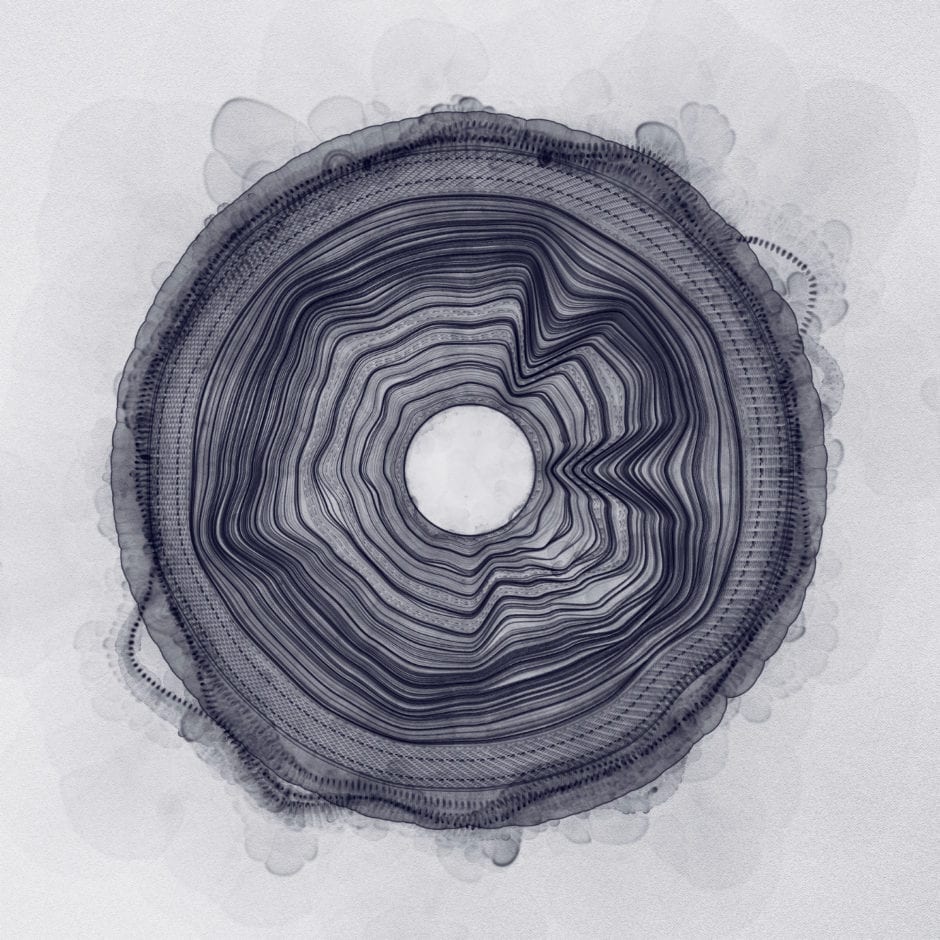 Transition will coincide with the release on an online algorithmic summary of your entire musical output from 2003 up until now – why did you feel it was important to share this with people who are willing to dive into the deep?

It was for a couple of reasons; the reason why I started it wasn’t the reason I finished it though. As an artist, I feel like one of the biggest sources of creative drive is the fear that I’m stagnating. I see it happen to so many artists. I absolutely adore their sound and their approach to music but then after several albums they all sound the same and I lose interest. I really don’t want that to happen to me, I feel like I need to keep evolving in some way, even if it’s a small change.

Recently, I have begun to think that I am stagnating: copying myself, over and over again. I’m using the same tools I have for years, the same sounds even. Be it a melody I wrote a decade ago, or a drum loop I made before that. I needed a big change.

I thought the best way to force me to change would be to release everything I’ve ever made – all project files, all samples and all tracks into the public domain. That way I’d be forced to move on whilst simultaneously giving back to the community that has given me so much help and inspiration in the past. Great idea right?

I proposed this to the label and they basically said “no fucking way” – using much nicer words obviously. And I’m glad they did. It could have been career suicide. First of all I would have pissed off all the labels that I’d ever released music with that still wanted to sell copies.

Secondly, it would remove any possibility of ever releasing old material. Thirdly, because people would have the project files and unlimited freedom to do whatever they wanted, there might have been musicians popping with a very similar sound to mine, which for me would be a great push to innovate and do new stuff – but for a label it would be bad business.

I’m not at the stage where I can sacrifice income. It be would be deeply unfair to previous labels and my current one that have supported me so much; especially Max Cooper and his label Mesh. He has been so supportive, it’s insane. So no, that wasn’t gonna happen. I’m not a millionaire mega-star who can do that kind of thing. 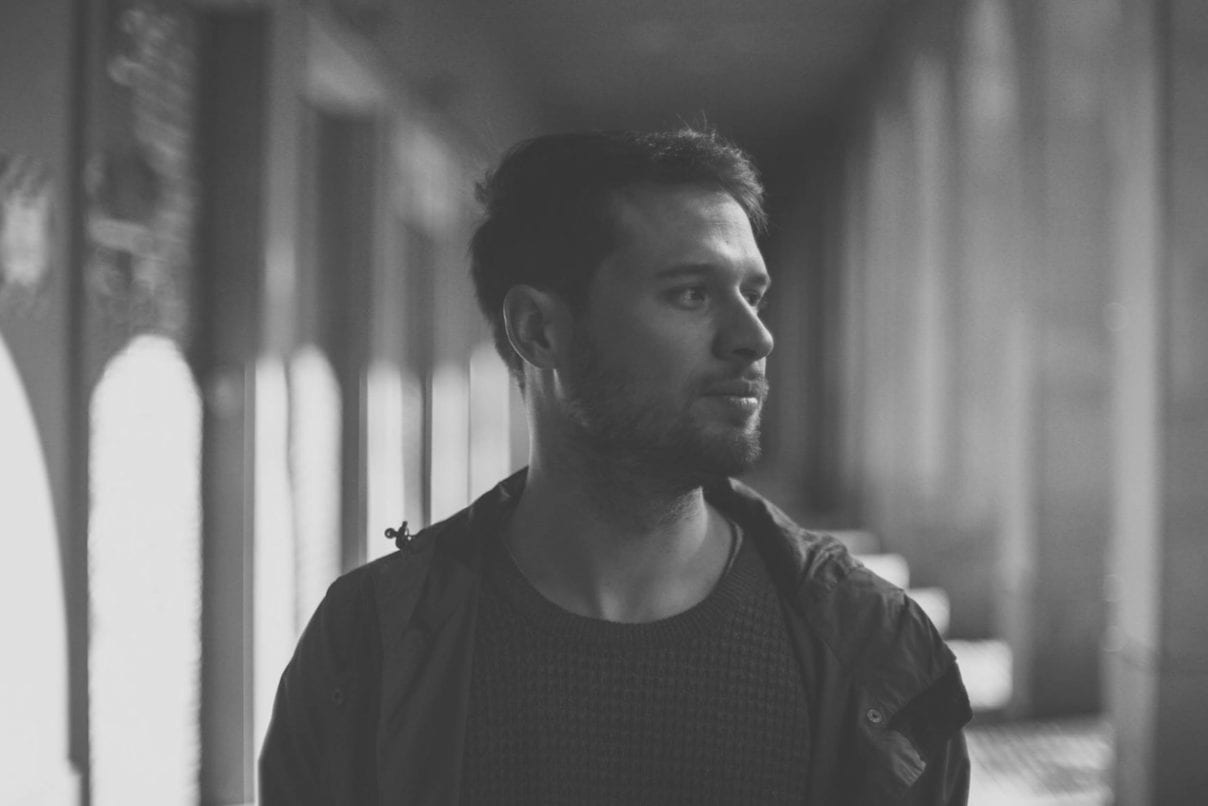 I thought about other ways I could ‘release’ all the old stuff without actually releasing it. In my musings, I remembered a project I did years ago that would take a little slice of audio from each sound on my computer and stitch them together to form a continuous sound. I thought it would be interesting to run that algorithm on my entire musical output ever and see how it sounds.

It sounded great; but to do it meant going through all my old stuff, all the shitty first tracks and experiments, all the half-finished but promising ideas. I started to wonder if there was a way to analyse all the tracks to show how my style had changed over time. I thought that by looking at that progression, I could extrapolate the trend to inform future directions I could take with my music.

Since I’d studied music analysis in my Masters course, it wasn’t too hard to write a script that would go through all the tracks and analyse them to extract the key, chord sequences, tempo, etc.

Another interest of mine is data-visualisation. In fact the artwork for my previous release ‘Hidden Structures‘ was also a data-visualisation of the whole EP. For the ‘Transition‘ EP and algorithmic summary I was trying and failing to find an interesting way of visually presenting the progression of the data over time, and suddenly growth rings in trees came to mind.

Growth rings are the rings you see inside a cut-down tree trunk. They are used by scientists to firstly know the age of the tree by counting the rings, but also the distances between the rings and their colours tell them the conditions that tree was growing in that year.

So the final artwork for the ‘Transition‘ EP and the interactive website summary thing are based on growth rings. I’m pleased with it. I’m not sure if I really learned much about my music though. Apart from that I really didn’t like the note G# at the start, and now I use much more bass and less mids. Also there’s more variation in dynamics in my newer work, and I change chords slower. But any deep insights into my soul? Nope. Looks cool though!

Do you feel like since your latest release that your perception of the industry has changed — and has that affected in any which way how you choose to approach, create and present music moving forward?

I really don’t involve myself in the industry much to be honest, for better or for worse. One trend that I’m not super-keen on however is that people don’t listen to full releases so much anymore. Everything is playlists or radio, caused in part by the popularity of streaming services with recommendation features and the like, which is great for hearing new stuff and for that I love it. However, it means the idea of an album is slowly dissolving I think; but that isn’t a new trend I suppose.

To counter this trend, every few months my friends and I have a music listening session where we listen to a new album that none of us have heard before, from start to finish, in silence. No talking until after it’s finished. I love it!

I reminds me how compelling an extended release of music can be if done right. The progression of the tracks throughout the album, how they each reference each other in some way, the shared themes. All of that is lost if you listen to track on it’s own, outside of the album. It’s like reading just a single chapter from an entire book. It might be a great chapter but you lose the context. 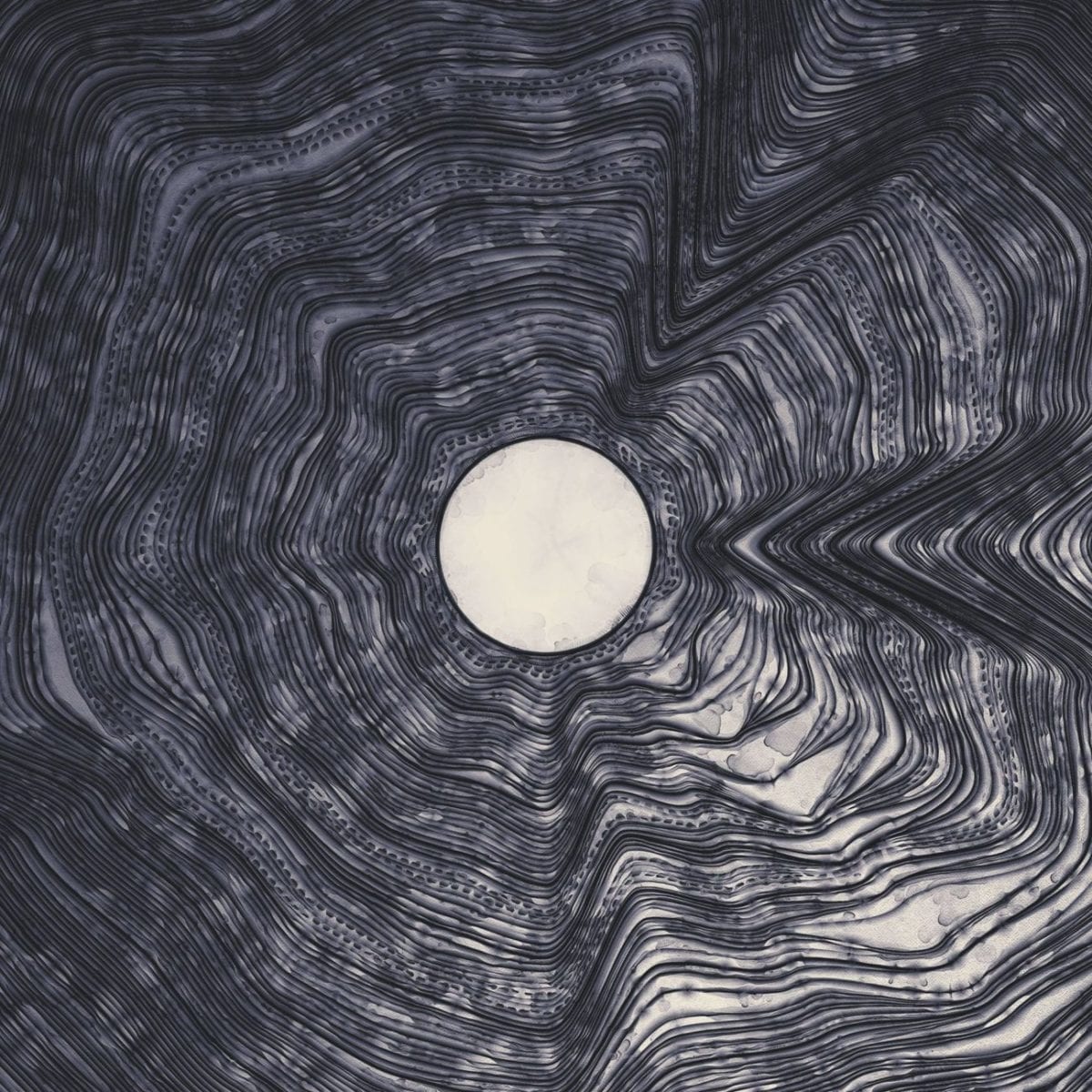 With ‘Transition’ you struck a tone that is somewhat familiar from your previous work, yet comes out in droves on this one – emotional expansiveness. What was the mindset going into creating these tracks versus the last release; were there any specific changes that you made upon crafting these tunes?

Transition is actually a release that represents the end of something, not the beginning. Some of the tracks I started years ago in some way or another. I wanted to tie up loose ends before moving on.

For that reason, some of the tracks have quite apparent old/new sections. They’re Frankenstein monsters of parts glued together from across the last decade. I’m pleased with how they came out though. I put more effort into creating more space (in some of them at least), having things evolve slower, not having a trillion things happening at the same time.

I think I succeeded with the title track at least. That one is the newest, and probably the most representative of where I’ll go next. That track ends the EP and will act as a bridge into the album. Since the theme of the album is noise, chaos and randomness, the EP ends with pure noise because that’s how the album will start. The album will be using a new DAW, a new workflow and new tools, so this EP was to say goodbye to the old and welcome the new.

Tell us about this mix you’ve made for Newtype Rhythms.

The mix is basically stuff I like, smashed together into some mutant monster, begging to be put out of its misery. The challenge for me with mixes is that I don’t know enough music to have a consistent genre throughout, and also that the music I like ranges quite wildly in tempos and intensities. And obviously I have to fit it all in because it’s fun to try. So that’s why the mix starts with ambient and ends up with jungle!

I also like trying to mash-up wildly different songs. In this one I managed to kind of mix Dawn Of Midi and Addison Groove, which somehow works I think. It’s so satisfying when you find two tracks that have the same key (or similar enough to transpose) and they just slot together with very minor editing. That’s what happened with the Tipper track and A Winged Victory for the Sullen. I really, really like the mix of those two tracks.

The Paul Bowles spoken word piece is interesting. He reads his poems to ambient drones. He wrote the album that the piece is from “Baptism of Solitude” when he was in his 80s! He’s now dead, but his poetry is really interesting. Talking about his life, about the Sahara desert, about death, loneliness, his wife.

The mix is also peppered with excerpts from the Transition summary of all my work.

Finally, when are you going to release that Linkin Park “Papercut” remix?

*laughs* Maybe as a tribute to Chester Bennington, RIP.

Transition EP is out now, order a copy here.

Discover more about Rob Clouth and Mesh on Inverted Audio.