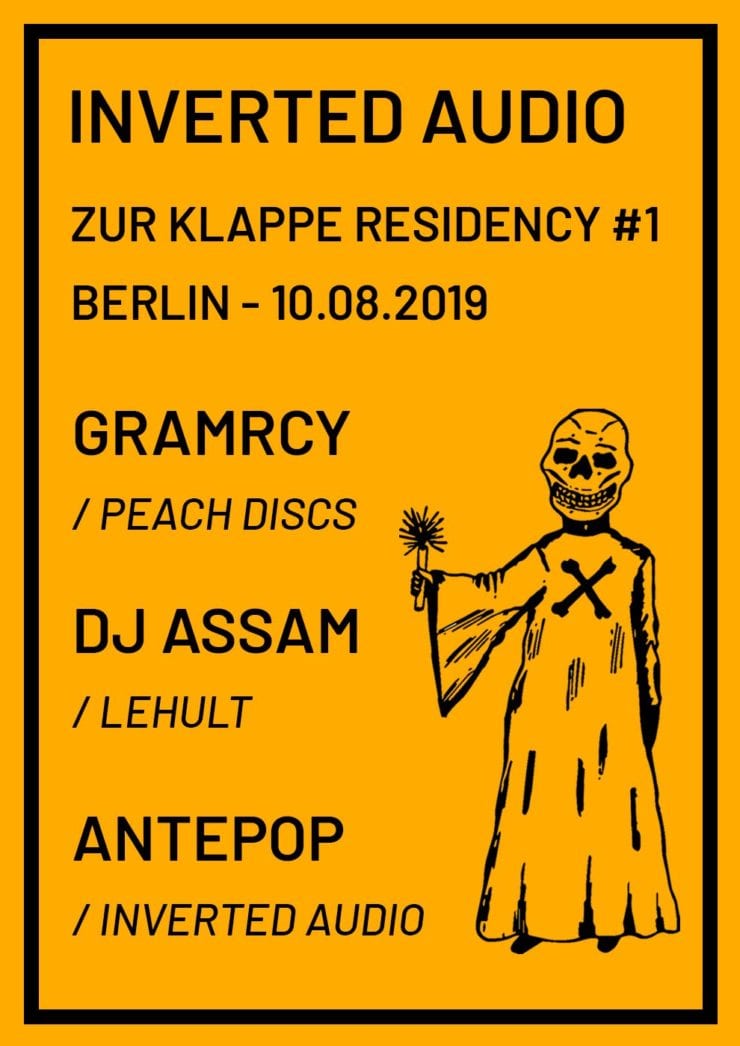 Saturday 10 August marks the beginning of a new monthly residency for Inverted Audio taking place at the intimate basement club of Zur Klappe in Berlin. For the occasion we’ve invited Peach Discs co-founder Gramrcy to lay down a potent blend of off-kilter electronics alongside the even deeper sounds of Lehult Records co-founder DJ Assam, plus support from our eagle eyed vinyl slinger Antepop.

Gramrcy is a British-born DJ and producer living in Berlin. His productions draw influence from the UK’s rich rave history, whilst also pushing a resolutely forward-facing sound. With previous releases on Ancient Monarchy and Charles Drakeford’s experimental imprint FTD – Gramrcy has established an anything-goes approach to music-making and his DJ sets bring together a fluid and stylistically diverse selection that skilfully weaves between genres and eras.

DJ Assam is the alias of Hamburg via Berlin based producer Joe Davies. He is co-founder of Lehult, a close knit deep house imprint that has released music from the likes of Liem, Lucky Charmz and Tony Rainwater. Earlier this year, he released a stunning four-tracker ‘Bring Back The Waves’  EP via Down By The Lake, a sub-label operated by Julius Steinhoff of Smallville Records.

Closing out the proceedings is our very own founder and editor-in-chief Antepop. Having recently played a full-throttle techno set for Beau Wanzer at Zur Klappe in June, plus an equally dynamic set ahead of Kassem Mosse at our 10 Year Anniversary there’s no limit to the scope of Antepop’s selection.