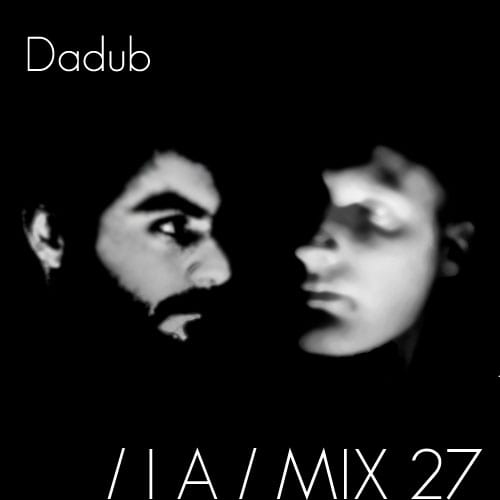 Dadub is an electronic music duo formed by Daniele Antezza and Giovanni Conti. They are focused on the production of electronic music that fuses together ambient, dub and techno. They are also responsible for the mastering, production and engineering for every release on Lucy’s fledgeling imprint Stroboscopic Artefacts.

It’s no secret that we’re hooked on SA’s relentlessly rhythmic and atmospheric techno. It’s these qualities that have gained the imprint so much attention over the past year and is without doubt the result of a lot of hard work and determination from Lucy and Dadub to differ themselves from all other techno labels in the industry.

We are exceptionally proud to offer you this stunning mix by Dadub. Their mix features tracks from the hard hitting world of techno, Marcel Dettmann, Xhin and Pfirter, to the furious kick drums of UK bass, Blawan, Peverelist, Randomer and Kode 9, whilst also taking in the ambient sounds of Raster Noton’s Aoki Takamasa, Ryuichi Sakamoto and Alva Noto. We hope you enjoy it.

Please can you both introduce yourselves and tell us where you’re from and what you’re currently up to?

We’re two guys from Italy: Giovanni was born in a small town near Pisa called Pontedera. It’s a small industrial shit hole in the middle of the Tuscan countryside, most famous for being the home of the world famous Vespa motorbike factory. Daniele comes from Matera in southern Italy, it’s a really beautiful but boring town.

We’ve been living in Berlin for some years now. We spend the majority of our days secluded in our studio, working as mastering engineers for Stroboscopic Artefacts, Parquet Recordings and a whole host of other electronic imprints from all over the world.

We’re having a great time traveling around playing gigs as Dadub. So far this year we’ve been to Wuppertal, London, Moscow and we just came back from Sonar in Barcelona. We’re now preparing our next live gig at Melt festival near Leipzig. We’re also finishing our next release for Stroboscopic Artefacts, coming out in august as part of the Monad series.

When did you guys first meet and when did you start experimenting with electronic music together?

We met in Berlin about two years ago, despite the fact we studied in the same city in Italy, Siena. Giovanni was working as a multimedia designer in Italy, however the head of the company stole the software that he made. Giovanni got into contact with me asking for help to reverse engineer the software. I then met a friend of Giovanni’s by chance, who explained the story whole story to me, when I came to Berlin I contacted Giovanni. We met up and immediately felt we had a em connection about music and a shared interest in our approach to sound, so we decided to rent a studio together and start experimenting.

What’s your musical background? Has it always been dark, intense, industrial techno or have you dabbled in other genres and types of music, and if so, what?

Giovanni: I was a drummer for around 8 years. I started making electronic music about ten years ago. When I lived in Italy I used to be a jungle DJ and had a small and short lived project with two other guys. This got me interested in performing live sets rather than just DJing.

Daniele: I was also a drummer and percussionist for several years, I started to produce electronic music 6 years ago. So far in my life I’ve been emly influenced by black music, mostly jazz and reggae. Techno has only recently started to influence me.

Berlin has played an important role for the both of us. The city has introduced us to different sounds and atmospheres that we are now introducing into our productions.

What’s the story behind the name ‘Dadub’ does it have some kind of deep philosophical meaning behind it?

There’s no philosophical meaning behind “Dadub”, it’s only a funny play on words.

You’re also involved with the production and mastering of the Stroboscopic Artefact artists. What’s the story behind Artefacts Mastering Studio, how did it come to fruition and what’s your philosophy on sound?

It happened almost by chance. Lucy AKA Luca Mortellaro needed a quick re-master for a track he had to release, he wasn’t happy with what the previous mastering engineer had done, so we did it and he loved the result. He then hired us to engineer all future releases on Stroboscopic Artefacts. Admittedly we were really surprised because even though we had years of experience in electronic music production, we’d never attempted mastering.

Walter Ercolino from Meerestief then approached us, he spread our name to other label managers that he was in contact with. Things then started to gain pace and grow exponentially. Now that Stroboscopic Artefacts is recognized for its unique sound as being an innovative label, we’ve gained new clients who want a similar sound aesthetic and treatment for their tracks.

Of course we try to make every track as special as possible, without destroying the intention of the producer. We believe that techno tracks can be much more than just a straight kick drum accompanied by a straight hi-hat. This is what drives our mastering process.

What makes your methods of production and mastering different to every other ‘generalist’ mastering studios? Is there a special technique behind the SA sound?

We try to give importance to the elements surrounding the kick, which other mastering engineer wouldn’t do. We don’t have any special techniques, we just listen carefully to all the elements revolving around the kick and bring to the surface the atmosphere of the tracks. In our opinion these elements contain the essence and unique character that make the track stand out. These elements are a lot easier to pick up on rather than a flat techno track.

In our recent review of SA009 with Pfirter we proclaimed that Stroboscopic Artefacts is “the most vital imprint in contemporary techno.” What is it about the imprint its releases and philosophy do you think confirms this statement?

I guess it’s the result of the lucid and inspired work of Lucy and his approach to A&R. He knows what he wants to release and where the label is going: it started as an almost pure techno label but slowly began focusing on more experimental music.

Stroboscopic Artefacts is focused on keeping rhythmic drive as a common element within each track as well as originality and the ability to reinvent and go beyond the current standards set by the big techno labels. It’s a choice that requires courage, and the more you get recognition, the more you need courage to go beyond what made you famous and appreciated in the past. Everyone can make a label and sell tracks on internet, but only a few labels manage to stand out from the crowd. Being wild and innovative is the only way to survive in such a competitive and fast changing world.

What is it that drives you to create music? Do you have a specific musical direction / method when producing a track, or is it simply a case of arbitrary experimentalism?

We don’t have any fixed rules in place, except to not repeat ourselves and not follow the trend: it’s easy to listen and copy what’s big at the moment, and in the short term it can work out well for you, and you’re likely to receive some recognition from the press and public, but we’re not interested in this. We just want to bring the musical discourse forward, to contaminate and hybridize the musical forms we like to listen to, and to bring on the dance floor inspired sounds rather than the usual 909 samples and 303 bass lines. We follow what the sounds tell us and we shape the flow of the track according to our mood and aesthetic, trying not to sound cheesy or cheap.

We all have peers we take inspiration from, mine are Aphex Twin and DJ Koze. Who are yours and why?

One of the common points that made us start a project together was the love and respect we have for Rhythm and Sound, Basic Channel and Chain Reaction producers, Moritz Von Oswald and Mark Ernestus above all. We also can’t our appreciations for  Deadbeat and the musical approach of Robert Henke.

Regarding our “club influences”, Giovanni is quite a fan of Figure and CLR productions, I am more focused on dark atmospheric techno, but we have a wide musical background, spanning from hip-hop, dub, jungle, and whatever makes our heart beat faster. We’re also interested in the experimental side of electronic music: from IDM to isolationism, noise and ambient-drone.

I recently witnessed your performance at the Stroboscopic Artefacts showcase at Sonar by Night. Do you have any pre performance rituals and how do you think your set went down in Barcelona?

We try to keep focused and concentrated. We don’t have any rituals, except trying not to rehearse the live set too much. We like to leave some raw spontaneous random energy within our performances. At Sonar we had a difficult time performing, the stage monitors didn’t play back the kick drum and were left totally distorted. We had to play from memory, hearing the kick drum coming back to us after half a second after it had traveled a hundred meters, bounced off the back wall and then traveled back to our ears, it was tough!

However since we listened back to the recording and seeing the crowds reaction, I guess we didn’t do so bad as we had a lot of great feedback, but it’s a pity we couldn’t give it our best.

What does the future hold for you both? Do you have any solo ventures or further collaborations in line?

Don’t be afraid to break the conventions and don’t bow down to the commercial logics: music is not a tool to make money, but a tool to exchange energy and share the glimpses of timeless beauty which we’re lucky to get in contact with.