Georgia have a knack for bundling together what, on paper, seems like a very odd collection of musical styles. World, folk, meditative gong and ethnic styles melt together whilst somehow connecting the dots between sound design, cinematic soundtracks and improvised arrangement. No less can be said about the pairs’ podcast, which unconventionally drifts through styles, eras, tempos and moods. This isn’t one to get bopping to, it’s one to explore, research and immerse yourself in.

The US-based duo consists of multimedia and sound buddies Brian Close and Justin Tripp. The history between the two has been well documented, so we won’t go into that here. There are other key aspects to these two like the city itself, which constantly fuels their creativity, surrounded by cultures, religions and people of all descriptions. They are also fiercely prolific and have little interest in defining how people should write about them or their sound. They are both also philosophic, spiritual and not into the idea of self-censoring.

What continues to surprise and bamboozle though is the liquid and amorphous approach they have to sound design. Spirits of Sun Ra Arkestra, Miles Davis and the Autechre boys seem to be at odds with one another, but somehow all speak at once through Georgia’s productions. Just check out any previous releases for the likes of Meakusma, Firecracker or YOUTH and you’ll hear avant-garde jazz, trip-hop, witching hour trance and polyrhythmic tribal drums.

Asked in previous interviews how they instigate their projects, their process resists formulaic predilections and each album or piece of work is created from a new viewpoint, with an understanding of the aesthetic of the label or artists they are collaborating with. It could be testing out a new (or old) piece of kit, and from there, experiments and exchanges of ideas and sounds start to take place and a concept matures until finely tuned & edited. That improvised feel has been echoed in IA MIX 347, which freestyles and rapidly switches context across a mind-bending 2-hour trip.

No self-promo here and the mix features a glut of obscure artists from across the globe and depths of musical genres. Elysia Crampton, Chuquimia, Munyasya and Philippine Madrigal Singers line up next to George Lewis, Terrence Dixon and Copeland. They are also about to celebrate another release ‘State Effect (Accel)‘ on OOH-sounds, which promises to be yet another deep exploration into weirdness. Just like this mix. 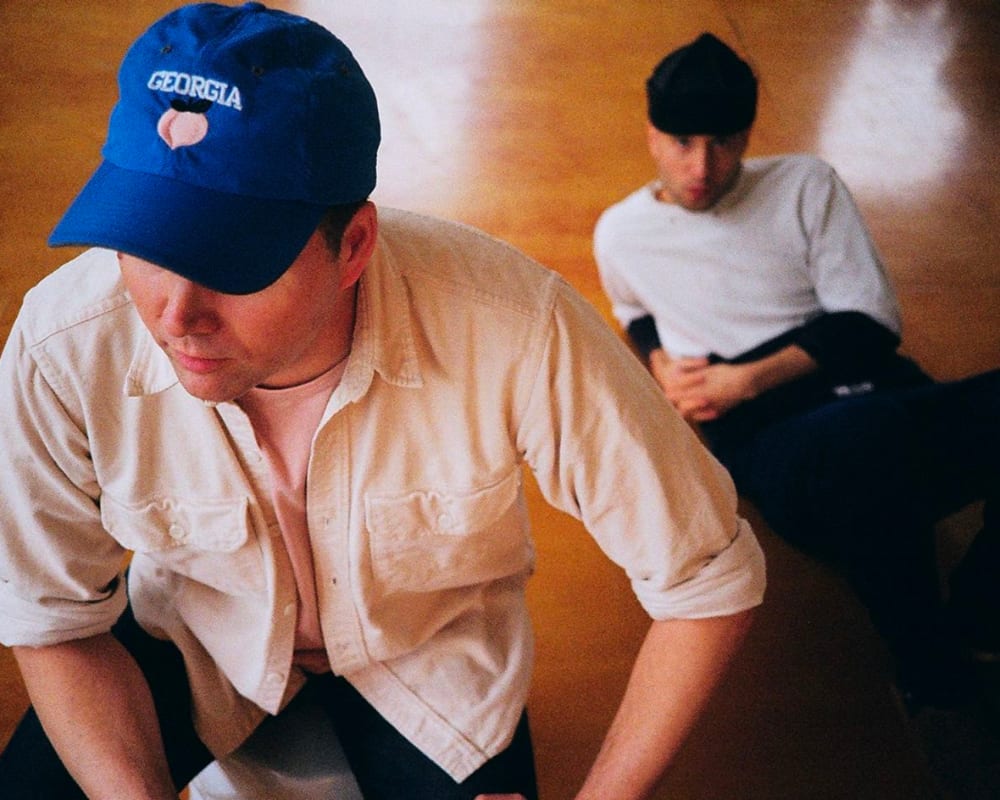 Hi Brian and Justin, first of all, big thanks for taking the time and answering our questions. At the time of responding to these questions, are you in Chinatown NYC or elsewhere in the US?

*Currently Online * We’ve both left NYC for the time being…

Please tell us about the mix you have recorded, the music featured in it, the atmosphere created and how you went about constructing it?

You guys are unbelievably prolific, putting out a staggering amount of esoteric music into the world. But we’re also struck by how cohesive your albums sound. We’re curious about what your creative process looks like and, additionally, how you then build out an album?

It’s a bit of impulse and spontaneity, but then really sitting with those moments and understanding them through carving a symbiotic harmony – everybody digging in their own dirt, looking for the sun opening and reporting sms pings back to HQ.

How important do you think it is for an album to have a conceptual basis or an undercurrent beyond just musical output?

Not important at all. There are great albums founded in a concept and similarly great without.

Do you identify that this album is a collection of random tracks or a specific body of music that was recorded within a certain time frame for a certain purpose?

Having released so much music on a wide variety of record labels, how did you come to release music through OOH-sounds? And how did your relationship with label founder Pardo begin?

Pardo of OOH asked us to record some music as part of a new series he was starting a few years ago. That came together well  in the form of ‘Decouple ][ Series‘, so when we finished recording ‘State Effect‘, he was one of the first people we sent it to. His immediate enthusiasm made us more than happy to work with him to bring this music out into the world.

I’m keen to hark back to your early beginnings and learn how the two of you initially met, what drew you to start experimenting and creating music together, and why you chose Georgia as your production name?

This has been pretty well-documented so I’ll keep it brief. Essentially, we wound up in a similar social circle. I (Justin) had a slight bit more history in music and Brian had been focusing more on visual work. He had played music his whole life and was eager to do a bit more and I was excited to help him with some of the visual work he was making. So we started working more on these things together.

The choice of Georgia was a non-choice, being that it simultaneously exists as many concepts and realities (physically bounded specifically), but of different regions on scale dimensions (country, state, mindset). It’s very similar to the idea of colour like lime, which everybody has different configurations about.

The name ‘Georgia’ was chosen quickly in a matter of seconds, like getting a tattoo before knowing what it means, and I think that’s the point of this project, the trance of it…filling in blanks with blanks.

Your new album ‘State Effect (Accel)’ is on the cusp of release, please can you explain the meaning behind the title and what the front cover artwork represents – the more I look at it the more intriguing it is.

One simple translation would be: “Hurry up and change your state (of being)”, but there’re endless others. Yes, Phasing initialised -> The cover was a series of drawings done in real-time while listening to the album playthrough, then mapped onto basic 3d surfaces and recomposed -> it is the trance that is part of the being. 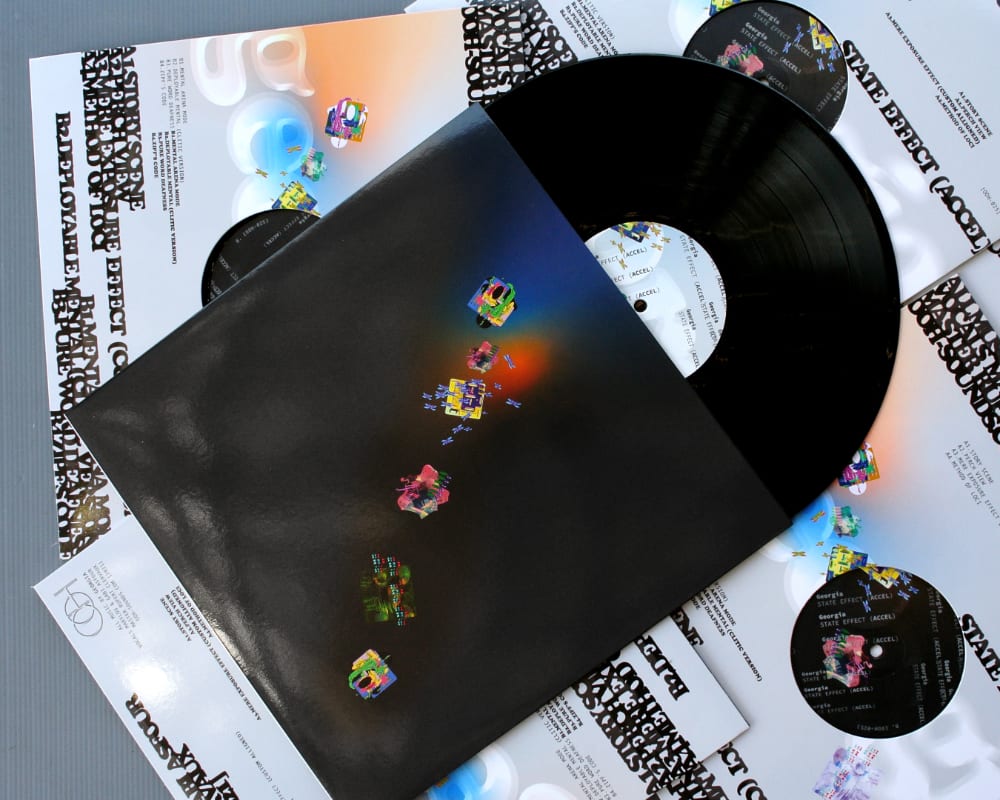 Tell us about some of the instruments and equipment used to write the album? Did you source any new instruments that you were eager to explore and create new sounds with?

The rhythmic foundation of the record was made on a specific modular system that Brian put together. 99 per cent organic waves, FM drums, hand drums, FM hand Drums, cyborg hand drums…. From there it went into layers of editing and arranging. We used a lot of new digital means (instruments/fx/generative tools) across the tracks. The elements that really stand out to us are the vocal recordings we had to work with from Marylou/Oiseau Danseur and Gabi Asfour.

I think a lot of this project is filling in gaps between clubs; between club moments, between clubhouses; to figure out where the sound can go and to harmonious morph into the ether – some of the most memorable club moments happen as a parenthetical quiet moment where the self fades away – the sound of being directly in the centre of the club vs the farthest point from it; these are all perches … thinking of a club like a sine wave… from the outside of the club to the direct centre of the floor, and then outside of the club. I think we were always most interested in the questionable stuff that felt unique and different, but also truthful and powerful, cathartic.

Your music also has a distinctly tribal feel. Pre-pandemic, did you actively venture to different countries and cultures in order to research sounds, ceremonies and rituals? If so, we’d love to hear about some of the places you have visited and any stories behind the trips. If not, where do you source/research musical inspiration from?

I guess if MUSIC is a reflection of nature -> then what is at the front edge b/t nature/human interface? -> minds intersect w/ focal points of this plane and then *boom* yes! there are the rituals! Re: search => it comes in everyday life, there’s no researching without a mind first!

I think the new times – the bright creative new times – take a certain amount of non-being to be everywhere and full-being to be somewhere. If one doesn’t venture far away from what they know, then I don’t know where they are really! Not sure who can tell us.

Speaking of travel, once restrictions are lifted, where are you keen to explore next?

Outside of North America, there are very few places we wouldn’t want to go…will go next to the Philippines, Europe, and Mauritania.

Do you share a life motto that is a constant in the GEORGIA project?

*Pattern Making Pattern Breaking* If anything, I would say we try to avoid self-critique or putting up internal roadblocks to our own process.

Finally – what is next for Georgia?

We’re starting the process of working on our next record with a label from Japan that we love. This one is pretty conceptual and will be a longer process than usual, but very much looking forward to it. Otherwise, we’re making music and visuals daily.

We have monthly shows for NTS, Dublab and The Lot Radio. The Dublab show ‘DWELL TIME‘ – is a good place to hear what we’ve been listening to lately, it’s exclusively new music we’re checking out.

For NTS and the The Lot, we make original music for the shows so that’s always a good place to hear what we’re up to, minute by minute. The images and sounds keep coming from all angles even while sleeping. Patterns printed and also ethereal blocks! Vivacious/comprehensive texture feeds. Collaborations with all of the family all the time – hashing u! The creative spirit is high mind.

‘State Effect (Accel)’ is out now via OOH-sounds. Order a copy from Bandcamp.