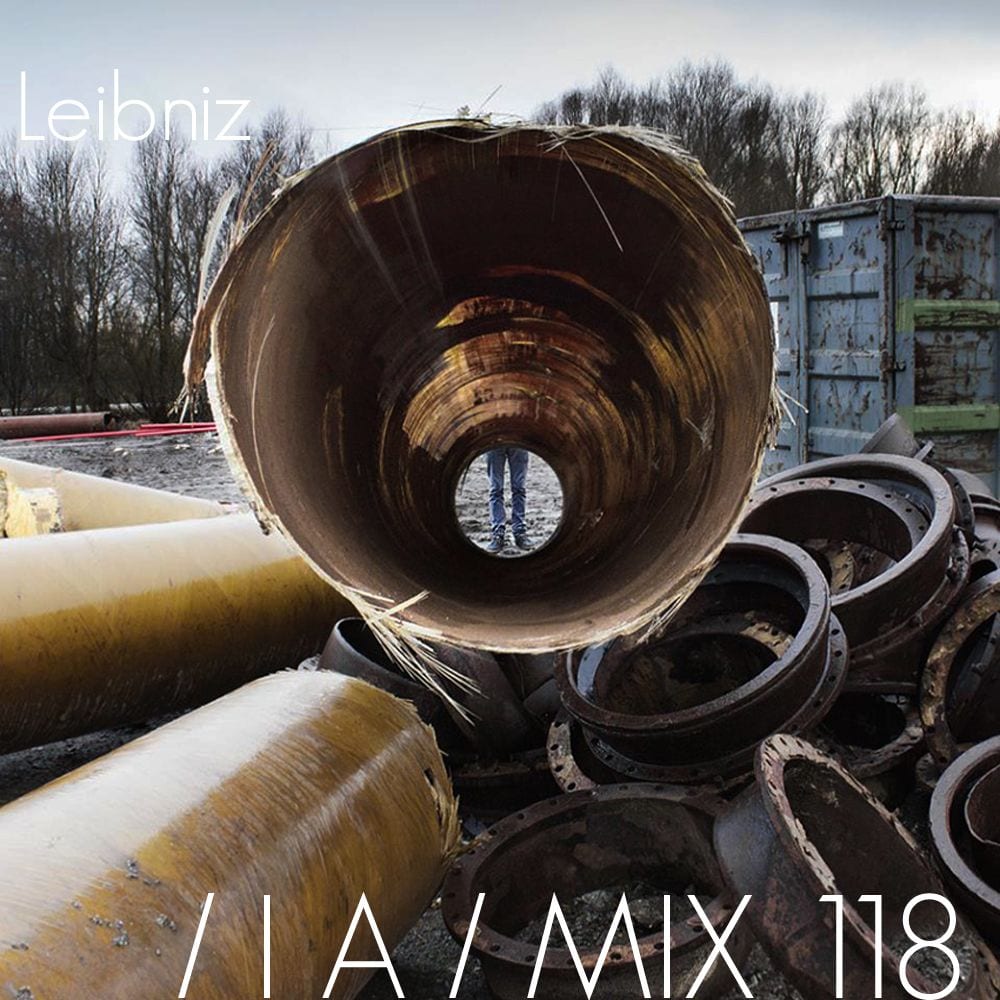 Leibniz is the production alias of 23 year old Moritz Leibniz. Originally from the small town of Dillingen in Bavaria, Moritz shifted from his classical piano roots to stoner rock, noise and Mobb Deep in his early teens, until he discovered dubstep courtesy of the Rinse FM’s compilation “I Love Dubstep“that exposed him to artists such as Pinch, Digital Mystikz, Loefah and Burial.

This mix and interview also celebrates the release of Moritz’s first ever 12” vinyl record released on Fourth Wave (Buy a copy here). In the interview below we discuss his roots into discovering electronic music and his relationship with Fourth Wave including Gerry Read and label manager Thomas Kerridge. Leibniz also sheds light into Leipzig’s oldest techno club “The Distillery“, which is sadly facing closure.

What are you up to?

I’m studying for University at the moment; I’m also finishing the mix.

Tell me about the mix.

I’m not the best vinyl DJ, so I record mixes using Ableton because I think if it’s a mix for home listening it has to be done well. It’s better for the listener as well. I have all of these great tracks that I wanted to include so using Ableton allowed me to include them.

How long have you been buying records for?

I’ve always bought vinyl. I think I started collecting records 16 years ago; I don’t have a huge selection though. When I was younger I was really into post-punk and I bought a lot of CDs and some vinyl records. I was also into Noise and Stoner Rock.

I come from a really small town called Dillingen, so wasn’t a decent record shop selling any good music. But there is a town close by called Augsburg in Bavaria, which had this alternative vinyl record shop. It was a big thing for us to go there and buy records from the shop. Sadly the store closed when I was about 16 or 17 years old.

Since that record store shut, what have you relied on to discover new music?

I’ve always read music magazines, for alternative and post-punk and rock I saw quite a bit on television. I really liked Godspeed You! Black Emperor.

I wasn’t aware of electronic music for quite a long time. I always though of it as some really ravey type of music. The first time I really discovered it was through Aphex Twin. I read about him, so I listened to it and I thought it was very different.

I also got really into Dubstep at the same time. The Rinse FM compilation ‘I Love Dubstep’ really helped me discover all of these new producers such as Pinch, Digital Mystikz, Loefah and Burial.

Was this before you were making music?

It was at the same time as I was experimenting with music. I was also listening to a lot of hip-hop, Mobb Deep really stood out to me.

I bought a shitty version of Cubase so I could record tracks. I also learnt that you could record drums on it, so I didn’t need to get a drummer. So I experimented with it and then moved to Fruity Loops. After buying that I made loads of hip-hop beats together.

Your debut EP on Fairplay Records features a photograph of you skating. Explain to me your experience and relationship with skateboarding?

I’m really into skateboarding. I first started when I was 12 years old and I think that’s also a main point of my childhood. Skateboarding was the only scene that was there in my hometown. We didn’t have a music scene, we had skating and we’d hang out everyday.

A lot of the guys who skated were also into music. We’d learn about new music through skate videos, for example “Toy Machine – Welcome To Hell” (2006) video featured a Jefferson Airplane track and I loved that music. So the videos were not just about the skateboarding, but for the music as well. I’m still into skating but I’m not amazing.

Has your music been used in a skate video?

No not really, my brother made a short video featuring a track of mine, which is somewhere on YouTube.

When did you decide that music was the path for you to pursue?

I guess it was really late, I had tracks on my Soundcloud page but I never thought that my music was good enough.

I sent some tracks from my Soundcloud to a CDR workshop event when I was living in Berlin. They played a few tunes on a proper club sound system and the guys from Fairplay Records were there and heard my stuff. Afterwards they sent me an email and asked if they could release some tracks of mine of their label. I had nothing to loose so I said of course they could.

How have you seen your life as a musician develop since releasing your debut release? Have you noticed a faster pace of life?

Not really, I’ve always been making tracks for myself. The only thing that has changed is that I get to do interviews.

I’m really excited about my new release on Fourth Wave ‘What Matters / Bring It Don’t Sing It’. It’s my first vinyl release, so it’s really special for me.

I’ve also got to meet a lot of exciting and interesting people. Playing live is also good fun. I’ve played a few time live but I’m still developing my live set up.

I played the other day in Leipzig with Ben UFO. I was super excited and a lot of friends came over to see me play. I’m a big fan of Ben UFO and it was great to meet him in person.

My live set up is pretty minimal; it consists of my laptop and Ableton. I also have the MFB 522 Drum Machine, which is kind of like and 808 but is a lot cheaper. The sounds are all analog and as I don’t have too much money it works really well.

How did you get involved with Thomas Kerridge at Fourth Wave?

I have never met him in person, only via email. I’m a fan of the label and of Gerry Read. I actually sent Gerry Read a track of mine through Soundcloud and said that I was a big fan and that he inspired me to write these tracks. Gerry wrote me back the next day and asked if he could have it and play it out when DJing. I said of course he could, he can have all of my tracks!

A few weeks later I got an email from Fourth Wave’s label manager Thomas Kerridge asking if I had any other tracks that I could send over to him. So that’s basically how it all came together. It’s weird because it’s just because of the Internet that this happened. If this was 20 years ago this would never have happened, we would never have met, but now I’m on their label.

What did your contract with Fourth Wave consist of? Do you have any more EP’s or even an LP’s scheduled for release?

I have a second EP and possibly an album coming out sometime in 2014 on Fourth Wave.

I also know the guys from Uncanny Valley and they have a sub label called ‘Shtum’ and they focus on raw techno/house so I’m doing a release for them as well.

Do you have loyalty to record labels or would you release music of any label?

I’m quite geeky when it comes to music. I want to release music on record labels that I have always wanted to release on. I wouldn’t release anything on Hot Creations for example. It would be funny though!

Is there much artist development with Fourth Wave and Uncanny Valley?

Not really right now, but I think this will happen. I’ll learn more about different instruments and the mastering process. I want to learn as much as possible about music. Everything I do is based on the ‘trial and error’ method.

Do you have many friends around you that also make music?

Yeah I know some guys who make music in Leipzig. Also when I was living in Berlin I was living with a friend who also makes music, but it’s more pop, he’s called DJ Dingo Susi. He was really good and I liked to watch him make music. That was really interesting as his process is completely different to mine.

Would you ever want to get a band involved with your music?

No not really, my music is not intended for a band. It doesn’t sound like that, it’s electronic. Kraftwerk wanted you to identify that robots created their music. Doing electronic music as a band, with a real drummer just doesn’t work for me.

What gigs do you have coming up?

On Friday I’m playing live at The Distillery in Leipzig. It’s actually the oldest East German techno club but they might have to close it because of the authorities. The property is rented from Deutsche Bahn who owns the building. They want to build house for families that work for Deutsche Bahn, so they don’t want a club to be there. I’m playing on the same night as Visionist, so it should be good.

I’m also playing at this event called Audio Invasion in Leipzig on the 23rd November. It’s got a great lineup featuring Hudson Mohawke, Julio Bashmore, Roosevelt and loads of others, so I’m really looking forward to playing there as well.

I’m assuming that Thomas Kerridge made the artwork for your EP; do you know what it is?

I’m not actually sure. I think it’s microscopic image of some kind of material, but I really like it.

Leibniz’s debut vinyl 12″ is out now on Fourth Wave recordings. Buy a record or digital download via the RAMP website.