We caught up with Japanese house music legend Satoshi Tomiie to discuss his album “New Day“, released earlier this year on his own imprint Abstract Architecture. In the interview below Satoshi expands on the dream that initially provoked him to write the album, after an 16 year hiatus. He also talks about working with Berlin based visual artist Pilar Zeta who created the artwork for the album, the result of a mutual amalgamation of abstract architecture and admiration for MFSB “Mysteries Of The World” LP artwork. For the mix Satoshi has recorded a mix in the style of a ‘late night radio show’.

Please explain the concept of your mix for Inverted Audio?

The concept of the mix is ‘a mixtape from a late night radio show’, the DJ plays whatever he feels, it’s all about good music and taste…it’s kind of random in style but good listening. The introduction was made just for this mix, played by me (Satoshi) and recorded on my iPhone :).

It’s been 16 years since you last released an album – Tell me about your idea for the album?

I like the idea of having a concept, or journey within an album, in this case it all stemmed from a dream. ‘New Day’ is not a collection of tracks, which is the nature of a lot of contemporary dance music, where listeners freely skip, playlist and select tracks from albums.

As a DJ everyone makes their own musical journey, starting with the opening track, building up and then the closing track. We all do this, but I wanted to do a singular thing with my own music and express all of my influences from the past.

The album is noticeably different to previous productions. I’d say it’s much more polished. – What do you envisage when you listen back to the album?

I’d rather let the listeners interpret the music themselves. It depends on the way that they are listening to it, whether it’s in the car, club or at their house.

As a DJ I love to use DJ tools in sets, but in this case I was more inclined to create a more musical approach to the album. This is partly due to my early affair with Jazz, the harmonies and the melodies, so I started with that first.

The really interesting thing is that a lot of my ideas are really stripped down, club orientated tracks. For me it’s mandatory to put a listening element into it, to give it some kind of story behind the album.

You’ve been building up to release “New Day” over the past few months. Which tracks have you been playing in clubs ahead of the official release?

Are the track titles random words or is there more thought behind them?

It’s a mixture of the two. The first track “Last Night” came from the actual dream I had, which provoked me to write the album. It was one of those vivid dreams that don’t make much sense. When I woke up, I was like wow this is great! But when you start to explain it to people they don’t get it.

The whole concept is abstract. It’s not referring to a specific thing. There’s no specific message within the album. It’s more of a dream. Interpretation is the key.

The artwork for the album cover is pretty surreal image. What’s the story behind it?

Well I came up with the initial idea, but I collaborated with visual artist Pilar Zeta. We met though a mutual friend who saw Pilar’s work a few years ago at an exhibition in Berlin.

I was discussing artists to design the cover and Pilar’s name popped up. I gave her a few ideas. The one thing I like a lot is abstract architecture, hence the name of the record label, and the other thing is my favourite album cover of all time; MFSB “Mysteries Of The World”.

Pilar came back to me saying that her inspiration behind her artwork was MFSB’s album. It’s got an 80’s airbrush feel to it. So it was a great surprise to discover that we had similar taste. In this case the artwork instantly clicked with me and I’m very happy with it. 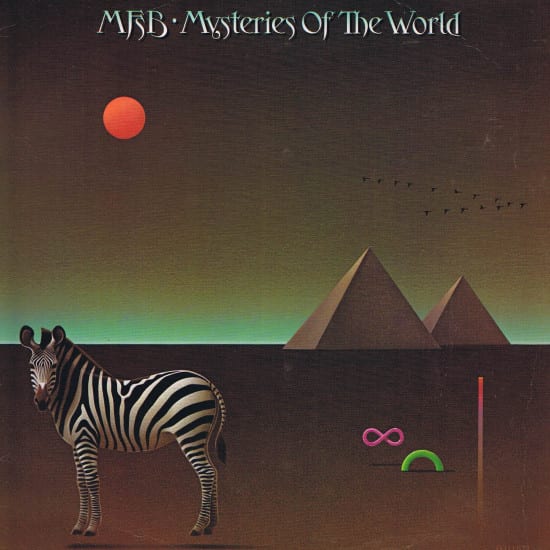 There’s been a huge gap since your last album (16 years!) – do you feel under pressure to release new music? How do you manage it?

I’ve done many sketches for this album before I finalized the songs for it. I don’t compare it to my previous work, it’s simply the best that I can do at this moment.

When you make something, you need to be happy with your craft, otherwise you cannot convince other people. If I try to impress people, I don’t think I could make good music. It’s never worked like that.

I always try to make something different. It’s good exercise for my brain.

After you made the sketches how did you go about selecting tracks for the album? Did you sit down with friends and other producers to gain feedback?

Sometimes I do that with my friends. You try and compose something at the time, but you end up leaving it for a few months before you have another go at it.

You then go back to it after a while and it sounds fresh. So inspiration comes naturally. After a few weeks you might not be so into it, these things happen. After 20 years of experience you learn to deal with it.

Which other record labels do you admire?

Rush Hour have been making quality records for a long time. There are also a lot of other labels, such as Bass Culture Records run by D’julz in Paris. It’s more of a DJ orientated label. There are many more labels that I turn to for inspiration.

What’s your interpretation of social media?

It has its pro’s and con’s. The pro’s are that it gives you instant reaction and feedback. The con’s are that there is no mystery anymore.

Pre-internet, if you heard about a DJ you actually had to go to the club and listen to them to see what they do. By not knowing everything, it makes it a lot more interesting.

The artists that I really admire, I don’t want to know anything about them. I’d rather they’d remain an idol and someone that I admire. I don’t want to talk to them. The Internet is great for sharing and collaborations, but diminishes the mystery behind the artist.

Abstract Architecture is your new record label, tell me about the imprint?

I came up with it during the album process. I mentioned earlier about the abstract quality of the album. I wanted to start something new, alongside the album, so it’s been in development for the past 2 years. I love to put my hands on equipment to make stuff, so when I travel everything stops. Some of the hardware is in New York, some is in Paris, and so I need to spend time to work on it.

Do you find travel frustrating?

Yeah for writing the album, but it’s also excellent to travel. I tried to do everything in the computer but it’s not the same. It doesn’t vibe with me well. Of course travel breaks up the process. I know some producers who hire other people to produce music for them, but that’s not my style.

Do you have a certain method for producing music?

You collaborated with John Schmersal (Caribou) on the track “New Day”. Tell me about that?

I had no idea who he was, but it turned out that John is a friend of a friend. When I was listening through some of the tracks from the album with my good friend he mentioned that the track needed male vocals. John was busy with Caribou, so it took quite a while for him to deliver his track, but I’m really happy with it.

We’ve only met once, when he came to the studio in New York, we hanged out and chatted for a few hours. That’s the beauty of the Internet, working with people who are in completely different time zones.

You split your time between New York, Paris and Tokyo? What attracted you to Paris in the first place?

Paris is my European hub; it’s very easy to get to. From New York it’s a 6-7 hour non-stop flight and the food is great. Also the electronic music scene is getting better and better in Paris.

Paris is similar to New York and London in a way. It’s very international with lots of people coming and going and there’s a big mixture of cultures. The museums, galleries and exhibitions are great too. After living in New York for the past 20 years I still love the city, but it’s nice to get out.

New Day is out now on Abstract Architecture. Order a vinyl copy from Juno.