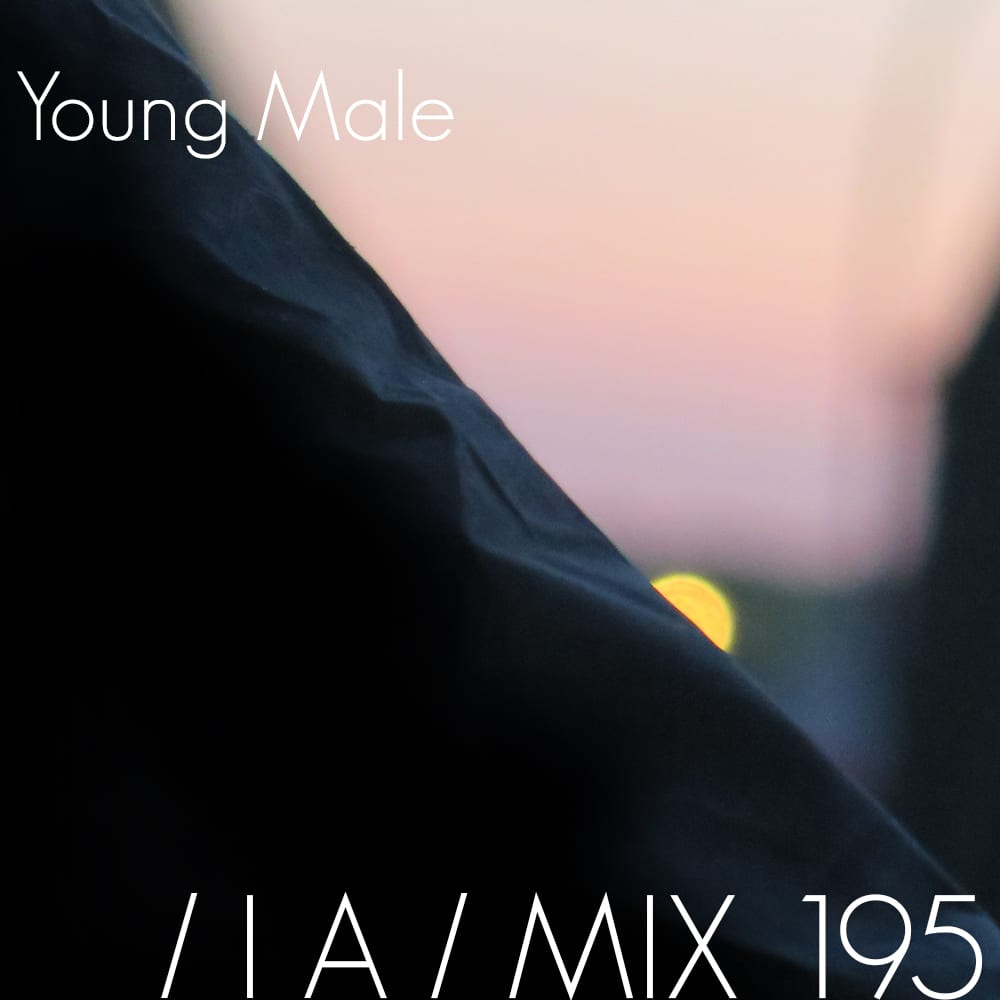 As you must already know, this Friday (13th November) we will celebrate the inauguration of our new audiovisual event series at Bussey Building with White Material’s co-founder ‘Young Male‘, where he’ll perform an exclusive live set and to close his European tour.

Ahead of the gig, the NY-based producer recorded a pure 4/4-focused mix of sleek techno and hardened-steel material. In the interview below Young Male talks in depth about his tour and what the future holds for his White Material imprint, including new releases from Galcher Lustwerk, DJ Richard and Young Male, plus some long awaited White Material represses. 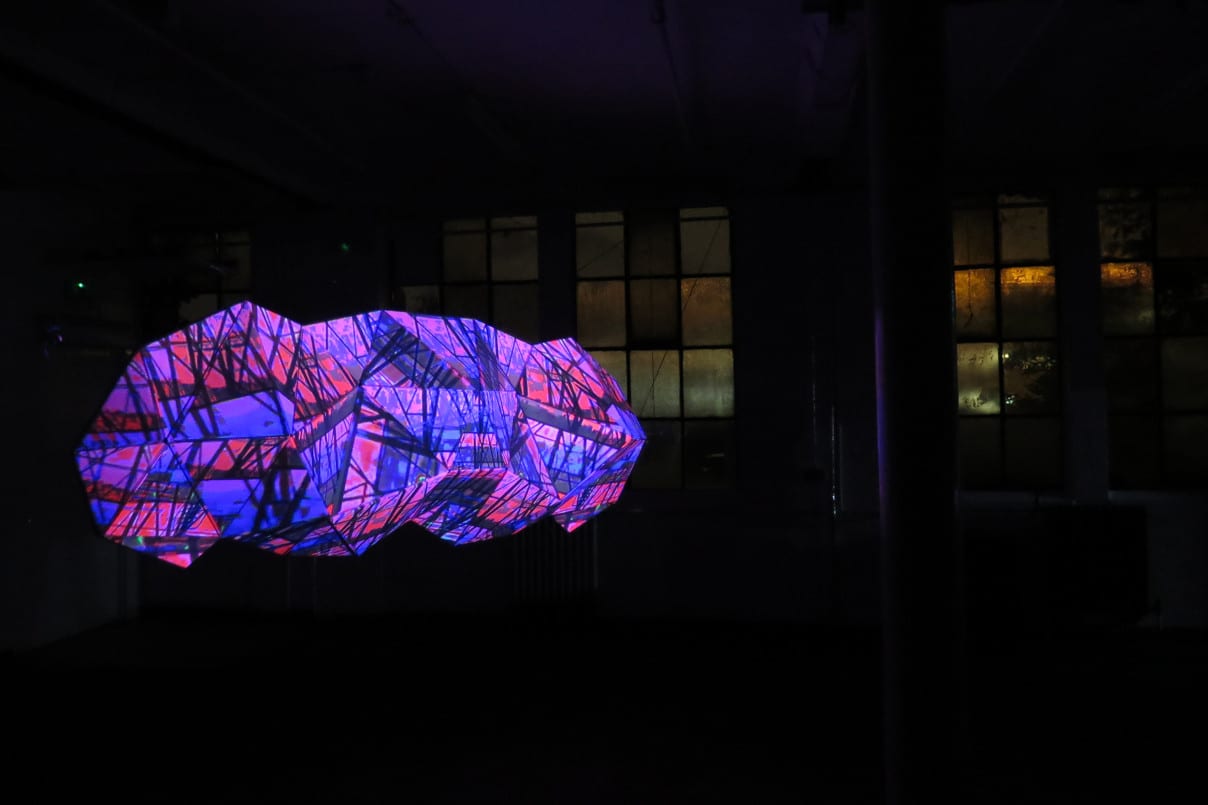 Tell us about the mix you’ve recorded for Inverted Audio – any tracks that are particularly special to you?

I worked on this mix over the course of 5 days in New York. After experimenting with a few possible directions I ultimately decided I wanted to make a driving but musical mix with a technical focus on eq work.

All the tracks I used are quite special to me and have been recurring in my DJ sets over the past 6 months. The Alvin Aronson track and the Terrence Dixon track, which begins the mix both have been running through my mind everywhere I go.

We’ve shared our video teaser of the party – what were your first impressions of the video and light sculptures?

The video gives a nice preview of the space for the party. The light sculptures have a U.F.O. quality to them, like some churning amorphous anomaly in the night sky. I’m excited to see them in person.

How has your European tour been so far? Looking forward to ending it in London?

The tour has been phenomenal so far. Playing for Grounded Theory in Berlin with Electric Indigo and Helena Hauff couldn’t have been better. The gig at Golden Pudel in Hamburg with DJ Richard was also something special. It was an honor to perform there, It’s a venue which reminds me in many ways of the spots I used to play while living in Providence.

This past weekend I played the Counterpoint party in the legendary Sub Club in Bratislava (an abandoned WW2 era nuclear bunker underneath a castle) and the beautiful Club Adriatico in Ravenna (a repurposed sulfer manufacturing plant). I didn’t know what to expect from either place but was completely blown away by the crews that throw these parties. You will absolutely be hearing more from them and I dearly hope to return to both places.

The support I’ve got from the European crowds and promoters has been huge. They’ve 100% faith in me and that raised the level for my performances. I feel London will be the perfect city for the final stop of this trip. My set will without a doubt be in peak form for November 13th. 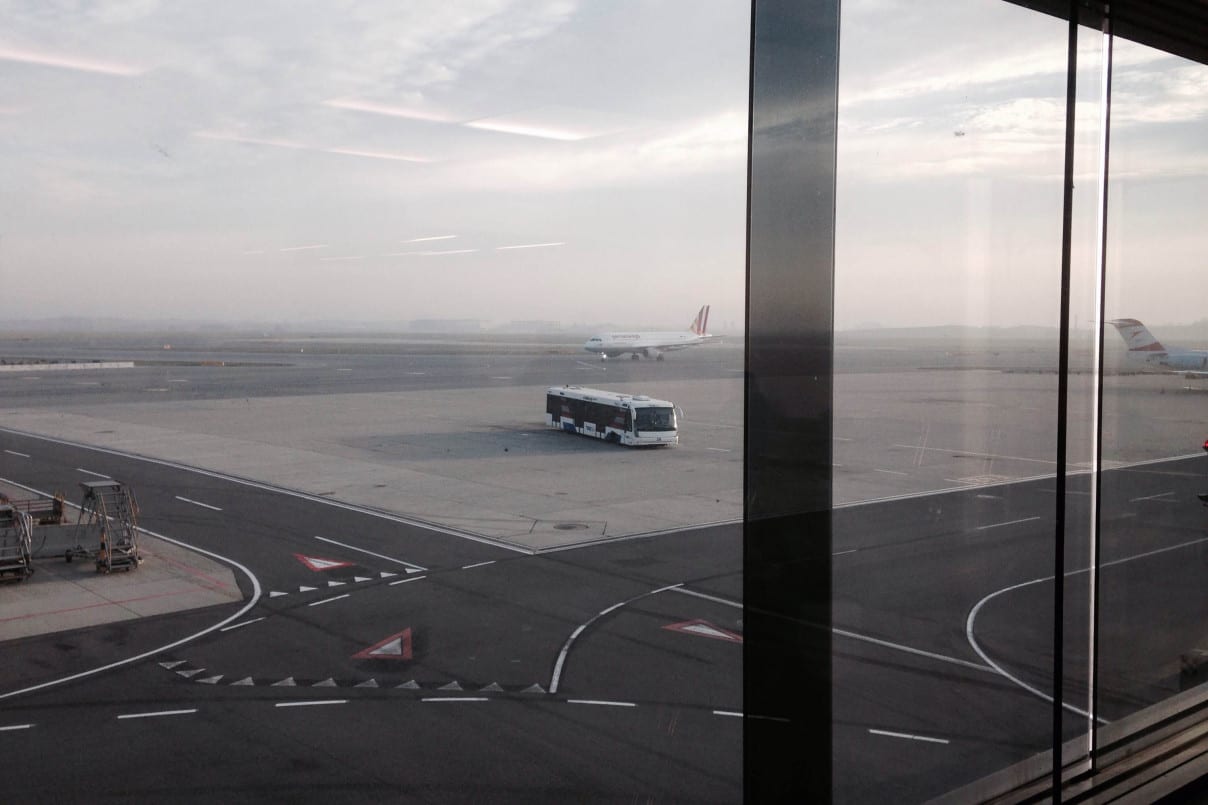 Tell us about the development of your live set over the past 3 years?

It has evolved quite a bit over the past 3 years. At first it was around 15 minutes long and entirely percussive. It was very simple and very direct. As I continued to add equipment I began to incorporate arpeggiated synth lines and pads to the set while building the performance to an hour.

This was a difficult phase and I dealt with some growing pains after realizing that perhaps what I was doing was too simple for an hour long set. Recently my experience DJing and increasing comfort level with the gear has allowed new techniques and subtleties to develop. Now when I play I focus quite a bit on eq in the same way that I would if I were DJing or producing.

Do you prefer to DJ or play live?

I do not prefer one. Both are important forms of performance for me and each teaches me new lessons which apply to the other. I think I have only begun to show what I’m capable of in my live sets and DJing and I plan on doing both for the foreseeable future.

Not giving too much away, what can people look forward to from your live set in London?

We shared the news of Alvin Aronson’s ‘City EP’ – What’s next for White Material?

From looking back at photos – the one photo that stood out to me was of your mom helping you hand stamp WM001 vinyl sleeves – what do you think your mom thinks of the label since you established it?

Mom has always been a fan and been supportive of the label from day one. She has seen me working on music in some form or another since I was 13. I believe she’s proud to see me living my dream.

Tell us about life in NYC before the imprint – It looks like a tough job but ultimately pushed you to setup the label and its visual identity.

Yeah, It was a formative time for me. I was living in Brooklyn trying to figure out where I fit in New York. Looking for new allies, trying to grow as a person and a musician.

At that time I was working 40 hours a week making hammers and veneer saws for a small company in Sunset Park. I loved that job, it provided a lot of inspiration both audio and visual and maybe more importantly gave me mental toughness. 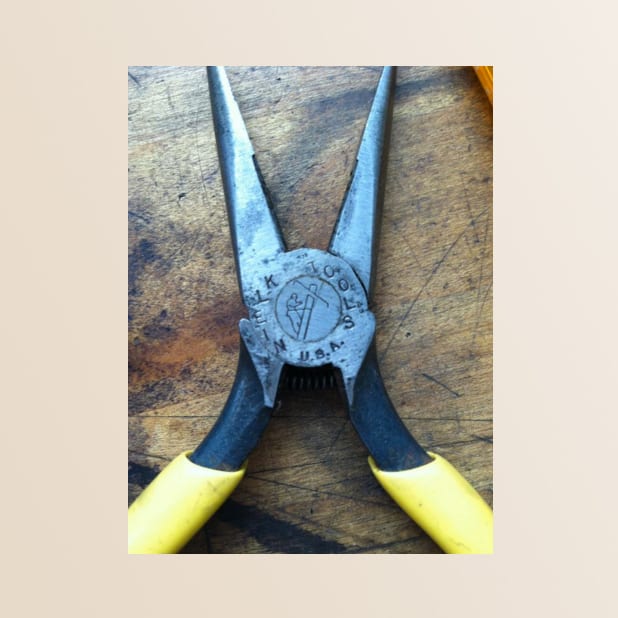 I have fond memories of carrying boxes of 50-80 records to work in the snow and spending my lunch breaks at the post office mailing them to Europe. On weekends I would go to the Bunker parties or bartend and play live at the parties that would happen at DJ Richard’s house where I was the resident live act. I didn’t have a pot to piss in but they were great fucking times.

Since its creation, you managed to keep White Material a family affair. I guess that one year release break has been beneficial to you, especially following that crazy 2013 breakthrough.

The one year break was not by choice. I’m not sure it was good or bad, it just happened. It is what it is. It was a situation that was unexpected but we adapted and overcame. At the end of the day we’re a crew doing our thing and doing it how we want to.

Your second release out of White Material is coming out on Luke Wyatt’s Valcrond imprint. Can you tell us more about this record?

Luke approached me about releasing some weirder non club music about a year ago. It was something I’d been considering so his interest was a catalyst. This is my second release outside of WM001 on White Material. The first was a TR909 based EP on Work Them Records.

The upcoming record for Valcrond is an LP of 9 shorter songs going back to the original incarnation of the Young Male project. Some are ambient, others have percussion. It’s a bit of a concept album centering around my recent experience of life in America.

Paranoia, virtual existence, lust, angst, rapid change. I wanted to capture some of these feelings while also injecting an element of fantasy and story telling into the music (edit: on the eve of this interview being published the album has been delayed another 6 months due to pressing plant delays and will most likely now be released on White Material…..stay tuned) 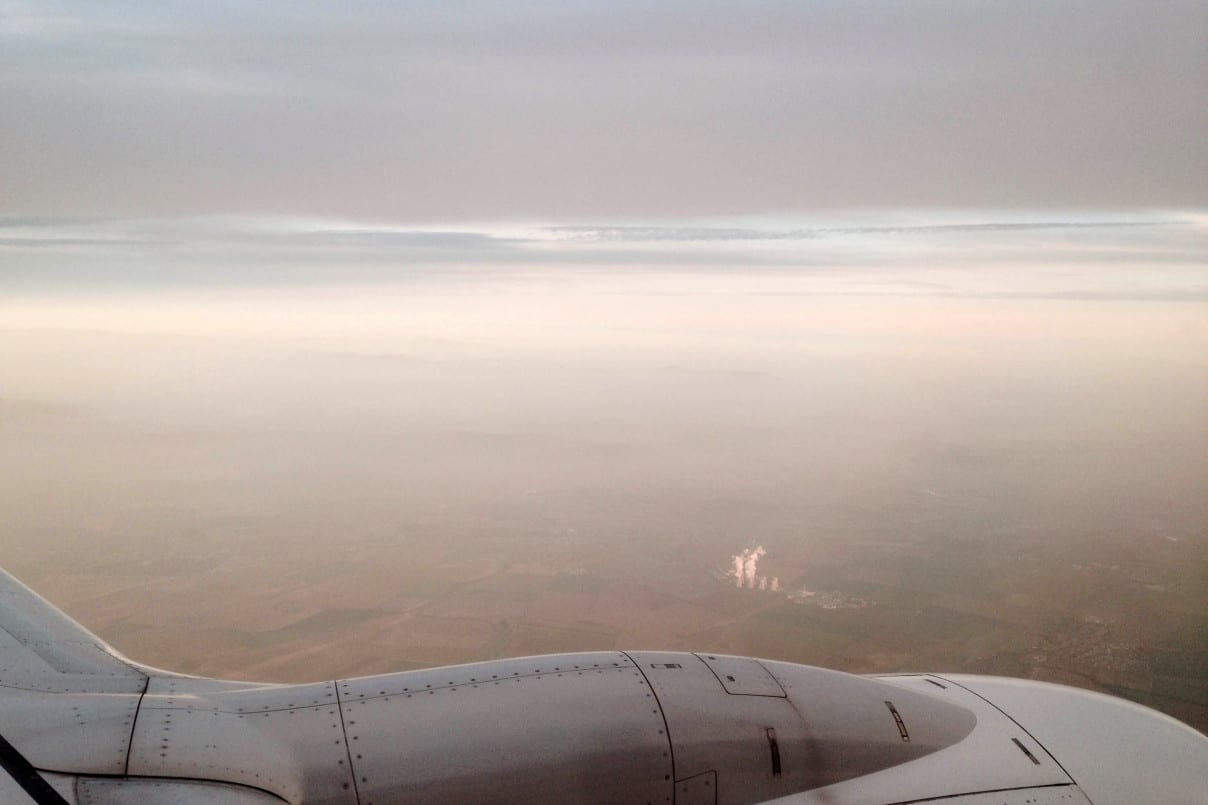 Which artists, producers, bands are you looking up to?

There’s a lot of people doing a lot of really good shit in various genres, they all inspire me and keep me excited to be on this planet.

WM’s co-founder DJ Richard left NYC a while back and doesn’t seem to regret his choice of moving to Berlin, which he says gave him much more time to work on his music. Do you ever think about moving over to Europe?

The thought has crossed my mind. I love Europe, but New York is my home. There’s an undeniable magic to that city.

Read features and discover more about our audiovisual rave at Bussey Building. 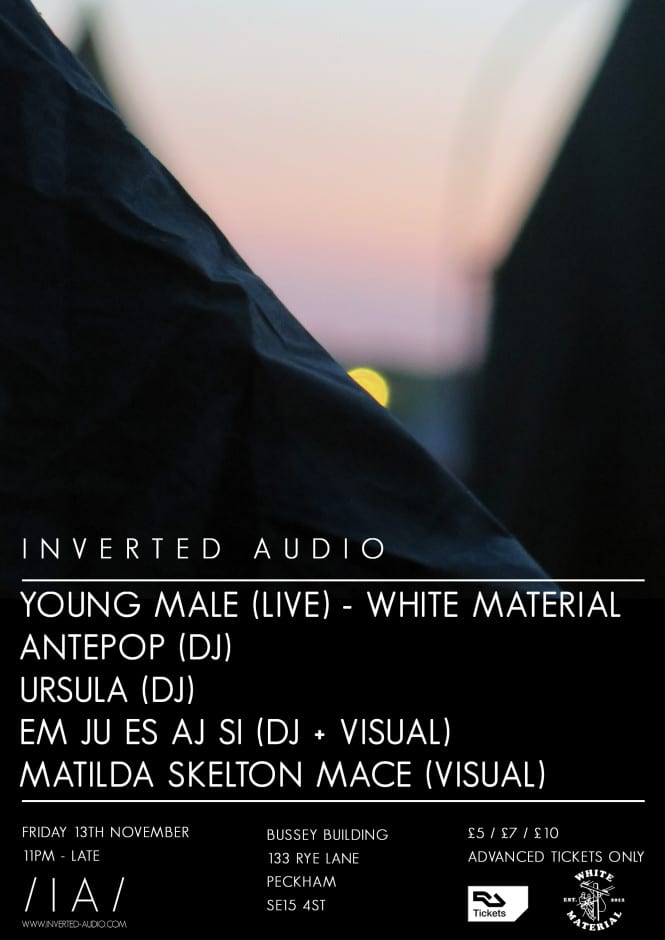 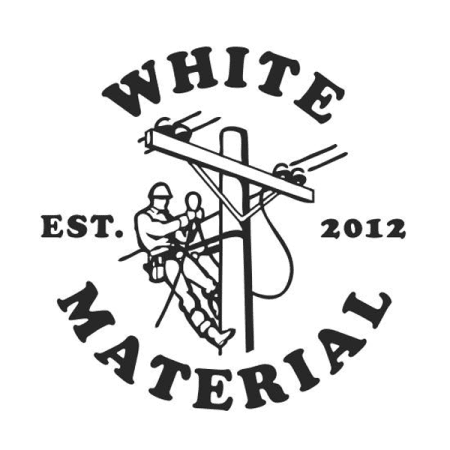