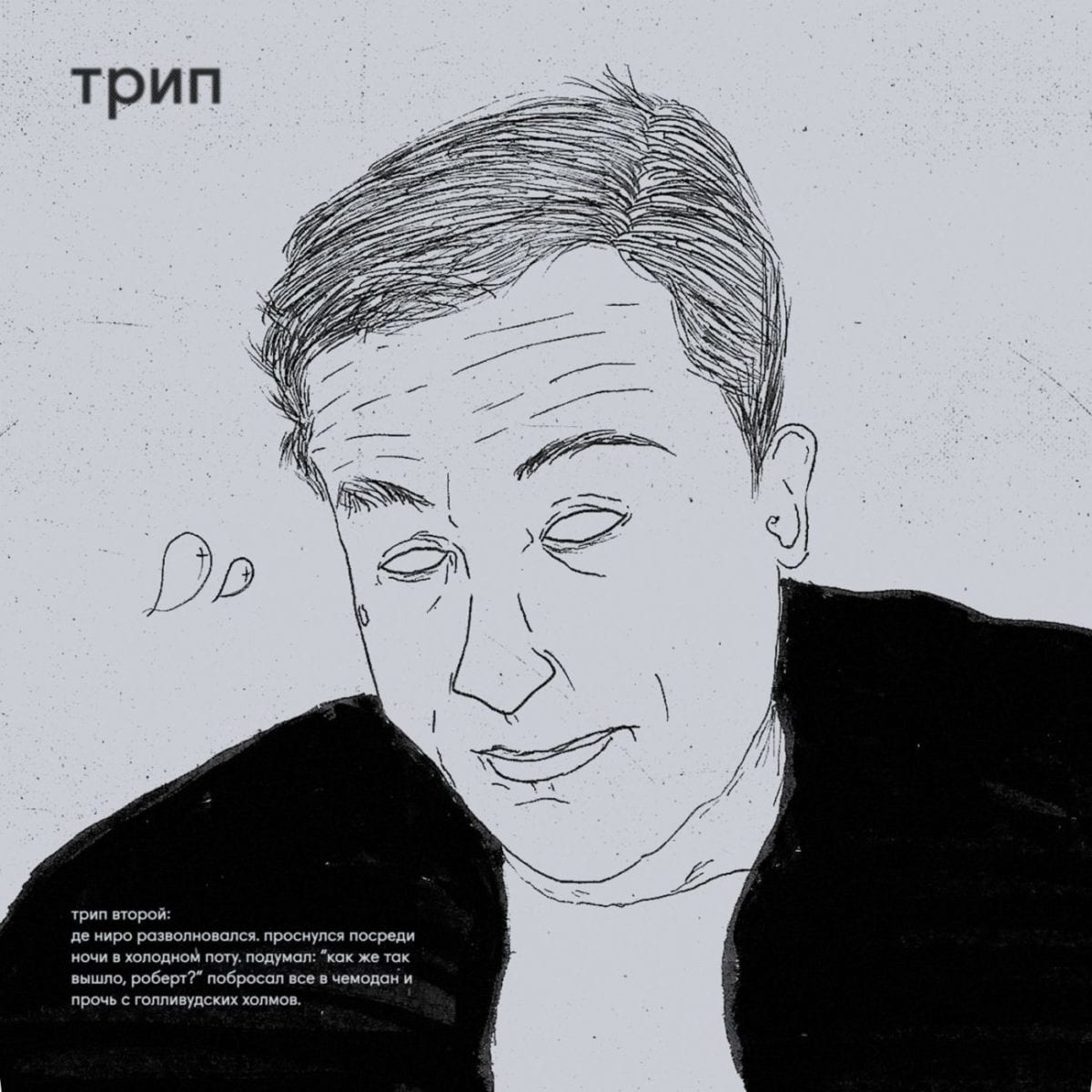 Nina Kraviz’s трип / Trip label reveals its second multi-artist double-pack ‘De Niro Is Concerned‘, again taking its name from a dream scenario imagined by Nina Kraviz, to which the release has been conceived and programmed as a soundtrack.

New names to the label arrive in the shape of Amsterdam’s Tape Records co-founder Deniro, who contributes two tracks, Moscow’s Monasterio club resident Nikita Zabelin, and the mysterious Barcode Population, whose ultra-rare self-titled cut features as the release’s sole reissued track and will feature on the vinyl edition only.

Most of the tracks on ‘De Niro Is Concerned‘ are one-take live studio recordings, in keeping with the concept and aesthetic Kraviz envisions for трип. Below you will find quotes from Nina Kraviz explaining the concept behind the compilation:

“The idea of this compiled album / concept compilation was born during one of those late night conversations. I was talking to Reynier (Deniro) when the body is set for a good night sleep but the head rebels against that boring plan and all these strange scenarios start popping up in a quick cycle of images, phrases and sounds. This time it was about one of those moments when you suddenly realise that you can’t continue as you did before and there is no way back. I was in a 4am facebook chat with Reynier (Deniro) and we both thought Robert De Niro might have had a moment like that…”

“I told the story to Tombo, our трип artist. He is 21 and from Portugal. He drew the artwork for The Deviant Octopus (TRP001) and flyers for our label parties. He used to draw African tribe masks. He found the name “Tombo” on the website with a lot of tribe names and felt a big connection with it: ‘tombo’ in Portuguese meaning ‘falling’, or as Tombo sees it, falling into a new universe, new creations and infinite space. I met him by chance: He drew a really creepy image of me at random as a part of his serious “mental diarrhoea”. I contacted him immediately, so excited that that I scared him to death. I was about to start the label and told him the story about the Deviant Octopus and he visualised it 1 day after with a lot of talent. This time it was a bit tough to jump from probably an Octopus to a famous actor, De Niro. But he managed pretty well.”

“That story linked immediately with the Deniro, Parrish Smith and Bar Code Population works I had planned for the label’s second release. It was like a perfect soundtrack to them – I just had to find the rest of the music to finish it. After about a month of playing all the music in a different order the soundtrack was finally finished. Most of the tracks in TRP002 are live recordings, which is a key part of our label’s concept: to release music that is abstract and very specific in texture, yet very human, unplanned and organic, because I really believe in music that captures the emotional moment of when it was made.”

Discover more about Nina Kraviz and Trip on Inverted Audio.