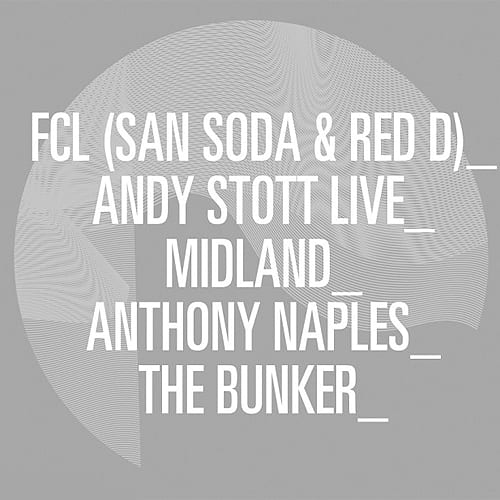 The past few years have seen Corsica Studios, by Elephant & Castle underground station, ascend from niche attraction to major force in the London club scene. While this upward mobility may have resulted in a slightly less appealing crowd, now made up more of scenesters than those just out to have a good time, the venue’s ability to pull in spectacular line-ups hasn’t changed a bit. On Friday, the boys at Oscillate Wildly made some excellent choices, filling up the larger room one with bright, housey tunes while leaving room 2 to host to the darker side of today’s dance scene.

The first big name of the night was New York’s Anthony Naples, who made some waves last year off the back of his Mad Disrespect single and his association with NY night / label Mister Saturday Night. For his UK debut Naples played out a great selection of chilled out house jams, with a lot of analogue sounds and dusty, feelgood melodies. While his mixing wasn’t always perfect (everyone’s gotta learn sometime), track choice more than made up for what he lacked in technique, lacing hot contemporary cuts with straight-up classics. Naples was followed by classy scene-stalwart Midland, who effortlessly delivered the best set of the night over a slick two-hour set. Melding some tasty dubs (his own Trace, Joy O’s ubiquitous BRTHDTT!) with an occasional unexpected move, including a great African rhythm that broke the crowd into wide smiles, Midland proved himself the best of the night at balancing a powerful, consistent groove with great surprises that kept the crowd on its feet.

Unfortunately, it quickly became clear that the event had sold a few too many tickets: by halfway through Midland’s set the crowd in the room had become too dense to really dance, meaning that punters were left with the options of either staying rooted to the spot or going through to the emptier room two. By the time FCL came on to do their thing (a surprisingly disappointing set of soul-infused house tracks which never managed to keep up a solid groove) there was little space to do anything other than stand still. Although the Belgian duo did manage to conjure a few special moments, best of all the lush warmth of their much sought-after It’s You, by the early hours those intent on really dancing had moved through to the other room.

Room two did actually have a lot to offer those willing to sacrifice the colourful house vibes. Andy Stott played out a suffocating live set, all chugging 4/4s and deep, atmospheric melodies, to a rapt audience (who were, again, a little static- perhaps due to Stott’s appeal outside the dance circuit), before delving into more club-orientated sounds with some furious acid gurgles towards the close. Following Stott’s exit, US scene stalwart Derek Plaslaiko, one of the chief players in NY’s The Bunker, came on to deliver a great 4 hour set of darker tunes dominated by big basslines and powerful rhythms. It was a great way to end the night for those who didn’t feel they could get their dancing shoes on to FCL’s lighter tunes on the cramped dancefloor. Musically Corsica and Oscillate Wildly show that they’re still on top and know how to put on a great night, but in the future a little more attention should be paid to space- there’s no use playing out great music if there’s no space to dance.