Darren Cunningham is as unique and as iconoclastic as they come. Far and away from the general mill of modern producers, his work under the monikers Actress and Levantis has been exemplary without fail — divisive, often in recent times, but never conforming and always intriguing.

On the evening of 14 May 2019, Actress performed a standardly unique piece of new avant-guard music, a rehash of late classical pioneer Stockhausen’s Welt-Parliament, in no less a venue than The Royal Festival Hall at the National Theatre in London.

Being tasked by the National Theatre to revamp a revered work such as ‘Welt-Parliament‘ is no lightweight responsibility, but a more fitting modern musician to undertake the task could hardly be named. Whilst many electronic musicians have dabbled in classical composition and collaboration, Actress’ particular ability and techniques leave him a fair head above even the most adept, as was demonstrated throughout the latest LP alongside the London Contemporary Orchestra.

An innovator in electronic classical composition bestowed with a wealth of accolades and criticism, Stockhausen was allegedly one of the first classical composers Cunningham began listening to — an unusual introduction but befitting the musician’s eclectic tastes.

Stockhausen dabbled and became a luminary in compositional techniques including spatialisation, serialism, “post-tonal” music and controlled chance. All are present in Actress’ work, and the performance seemed exercise in showcasing as such.

A crucial element of this showcasing was the appearance of Young Paint: a machine-learning script developed by Actress around the time of his eternal classic ‘Hazyville’, the script has been steadily building understanding of Actress’ methods of musical production since then. After roughly 4 albums and assorted 12”’s (and god knows how many scrapped project files), in the closing days of September last year, Young Paint released its own album, or at least a collaborative process. I can’t think of another AI script with its own Spotify profile. 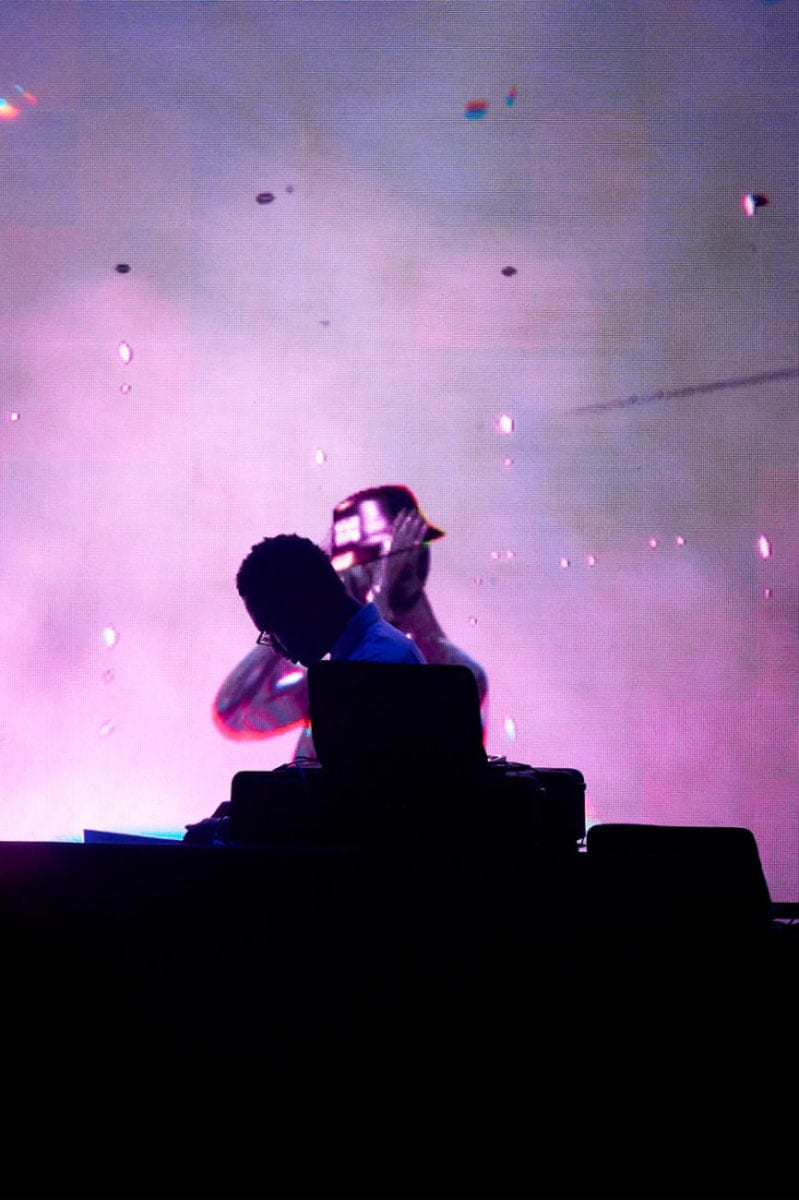 All this lengthy explanation merely frames the event itself. The lineup: Actress x Young Paint, performing a rendition of Welt-Parliament with student of Stockhausen Vanessa Benelli Monell on grand piano, the Netherlands Chamber Choir and the London Contemporary Orchestra’s Robert Ames as conductor. Young Paint and Actress’ contribution consisted of sound samples and words sourced from a debate posed to MP’s by Cunningham with the eternal question “What is love to you?”.

Arriving a few minutes late — forgivable, I think, considering the National Theatre’s labyrinthine complex — to a darkened room of grave-like drone and soft lighting haloing in a gauze of smoke, as if the ghosts of Ghettoville had risen an occupied the room.

Immediately noticeable is Actress, uncomfortably in shirt and tie, illuminated in the right corner. A projection on the wall behind him of a darkened bedroom occupied by a doppelgänger. The film is greyscale, and as Cunningham navigates oblique machines in front of the screen the doppelgänger moves slowly through a routine. Subtle redshift grain begins to develop on the clothes in the wardrobe and elsewhere as if the film is degrading.

The Royal Festival Hall’s cavernous, ululating ceiling and striking white balcony boxes are just as brutalist as the buildings outside. It gives the impression of the audience being forced into the earth, sunk into the stalls by the claustrophobic tones created by Actress, and the pale grey lighting bearing down from above.

In the dark Monell can be seen scrawling something (conceivably sheet music) at the seat of her piano, passing notes to Ames. Indistinguishable ecclesiastic German (or perhaps Latin) notes jump up, a fascinating blur of soprano and baritone, male and female. There’s a striking balance of human cadence and electronic fuzz. In a blink the choristers appear visible in the aisles, parading through the audience garbed in translucent white coats like HAZMAT gowns. It’s a scene very evocative of both Catholic ceremony and more occult events — it’s unexpectedly theatrical, but also foretelling.

Actress has been providing a mixture of drone and synthetic atmospherics mirroring natural phenomena: rainfall, wind in the trees, the sea crashing against faraway rocks — these are all brought to mind in subtle, minimalist development. The bedroom view behind Cunningham continues to slowly decay from black and white into false colour, lacerations of red and yellow growing in the closet and on the table. 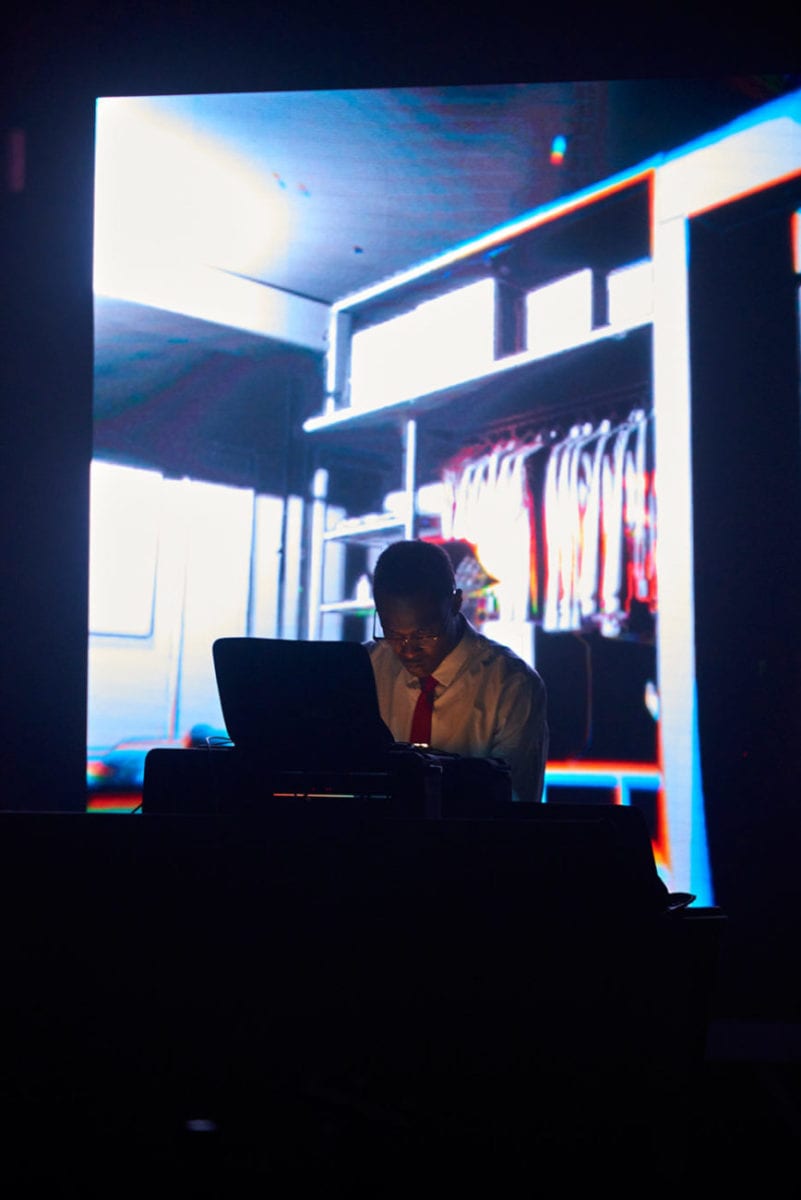 Very, very gently, Monell’s fingers grace the keys for the first time. Her music is febrile and she is full of expression in the gentle arpeggios, rocking back on the stool in passion as the spotlight warms her. The lights remain pallid but warm a little into a blush of pink, and a pattering of synthetic rain pours from the hardware stage right.

Electronic, piano and choral parts take turns in competing for prominence, sometimes working in wondrous harmony and other times crazily vying for attention. Memorably, during a particularly emphatic and disjointed vocal section a programmed synthetic voice blares “TRANSCRIPT, SOPRANO”, before hurtling through a passage of latin which seems to be lifted directly from Stockhausen’s original. The choir continue, yet once more the voice (which can only be assumed to be an output from Young Paint) blares out the phrase once again. This time it builds into a droning blur of the binary prime, “1111111111111111” undercutting the choir section entirely and eventually overwriting their lyrics in a chaotic explosion of repetitive “EINS”.

A short and odd play performed by the choir occupies the middle of the performance. The actor’s scripts feel like they were composed by a computer, rather than a representative member of parliament, to provide an answer to Cunningham’s question “What is love to you?”. The irony is inescapable and it really helps cement the reasoning for including Young Paint as a contrasting, non-human entity.

Through the postulating of Cunningham’s artistic direction – the play challenges and updates the relevancy of the original, binding it to the modern age through the shimmering opacity of AI. The performance at times was challenging — particularly for those who were naively expecting like-for-like reproductions of Actress tracks — but it is dense in reference and intelligent application of themes Actress has been developing for years.

In the quality of the reference it escapes criticism of exuberance or abstraction, not least of all because Stockhausen was known for bizarre live performances himself. But, despite the moments where the audience were pressed to remain objective (the binary shouting sequence did bring about some muffled laughter), the evening overall was filled with moments of wonder.

Not least is in regards to the chrome doppelgänger in the projection: despite affirming throughout the evening that the figure is no more than the projection, as the film decays from greyscale to striated colour and then further into softened neon shades it seems to become more and more alive, more physically present. At the end, nothing but its motorik movements and Cunningham’s guide light remain to see by — a reminder of the powerful creative mind who conjured such a show.