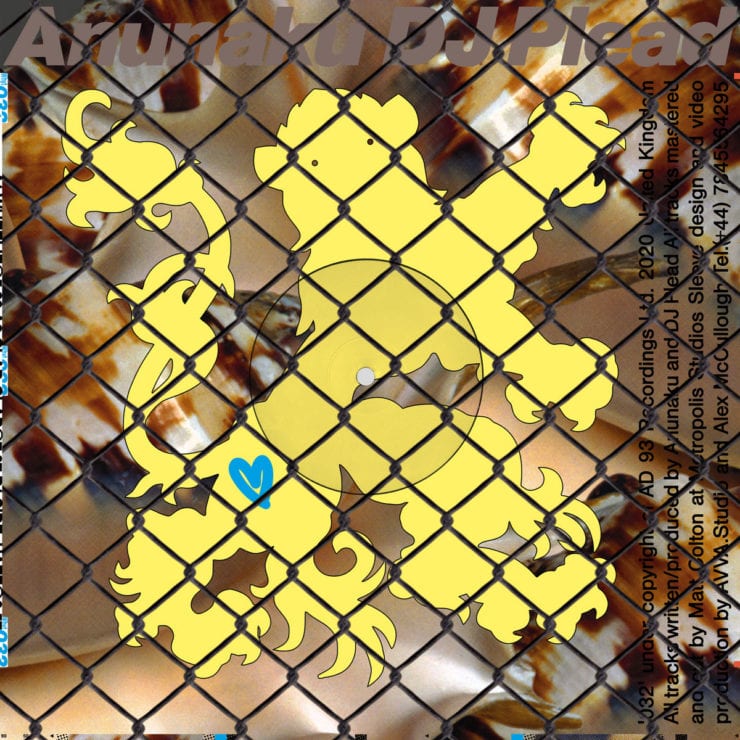 It was only a matter of time before the London-via-Italy producer Anunaku aka TVSI and Melbourne-based DJ Plead released a record together. As individual producers, both Anunaku and DJ Plead favour percussive-heavy bangers that float in and out of tempos and genres.

As half of the crew behind London’s experimental imprint, Nervous Horizons, Anunaku even released DJ Plead’s breakthrough dubstep-leaning ‘Pleats Plead‘ EP in 2019. This is all to say, the collaboration on Nic Tasker’s freshly rebranded AD 93 (formerly Whities) is a welcome and perhaps inevitable collaboration.

Each track on this EP are heavy and dense, weighted by complex sound design and encyclopaedic knowledges of global bass music cultures. The bass hits on ‘Wheele’ feel like subsonic heartbeats every 4 bars, reigning in the skittering high-end and synth squeals higher in the mix. It feels paranoid and even the sample that sounds lifted from the Lebanese debake DJ Plead grew up on isn’t able to lighten the mood.

Despite its name, ‘Clap Clap‘ starts with a focus on the low end. The bass is slow and sluggish, driving, but not rushed as it holds together the pattering claps that dominate the rest of the stereo field. It makes the start of the track funky (and a little bit sexy) before we are introduced to another melody that could just as easily have come from a Lebanese wedding and a vocal sample wafting in from London pirate radio.

This is also what makes this EP such a success as a joint effort. On each track you can hear what both producers are bringing to the table and on ‘Haze’, they come even closer to perfection. Although a series of drum programming makes the song feel complex and winding, there is a 4/4 kick that gives the song a distinctly techno feel.

At this moment in time, we are living through a necessary and important moment where we are rethinking the racial, aesthetic, and economic structures of dance music. This has included everything from Fauzia’s excellent (and, sadly, deleted) critique of how the “bass music” imprint has operated to ghettoize certain artists and genres to how the architecture of clubs themselves facilitate different types of racial and sonic hegemony. The slippery rhythms, pummelling bass, and ear-worm melodies on this record are yet another entry into a growing archive of new forms that are growing out of the embers of clubland.