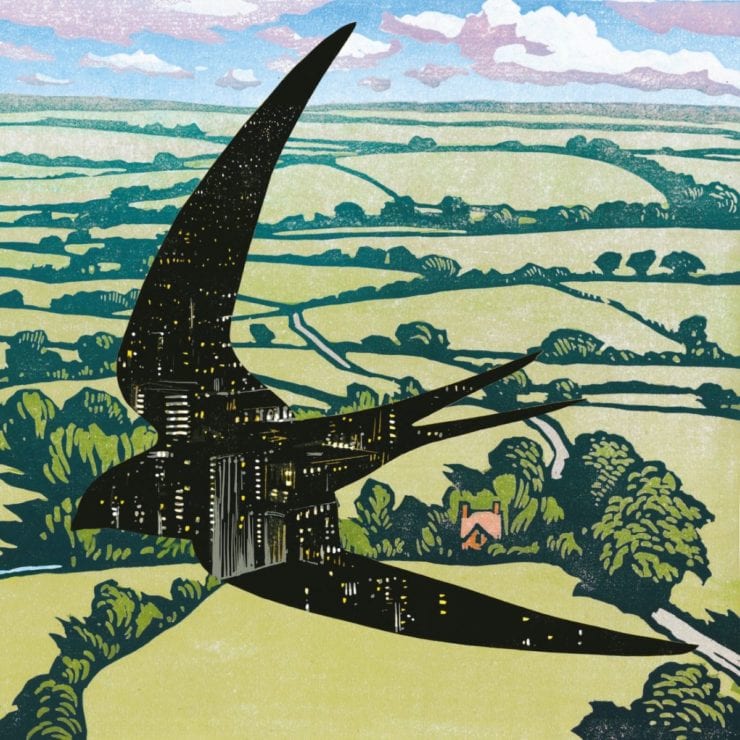 Master Indian Raga singer Pandit Pran Nath once remarked “walls have a stuck feeling, outside, have what can fly ideas.” And look at us now, in this very moment, locked down, restricted, unable to live as we were used to. It’s a strange turn of events with the preceding cultural zeitgeist calling for isolationism, nationalism, protectionism, and a closing down rather than opening up of the global freedoms that were once a progressive ideal. These are indeed strange times.

The African swift (bird pictured on the artwork) does not have these problems. She travels with no regard for borders, no regard for nations, no thought about barriers. She travels because she needs to – following a deeply engrained impulsive reflex, movement for survival. One could possibly argue that the journey constitutes her chains, but just imagine what she sees as she travels over oceans and continents, thousands of miles to reach her destination, airborne all the while, working in tandem with the wind, sleeping on the wing.

Bibio meets the Swift as she crosses the channel after flying from the north eastern Sahara up through Spain and France, following the warm air and the sustenance of winged insects, living life in a perpetual summer. Bibio is watching her arrive, looking up from the riverbank as she renders Pollockesque free wheeling lines through the hazy blue.

On this EP, Bibio attempts to capture her romantic escape to the rural life, tracing her movements and encounters with the companions she meets in the English countryside. If one joined the dots of Bibio’s crotchets, quavers and minims, with a single line, and took away the staves, maybe we could actually see the flight path developing before us.

Bibio brings us back into his natural world, with great aplomb, giving us ten sublime pieces of folk music that continue much in the same vein as his previous album ‘Ribbons’. These are beautifully produced works that conjure images of murmurations, eddies rippling through a river, midges, dancing and floating in the sunlight, or a bluebell making its mark in the hedgerow. The mix of traditional folk, a pinch of psychedelia, field recordings, and a timeless sonic aesthetic makes for a wonderful listening experience. All the pieces are beautifully rendered, with a stunning lightness of touch in both melody and space.

If Robbie Basho, takes us into a timeless American forest setting then on a track like ‘A Couple Swim’ Bibio allows us to revel in the bright yellow beauty of the English countryside on a summers day. This is work that takes it lead from the artist John Martin, but furthers his work with the introduction of contemporary ambient textures.

These hazy acoustic studies lift us up, hold us hovering in a shimmering, sun drenched, glistening cloud over the ever moving river, content with all of its stories eddying under its peaceful surface. Yet the folk structures that Bibio employs don’t come off as twee. One can hear Bibio’s sophisticated, yet subtly used contemporary phraseology in the vocal structures and bass lines of tracks like ‘Oakmoss’, that is more soul sailing than wassailing.

Just like the solitary heron that sits patiently on a rock waiting for her quarry, as the river floats by, then takes flight in a singular elegant movement, like a dandelion seed floating in the wind, effortlessly drifting above it all, Bibio’s skilful instrumentation, masterful arrangements and sonic precision, have a fluency which perfectly represent the idyllic scenes he captures.

I am moved to be still, to focus in on my surroundings and find the beauty wherever it can break through the concrete urbanity of contemporary life. ‘Lightspout Hollow’ is a glade, where the leaves splinter shafts of sunlight, leaving dappled shadows shining a million tiny spotlights on the moss covered stones, wild garlic and mulch of the forest floor.

With this extended player, Bibio gives us space for quiet non-judgmental introspection. If you want to find a way to break from the restrictions of lockdown, and what seems to be the constant battery of the chaos foisted upon from every direction, ‘Sleep On The Wing’ is a perfect place to travel to. Bibio has given us the soundtrack to be asking not what, but who we want to be?

‘Sleep On The Wing’ is scheduled for release 12 June. Order a copy from Warp.