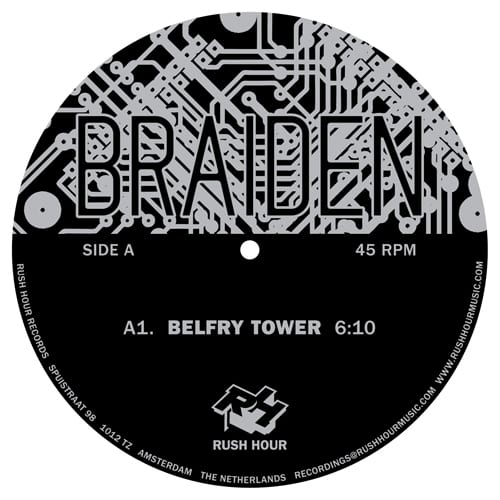 Perhaps it’s with Yuletide only a month away, and the tacky Iceland Christmas banquet advert now gracing our screens (if you could afford a banquet why would you buy it from Iceland?), but a new record from Steve Braiden does very much feel like the second coming. That may be overcooking it a bit (he ain’t no messiah, he wasn’t nailed to any cross), but I suppose it might just be a case of absence making the heart grow fonder.

Braiden initially leapt to our attention with the astonishingly good 12-inch ‘The Alps’, backed by an equally good remix by no other than Kassem Mosse. Great things will come of this boy, we all thought, nudging and winking to one another. Then, nothing. With next to no DJing gigs either, we were left thinking what if? But back to the present, and in what may well be a little thank you gesture for waiting two years to the month for any more to come from our mystery man, Braiden has returned with his second records, ‘Belfry Tower’, through Rush Hour.

In the time between ‘The Alps’ and ‘Belfry Tower’, Braiden’s stock has steadily risen through ardent anticipation, to the point that when it was initially announced that he’d be releasing some new material, it felt like, well, Christmas.

What is immediately recognisable on the first listen to ‘Paganini’ is its stripped down nature. This marks a significant point of interest, if anything because what made ‘The Alps’ so memorable was its boisterous, all-encompassing nature, remarkably hectic for something so simultaneously refined.

Here, Braiden has taken a sultrier route that is no less satisfying, and in the long run, perhaps more rewarding. Beginning with a vocal cut that sounds like it’s taken from 30’s ballroom party, it’s soon joined by patters of African drums and lounge funk keyboard chords. Showing touches of Pearson Sound and Joy Orbison in his arrangement (it’s no surprise Joy O picked him up for his Doldrums imprint with ‘The Alps’), the track unfolds at its own speed, unhurriedly, blissfully. Although the term ‘rewards repeated listening’ is sloshed around all too much, I cannot think of a current track that earns that statement more than ‘Paganini’. On the flip, ‘Belfry Tower’ displays a colder, but no less smooth, techno-orientated aesthetic, that whilst not standing as high and mighty as ‘Paganini’, is a more than worthy accompaniment.

So are we satisfied? Am I being sentimental? Biased because of how highly I rated Braiden’s first release? Well, no. Although ‘Paganini’ is clearly the main draw here, it still really is first rate stuff from a producer whose mythology shows no sign of abating. Or maybe I’m just a sucker for Advent.