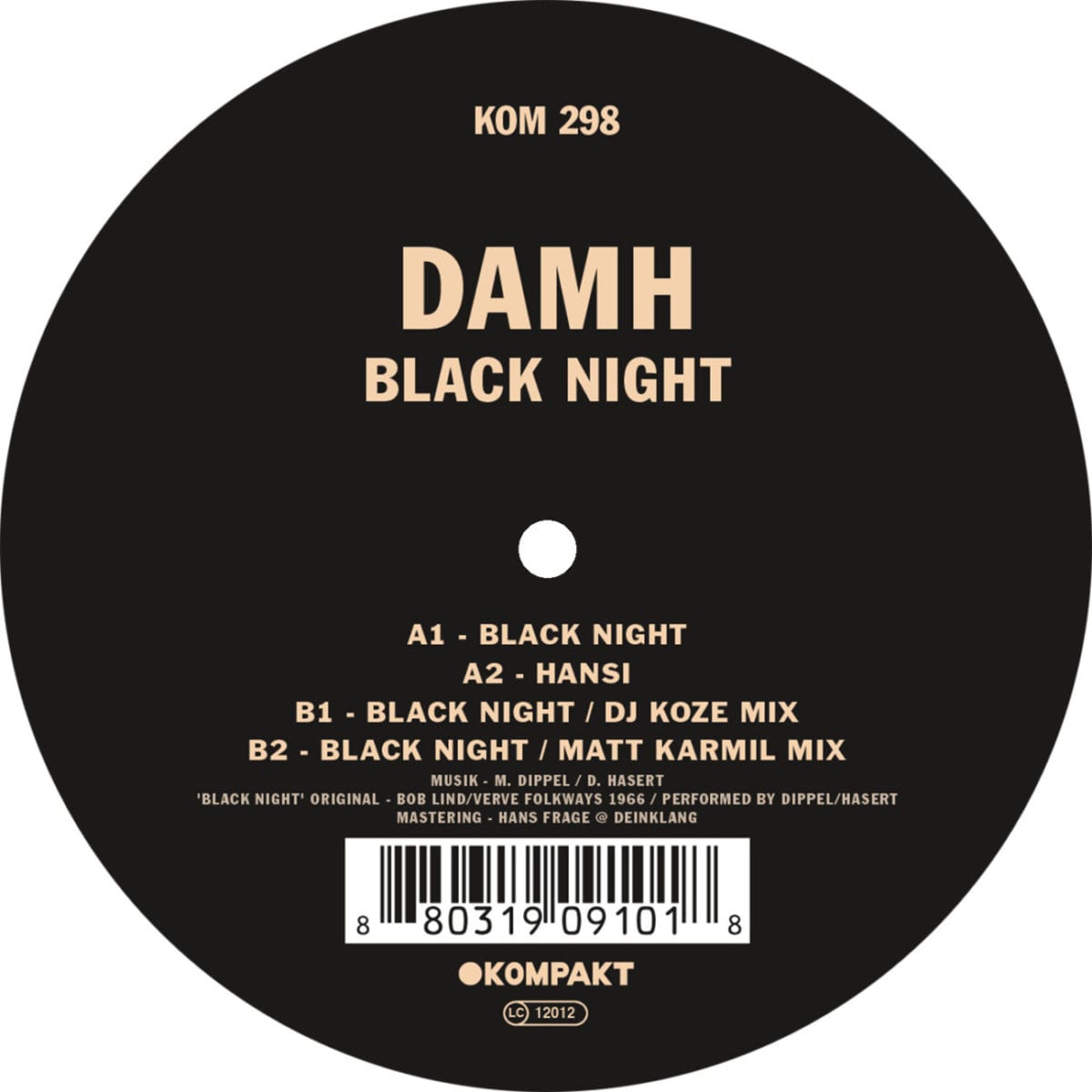 DAMH (Dog Ate My Homework), that name leaves you wondering. Nevertheless, as obscure as this alias sounds to your ears, that plate is the result of a collaboration between well known producers Ada and David Hasert – also known as Hasi – and Black Night is their radiant debut release as a duo on Cologne’s Kompakt imprint.

If the title of the EP first evokes the deepest night atmosphere and a sky devoid of stars, Black Night will rapidly get you to understand that it’s not that kind of night we are speaking of here. The title track actually sounds like the ideal soundtrack to those in limbo, like supremely contemplative moments when the sun is ready to rise but the moon isn’t quite ready to sink.

Bathed in this cottony atmosphere, a sugary feminine voice tells the tale of an ephemeral love whilst the synthlines take you on a trip from darkness, straight into the sun. The quality of the arrangements and the subtle motion initiated throughout the track by simple yet obsessive guitar chords gives the track an impressive and fascinating depth.

Although Black Night is an emotional track, Ada and Hasi don’t lay it on thick, instead choosing to carry on building their tracks in minute detail. Their music is a subtle balance between catchy melodies and intricate structures, seductive yet never vulgar.

Hansi is different in its rhythmic structure. Slightly darker, the second track offers a new perspective, more intimate. That same soft voice enchants the beginning of the track before the beat gets going. Vocals flicker between layers of synths and piano chords come sprinkling their melancholic flat. An absolute beauty surfaces from both tracks, rendered with class by those perfect arrangements. A masterclass in production.

Black Night remixes are the icing on the cake…so to speak. DJ Koze’s remix adds a new tint to the whole, breaking the rhythm and reconstructing a pattern of his very own, oscillating from a rather aggressive beat to a very melodious vocal reinterpretation, slicing vocals and making them sound like ancient incantations. A mesmerising, adventurous take. On his end, Matt Karmil opts for a rather progressive and filtered version of the instrumental, without the vocals.

With Black Night, DAMH have released one of the classiest house and pop EPs in recent times, polishing their tracks like gems, crafting the whole with such finesse that it leaves you begging for more. Superb.