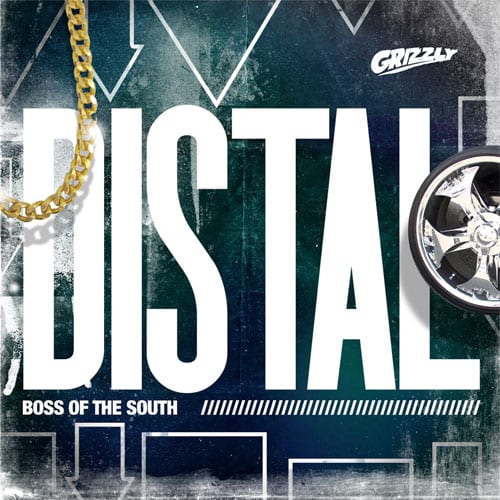 Atlantan producer Distal is a fast-rising name on the scene. His musical tendrils reach across the Atlantic to tap the lifeblood of the UK’s various bass mutations, without losing sight of the treasures of his own nation – from deep south Hip Hop to Chicagoan Juke. 2011 seems to be Distal’s year: releases are coming thick and fast, with a single on Tectonic (‘Angry Acid’/’French Science’) sure to cement his reputation as a young gun to be reckoned with. ‘Boss Of The South’, on Sinden’s digital label Grizzly, is a fine addition to a discography that spans genres but increasingly forges its own distinct identity.

The title track plants itself somewhere between ’05 Loefah and DJ Deeon, its black-hole sub and sinuous congas enslaved to a sleazy 140bpm bounce. Every beat of its five minute duration is packed with colour and detail, teetering on the edge of overcrowdedness but somehow maintaining balance. ‘Coke Bottle’ drops the tempo to housier climes, but doesn’t suffer on the energy front. Hyperactive digi-toms and those fast-becoming-trademark hoover synth stabs are smothered in woozy, saccharine pads, before being broken down and rebuilt into a half-time rave behemoth. Both tracks take an ADHD approach to structure that’s pulled straight out of hardcore rave: verging on incoherent but irresistible on the dancefloor.

The set is rounded off with a clutch of remixes. Two house reworkings of the title track take different tacks: label boss Sinden goes for a rigid quickstepper, energetic but rudderless, while Capracara’s is like a breath of fresh Chi-town air drifting up from the bottom of a well – reverbed up to the nines and outrageously groovy. Juke renegade Wheez-ie rounds off the package with a frenetic reworking of ‘Coke Bottle’, ramping up the tempo and injecting a hefty dose of rave euphoria into its bloodstream. Party music from end to end.