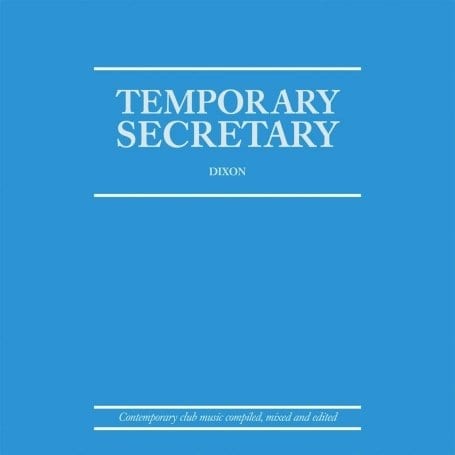 Steffan Berkhahn aka Dixon serves up his take on a mix CD, ‘Temporary Secretary’ which in my opinion is one of the best compilations that i’ve heard in 2009. The man behind Sonar Kollektiv’s sub label Innervisions is no stranger to mix CD’s. In 2007 Dixon released under Get Physical ‘Body Language Vol.4‘. Following the footsteps of M.A.N.D.Y., DJ T and Jesse Rose. In this he showcased exactly what he is compable of, by delivering an absolutely stellar mix, featuring Tom Maas, Owusu & Hannibal, Thom Yorke, Herbert and more. This set the standard and now he returns with an exceptional mix during a time when accessing these tunes couldn’t be easier.

Temporary Secretary has been applauded for its sonic voyage, however the one thing that has stuck to this release is the simple fact…why bother? We live in a time where technology has pushed everyones ability to consume new music and especially downloading it to the most advanced level we can expect. Blogs are teaming with content, you tube, torrentz, P2P file sharing, its draining the music industry sales, and has made artists explore different ways to sell themselves. So the question is, why has Dixon started pushing a series of mix CD’s on his label Innervisions?

There are many answers to this, but the one that stands to me is his unquestionable experience of melding tunes together. Dixon entered the German club scene back in the early 90’s, without the reliance of online mixes, he had to prove himself behind the decks at local clubs, playing to the same loyal crowd week after week. There was no room for error, he had no choice but to deliver the goods time after time, perfecting his sets, to find the ultimate way to end what should be a lasting experience.

Essentially Dixon is a DJ, so making a mix CD is naturally what he’s good at, but Temporary Secretary is no normal mix. Dixon’s A & R work for Sonar Kollectiv‘s sub label Recreation Records allowed him to discover new talent, introduce new DJ’s to Berlin, and experiment with his own take on house music. It also allowed him to tap into unexplored terrotries of music production and remixing. In 2005 Dixon founded ‘Inner City’ a monthly night at Berlins favourite tower block / club in Alexanderplatz, the ‘Weekend Club‘. Dixon exploited this new found freedom and constructed marathon sets designed to both ease the crowd from the languid early hours to the hype of prime time frenzy.

‘Temporary Secretary’ is a remarkable mix , it contains songs that should not be blended together naturally. Through Dixon’s process of sampling and looping these tunes he has manged to pave a path for these tracks in the smoothest manner. Track after track he pricks your ears there’s no getting away from the fact that the mix is getting better and better, leaving a big smile on your face. I beg you forget why bother, buy this!