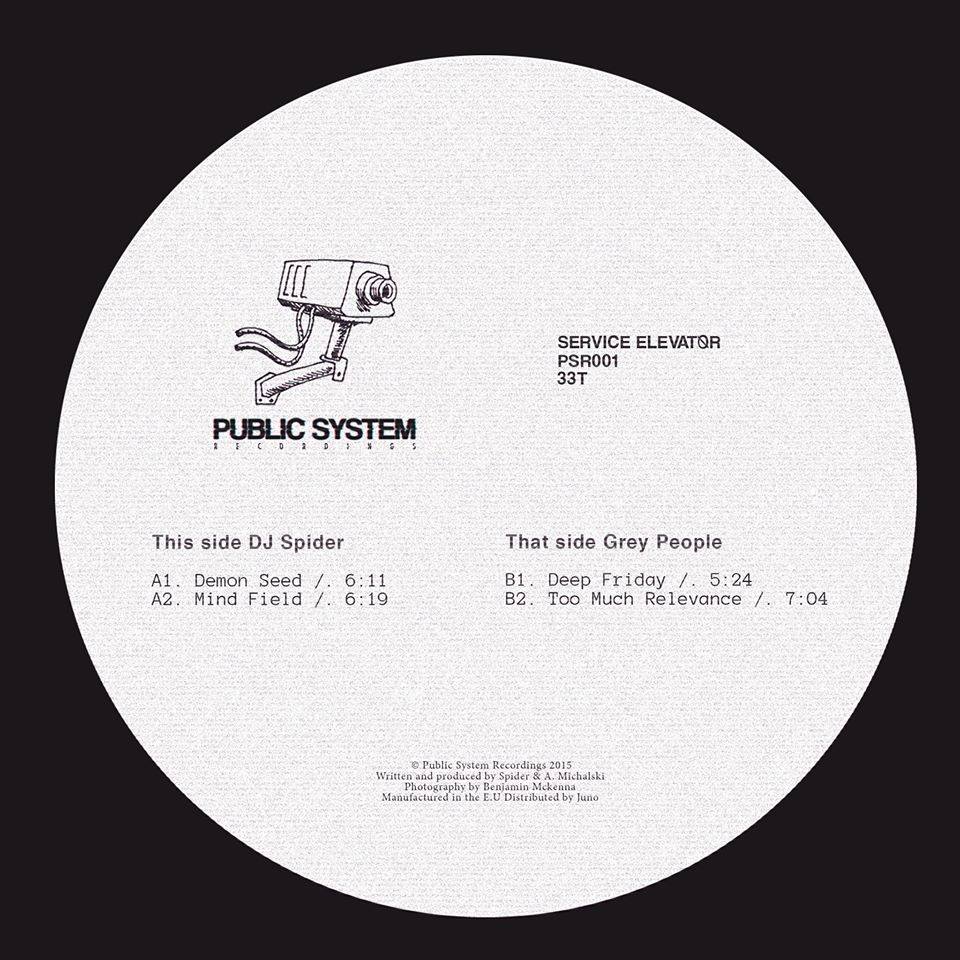 With DJ Spider and Grey People, the young Paris via Melbourne-based label Public System banked on two surefire and quite undervalued producers, responsible for some of the finest, equally danceable and digressive techno slices of the past years – check out GP’s “Sludge Ball“ and ‘Welcome To My Chevy‘, you’re in for a treat. Between their taste for freerolling, trudging rhythms and more melodic, hypnotic bows, the guys manage to reconcile well-rounded club functionality with mostly non-conformist sonic ramblings.

On side A, DJ Spider’s Demon Seed seeks and reaches a deep, trance-y apex with some mesmerizing moves. A sublime body let-go fueled on shamanic incantations, ayahuasca-induced visions and emotional pad sequences. Pummeling kicks surface from misty, ambient-indebted scapes like the last beaconing flares marking the path towards altered states of consciousness.

It’s an implacable climb through a sturdy 4 / 4 groove model, each loop broadening its hank into a further level of awareness, turning the stomping boom of its drum work into an Ent-like, forest spirit pulsation but more importantly neutralising any down-to-earth, encaging body experience whilst expanding the acuity of its listener’s mind down to unfathomable depths.

Mind Field plays a different atmosphere, draping itself in velveteen layers while some snazzy piano keys graciously liven up the percussive coldness of tight-laced snare rolls and thrumming hats. More steely, the track rests upon some nicely executed off-kilter programming but doesn’t fully deploy, except for its dopey pads to reel off their delicately-tinged melancholia. Not the highlight here but a more than decent support track for sure.

Grey People then takes control of the flip with Deep Friday, returning to a faster-paced, more club-oriented form of techno. The track gives vent to a mix of emphasized screeching tyres samples and grinding elastic kicks interspersed by a forward-moving motif of high, clear-toned congas and fragile synth accents. Straight in the vein of what the Nashville producer got us used to, the track delivers some intense arrhythmic impetus. A nerve-racking ride.

Closing the EP, Too Much Relevance bores into an acid-filled pool of abrasive basslines and browbeating drumwork. Alternating more or less percussion-laden phases, the track’s main quality lies in its constant surging of raw, boiling matter, bulldozing its way through to the nearest dancefloor with an avid will to confront. Rolling their pampres in and around pillar-like, pumping beats, the acidic frenzy promises to kick some butts, rave-y style.

A very convincing first instalment and an interesting addition to Grey People and DJ Spider’s fine catalogue, this first EP also marks Public System’s entrusting of its future to confirmed producers. Sailing up the Detroit via Chicago rapid, the antipodes-split label’s choices go past the current hype. It’s scribing its own history, astride past and future, paying tribute to the American legacy whilst revealing exciting outlooks for tomorrow. Keep your ears on the ground for further PSR records, the trip promises to be well worth the ticket.

Service Elevator is out now, order a vinyl copy from Juno.