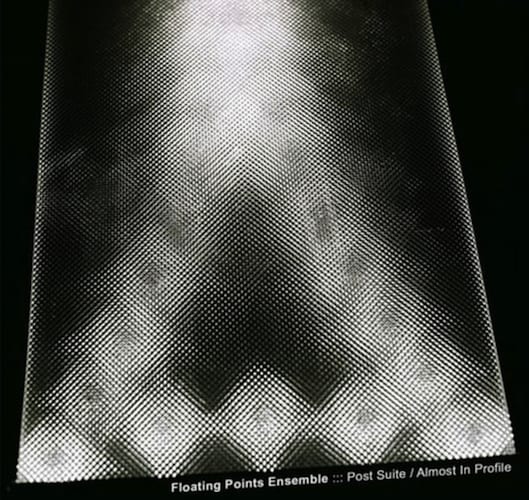 For their 20th anniversary celebration release, Ninja Tune offers up a 10” double-A from classically trained Sam Shephard, aka Floating Points, and his award-winning 16-piece ensemble. Shephard composed and arranged both tracks, which were recorded earlier in the year at the legendary Abbey Road Studios. The result is a masterful and dramatic exploration of the emotional tension between joy and melancholy. He has done so by successfully weaving elements of funk, hip -hop. jazz and classical music over two tunes that could easily be the first and last tune of an album

‘Post Suite’ begins with a melodic motif tenderly etched out on Shephard’s Rhodes, which is our emotional anchor, our ‘floating point’ of perspective. This humble call receives a righteous response from sweeping eastern strings, then repeats with guitars and middle eastern percussion until it lifts like a veil dropping into a taut rare groove – what can best be described as ‘astral funk’, reminiscent of Alice Coltrane, or Four Hero. Fatima’s vocals embody the overriding sentiment of the track – unbridled exuberance and bliss, soaring above the in-the-pocket groove and guitar licks as she exalts “I feel joy”.  Uncertainty is juxtaposed with glimmers of hope and the synergy resulting from this dynamic is transcendental, and a joy to listen to. As the track continues to build, strings and brass provide constant interaction and support to Fatima‘s mantra-like outpourings of emotion; the groove purposefully alters to an insistent triplet feel, we are ‘chasing the sunlight’, ascending.

Like Prometheus, who stole fire from the gods, our perspective is suddenly brought down to earth. ‘Almost In Profile’ begins on a low note, suspending the listener in a kind of electro-acoustic limbo, a mono-tonal and ceremonial space composed of drawn out low strings and abstract bass. The Rhodes returns, this time more contemplative and hopeful. Softly we are evaporated, on a bed of strings and fluttering flute, to the sunlight we were chasing, to angelic heights inhabited by Fatima’s soulful vocalizations, to a state beyond words. We seem to be literally floating, enshrouded in melody and light as the celestial waltz of strings and brass encircle one another. The drum patterns underpinning the piece intensify and shift grooves, evolving into funk of a higher order (9/8?). Apparently unable to contain itself, the track peaks for a short period until it finally bursts, drifting to a close where “Post Suite’ tentatively begins: with the Rhodes, and the reminder that joy is never too far away.

Sam Shephard has sought to transcribe into music the most fundamental truth of the human condition – the oscillation between the states of joy and melancholy. This is self-evident not only from the ‘lyrics’ –which are markers guiding you through the tactile space to which you are exposed – but through the music itself. Achieving that makes this an exceptional piece of spiritual art, one which will truly stand the test of time. With support from Kyle Hall, Theo Parrish, Four Tet, Kode-9 and Mary Anne Hobbs, this vinyl-only release will be highly sought by any one wishing to hear music at its finest, and devoted Ninja tunes fans alike. Sam Shephard and his Floating Points Ensemble have a bright future ahead of them, and that that can only be a good thing for the future and back catalogue of British music.  Here’s to another 20 years of Ninja Tune!