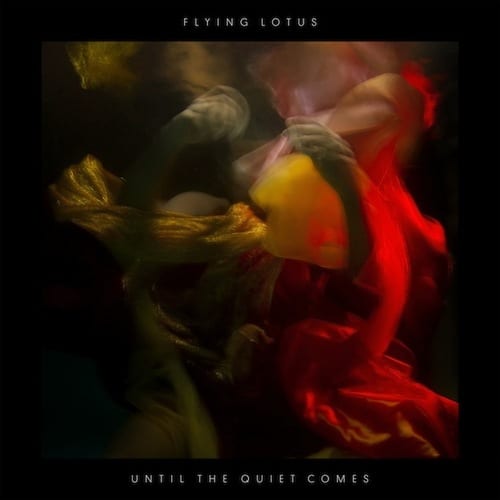 One of the most celebrated artists of his generation, Flying Lotus’ fourth LP sees him exploring introverted, open-ended themes. The producer’s cosmic rubber stamp still permeates through the pungent atmospherics of Until The Quiet Comes, but swaps the unrelenting density and pressure of Cosmogramma for a more nocturnal, streamlined aesthetic.

Respected journalist and author Simon Reynolds described Ellison’s third album as the “skittering scatterbrain sound of networked consciousness…Cosmogramma reflects the dispersed, fractured sensibility of digital modernity”. It’s a telling description of the sheer instability the album projected onto the listener. Until The Quiet Comes represents a significant departure from that sprawling cacophony. It’s a brooding, tranquil record, relatively peaceful and content within itself. It evokes fleeting strands of Ellison’s previous work whilst still establishing it’s own concepts and unique identity within his discography.

A mystical, framed dreamworld is constructed over the albums beginnings. Opener ‘All In’ evokes twinkling, sanguine melodies that flutter wonderfully over the stuttering backbeat. The employment of vocalists has also morphed since Cosmogramma, FlyLo harnessing his vocalists into accompanying instruments – The rousing percussion merging with Erykah Badu’s cries on ‘See Thru To U‘, for example. Thom Yorke also becomes an unsettling piece in the puzzle on the fantastic ‘Electric Candyman’, rather than the emotive pallbearer he was on ‘And The World Laughs With You’.

The peculiar ‘Putty Boy Strut‘ follows the bombastic ‘Sultan’s Request’, the jittery handclaps and chipmunk squeaks providing a sharp intake of energy after it’s lumbering predecessor. There are some genuinely inspiring moments belonging to the succession of tracks midway through the album. Title track ‘Until The Quiet Comes’ is hyperactive yet serene, representing one of the most intricate and quietly moving moments on the LP. ‘DMT Song’ sees virtuoso Thundercat croon into a chaotic soundscape, a jungle of kaleidoscopic harmonies. The slow, sensuous build up into the inter-galactic grooves of ‘The Nightcaller’ showcases the producer’s genius, a track that harks back to the early days of 1983 and the Reset EP, and is the most playful and (arguably) successful piece on the record. It’s this sequence that combines Ellison’s past and his present into untethered, truly exciting listening.

You still get the unmistakable impression that Until The Quiet Comes is an LP only Ellison could conjure up. His utterly unique palette is uncompromised, and this latest effort boasts some of the most exquisite design of all his records. It’s by no means perfect, however – fractured and disjointed in parts, it doesn’t contain the same singular thematic fluidity that characterised Los Angeles or Cosmogramma. Whether or not this new direction is challenging enough for some listeners remains to be seen.